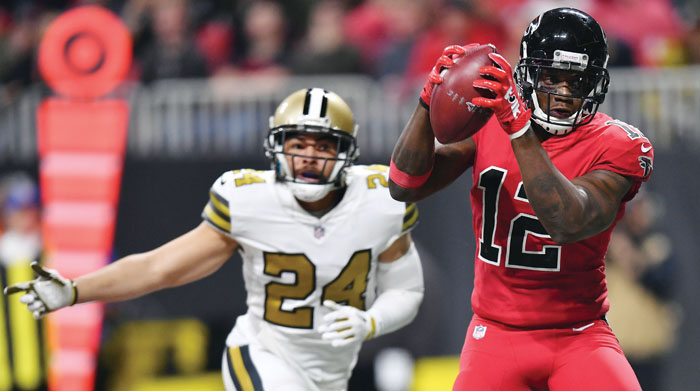 ATLANTA (AP) — Deion Jones made a leaping interception in the end zone with 1:25 remaining and the Atlanta Falcons held on for a crucial 20-17 victory over the New Orleans Saints on Thursday night, setting up a three-way race for the NFC South title.

Matt Ryan shook off three interceptions to guide the Falcons to Matt Bryant’s 52-yard field goal with 3:49 to go, snapping a 17-all tie.

The Saints (9-4) were in position to pull out the victory, driving to the Atlanta 11 after Drew Brees converted on fourth-and-1 with a quarterback sneak. On second down, Brees attempted to hit tight end Josh Hill in the back of the end zone.

Jones had other ideas. He soared to make the pick , landing flat on this back but holding on to the ball while his teammates mobbed him.

The Falcons (8-5) climbed within one game of the division-leading Saints with three weeks to go, as New Orleans squandered a chance to build a three-game lead on the defending division champs. Atlanta is back in the race and gets another crack at New Orleans when the teams meet in the next-to-last week of the regular season at the Superdome.

The Carolina Panthers (8-4) are also right in the thick of things.

Ryan had three interceptions in a stretch of nine plays at the end of the first half and the beginning of the second. But he tied the game with an 8-yard touchdown pass to Mohamed Sanu with 9:55 remaining , finishing 15 of 27 for 221 yards.

Brees was 26 of 35 for 271 yards and two TDs, but he was kicking himself for trying to force one at the end.

On the opening possession, New Orleans lost half of its dynamic 1-2 punch in the backfield when rookie Alvin Kamara took a shot to the helmet and staggered off with a concussion.

Kamara was averaging 7 yards per carry and providing a huge weapon in the passing game, averaging 10.2 yards on 60 receptions. When he went out, Mark Ingram was left to carry the load as the “Boom and Zoom” duo became simply “Boom.”

Ingram was held to 49 yards on 12 carries as the Saints largely abandoned one of the league’s top rushing attacks. Michael Thomas had 10 catches for 117 yards and a TD .

With Atlanta trying to drive into position for a tiebreaking field goal in the waning seconds of the opening half, Ryan threw a terrible pass that was picked off by rookie Marshon Lattimore, who was back in the lineup after missing two games with an ankle injury.

Lattimore returned it 33 yards to the Atlanta 29 with 4 seconds remaining, setting up Wil Lutz to boot a 47-yard field goal as time expired. But the Falcons caught a break when the Saints failed to have seven blocked on the line of scrimmage, and the penalty resulted in a 10-second runoff that ended the half with the score tied at 10.

It was a brutal night for the Saints, which is sure to raise more questions after the health risks of playing on Thursday nights.

In addition to Kamara’s injury, New Orleans lost another offensive guard and three starters on defense.

Guard Senio Kelemete, filling in for injured starter Andrus Peat (groin), left with a concussion. That forced the Saints to go with Josh LeRibeus, the backup center.

Falcons: After a short turnaround for the Thursday night game, Atlanta has an 11-day break before returning to action with a Monday night contest at Tampa Bay (4-8) on Dec. 18.