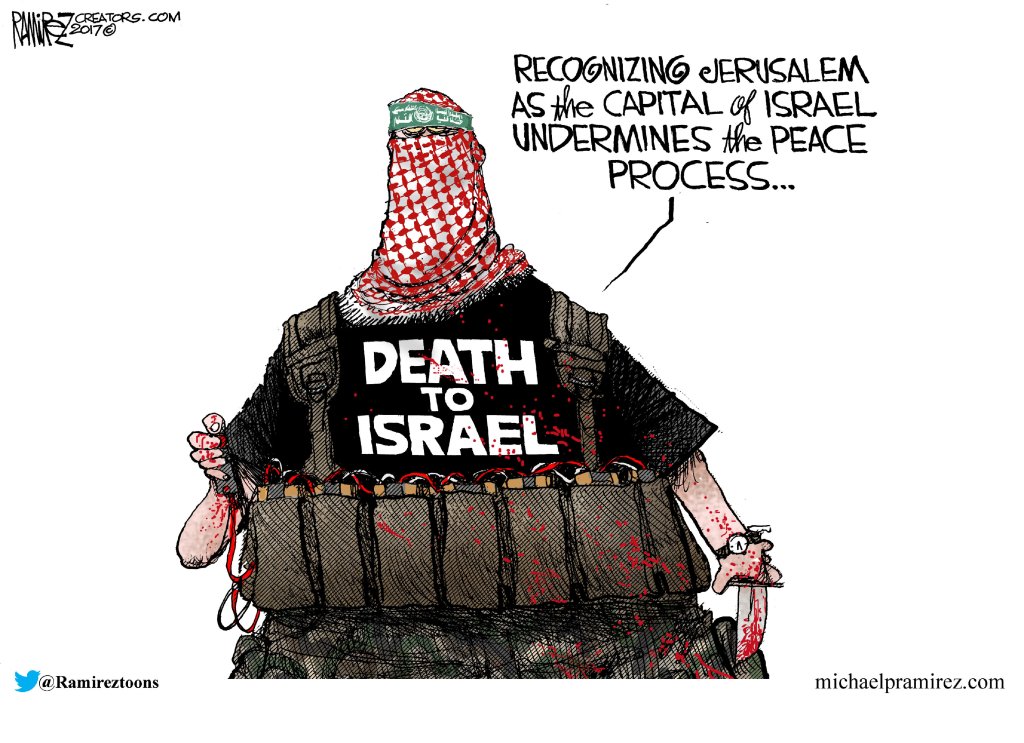 If he believes that, he has fallen into the trap numerous and more seasoned diplomats have experienced.

The most obvious impediment to peace in the region is a religious one. A visceral hatred of Jews is promoted in Palestinian media and many mosques and schools throughout the region. The destruction of Israel and elimination of Jews from land that has been historically and legitimately theirs for thousands of years is their goal. Radical Islamists believe Allah has ordered it. Why would they risk perdition by violating his command?

Duplicity and deception are the coin of the realm in the Middle East. It is why many Palestinian leaders say one thing to the West and another to their own people.

Here is one of many examples, which contradicts what Palestinian leaders say to Western ears. In a 2013 interview on Syrian TV, Abbas Zaki, a close associate of Palestinian President Mahmoud Abbas, said the Palestinian Authority would not enter into any peace agreement with Israel unless it includes Israel’s withdrawal to indefensible 1967 borders. Zaki stated: “Even the most extreme among us, Hamas, or the fighting forces, want a state within the ‘67 borders. Afterward, we [will] have something to say, because the inspiring idea cannot be achieved all at once. [Rather] in stages.”

In other words, incremental steps toward a shared goal: the elimination of the Jewish state, which Iranian mullahs have described as a “cancer” in the Middle East.

Does this sound like the language of people who wish to live in a peaceful state adjacent to Israel? A person not deceived by the mirage of a Middle East peace agreement should consider the numerous and unreciprocated concessions Israel has already made to advance the “peace process,” which seems more like a war process from the Arab and Palestinian perspective.

This is all about increasing pressure on Israel to “do more,” as if Israel were the one advocating genocide. Many Palestinian and Arab leaders hate Israel (and Jews) not for what they do or don’t do, but because they exist. If Mr. Kushner believes he can be a peace broker without understanding and accepting this basic fact, he is bound to end up like all the others who have inserted themselves into the region.

What is the answer, if there is one?

Writing in the Israeli publication, Al-Monitor, following President Trump’s visit to Saudi Arabia in May, columnist Akia Eldar says: “…(an) American president may be able to bring the sides to the table, if he is lucky, but they will only eat what is on it if they are dying of hunger. He would have realized that the hunger for peace only comes after the thirst for blood is quenched.”

Isn’t that what happened when Egyptian President Anwar Sadat decided enough blood had been spilled and made peace with Israeli Prime Minister Menachem Begin?

As unlikely as it might seem, perhaps the road to settlement and stability might go through Riyadh. While Saudi Arabia has been a principal exporter of an extremist view of Islam through its media, funding mosques in Western countries and textbooks for school children that promote anti-Semitism, Saudi Arabian Crown Prince Mohammed bin Salman, has said he wants a return to a more “moderate Islam” that allows for peaceful co-existence with other religions and the world.

One eagerly awaits such a transforming message within Islam, but will other Islamic countries who also hate Jews and Israel accept this move toward peaceful co-existence when, and if, it comes?

Does Jared Kushner fully understand what he has gotten himself into?