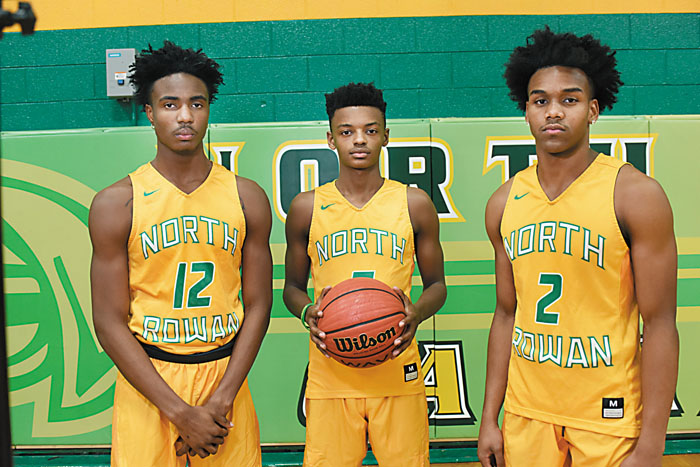 SPENCER — With a new coach, new playbook and new conference, it looks like North Rowan is going back to school.

Amid all the confusion on Whitehead Avenue, where Martin Unger has replaced Andrew Mitchell in a swirl of secrecy, the Cavaliers must focus on the task ahead — contending for a 1A Yadkin Valley Conference title.

“Nobody really knows what happened and we still don’t,” said Unger, a basketball lifer who was plucked from North’s guidance department and named coach on Oct. 28, three days before the season’s first practice. “A lot of people think this is a backdoor deal. I had to call a meeting and assure everyone it wasn’t.”

Unger arrives with an impressive resume. He’s worked as an assistant coach at Division I Nicholls State, Richmond and Missouri-Kansas City and was formerly a recruiter for Florida State. In the late 1990s, while earning a degree in sociology, he was a student assistant at Western Carolina. Most recently, Unger served as head coach at Belmont Abbey for two seasons. He’s the real deal — and he’ll infuse a college-coach mentality to practice, preparation and game-day strategies.

“High school is different,” Unger acknowledged, following a well-structured, pre-Thanksgiving practice. “This is going to be a work-in-progress. The offense and defense that I run — and have taught for years — is kind of complicated. For some of these kids, it’s a bit of a shock. There will always be a base they have to stay within.”

North’s roster includes enough flair, grit and resolve to succeed. Six lettermen return from a team that went 14-12 overall, 7-3 in the CCC and qualified for the 2A state playoffs last winter. Junior forwards Brevin Goodlett (6-3, 190) and Dayjuwon Cooke (6-4, 210) have prominent roles as the Cavs take on the hard-to-figure YVC. Goodlett rebounded with wrecking ball force last season after transferring from East Rowan. An all-county honorable mention pick, he averaged 6.9 points-per-game. Cooke is an all-star waiting to be invited. Unger said he “has more skill than you would think. I love guys that defend, rebound and get after it.”

The backcourt will be manned by the two-headed monster of Quintous Smith, Jr. and newcomer Derrick Page. At 6-3 and 190, Smith is a handful —- a left-hander who can shoot, pass and create opportunities. Oh yeah, and he caught seven touchdown passes for North’s 8-4 football team. He can also spell Goodlett and Cooke in the front court when needed. Page, a 6-2 junior, is forging his own path and just needs seasoning. He can play both guard positions. “I would love the ball in his hands,” Unger said. “But he’s such a good scorer.”At center, North features a future award-winner in sophomore Chaz McCombs (6-5, 220), a returning player who cut his teeth playing in 12 varsity games last season. A football defensive end who plays without fear, he’s got the chops Unger appreciates. “He should kill people in the post,” the coach said. “Very, very skilled and capable player. If anything, he’s thinking too much right now.”

First off the bench is six-foot senior Josh Ellis, another football double-dipper considered Unger’s best defensive player. Senior Dajuan Clement (6-3, 185) is a good-sized swingman who will compete for playing time and junior David Broaddus (5-7, 150) is a transfer from East who can shoot and defend.

Unger fancies the Cavs’ hard-nosed defensive make-up. “I’m predominantly a man-to-man coach,” he revealed. “We’re gonna get up in your face and guard you. It’s all about energy and effort and I’m very encouraged by what I’ve seen here. These guys get after the ball and rebound the heck out of it.”

North’s offense remains an evolving process. “We have smart individuals, guys who can shoot and guys who can get out and run,” said Unger. “They’re picking up the offense, so eventually, we’ll become a very good offensive team. We’re not there yet.”

Then there’s the Unger Factor. As a coach, he seems more textbook than novel, more buttoned-down than open collar. The court is his classroom and he expects your full attention.

“They’re getting to know me and I’m getting to know them,” he said. “We’ll be doing that all season. They’re picking up the terminology, the attention to detail. If we stick together and keep improving, this will be a great season.”

Dayjuwon Cooke, junior forward — Unger says he plays his tail off in practice and hopes that translates into monster games. A second-story guy who often plays above the rim. Can turn a spark into a bonfire.

Josh Ellis, senior guard — Sixth man who can play shutdown defense. Quick feet and keen sense of anticipation make him a valuable commodity. One of only two seniors on the roster.