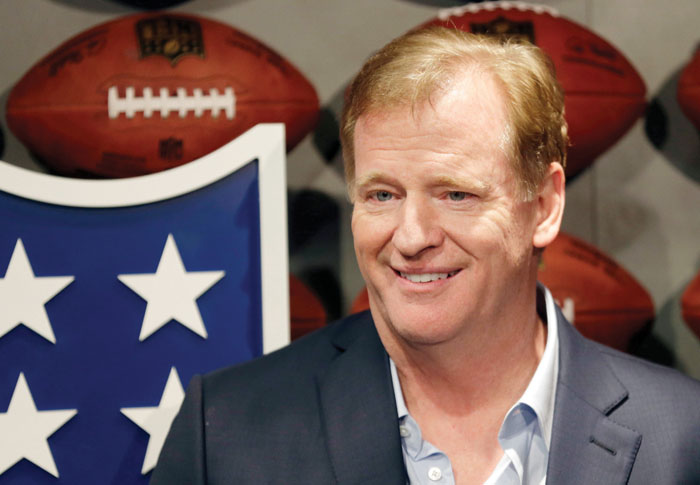 FILE - In this Nov. 30, 2017, file photo, NFL Commissioner Roger Goodell poses for a picture at the opening of "NFL Experience" in Times Square, New York. Goodell has signed a five-year contract extension to keep him as commissioner of the NFL through 2024. A memo from the NFL's compensation committee to team owners and obtained by The Associated Press confirms that Goodell and committee chairman Arthur Blank, owner of the Atlanta Falcons, have signed the extension. Goodell took over for Paul Tagliabue in 2006. (AP Photo/Seth Wenig, File)

NEW YORK (AP) — Roger Goodell has signed a five-year contract extension to remain commissioner of the NFL through 2024.

A memo from the NFL’s compensation committee to team owners and obtained Wednesday by The Associated Press confirms that Goodell and committee chairman Arthur Blank, owner of the Atlanta Falcons, have signed the extension.

That extension has been a source of controversy because Dallas Cowboys owner Jerry Jones objected to the process.

All 32 owners approved in May the compensation committee’s power to negotiate and sign a deal with Goodell, who replaced Paul Tagliabue in 2006.

Since then, the league’s total revenues have more than doubled to $14 billion.

A person familiar with the contract told The Associated Press it is worth almost $200 million, with a base of $40 million. But the deal is incentive-laden, the person added, speaking on condition of anonymity because the contract numbers are not made public.

Among those incentives are continued increases in revenues, stable or rising television ratings, a new labor agreement with the players — the NFL-NFL Players Association deal expires in 2021 — and how much the NFL gets in rights fees when it renews its broadcast contracts.

Goodell earned nearly $32 million in 2015, the last year in which public records for the NFL are available.

“Our committee unanimously supports the contract and believes that it is fully consistent with ‘market’ compensation and the financial and other parameters outlined to the owners at our May 2017 meeting, as well as in the best interests of ownership,” Blank wrote in the memo.

“We also have expressed in those conversations our strong and unanimous belief that we should proceed to sign the agreement now, consistent with the unanimous May resolution and to avoid further controversy surrounding this issue.? We are pleased to report that there is a nearly unanimous consensus among the ownership in favor of signing the contract extension now.”

That would not include Jones, whose objections surfaced publicly after his star running back, Ezekiel Elliott, ran out of legal options to appeal a six-game suspension handed down by Goodell under the NFL’s personal conduct penalty.

The NFL’s next owners meeting is in Dallas next Wednesday. Jones had hoped to delay the new deal with Goodell until then, when he could personally raise his concerns to other owners.

Also on the compensation committee are owners Clark Hunt of Kansas City, Robert Kraft of New England, John Mara of the New York Giants, Bob McNair of Houston and Art Rooney of Pittsburgh.