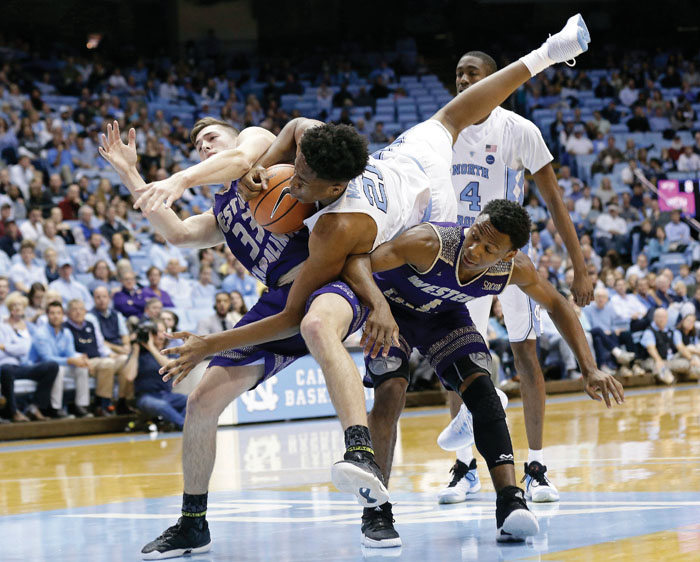 Luke Maye had 12 points and 12 rebounds while UNC hit a season-high 16 3-pointers to beat Western Carolina 104-61 on Wednesday night, turning in a strong offensive performance to head into an 11-day exam break.

It allowed Williams to rely on a bit of analysis he’s fond of throwing out on good shooting nights.

“Everything looks great when the ball goes in the basket,” Williams said, “and it went in the basket tonight.”

The Tar Heels came into the game shooting about 36 percent from behind the arc, though it marked the third time in the past four games they had hit at least 42 percent on 3s.

The difference was volume; they hadn’t made more than 11 3s in a game this season.

“I think it’s something teams have to worry about because we have so many shooters,” said Kenny Williams, who scored 13 points and made 3 of 4 3-pointers. “We can throw in a lineup where you have all five guys that can shoot the ball. And then it’s more dangerous because it spreads the floor.”

Still, the Tar Heels put the game away quickly with more than just 3s. They ran off 20 straight points during a 33-3 first-half run, shooting 64 percent by the break.

“They were draining just about everything they shot, both halves,” Western Carolina coach Larry Hunter said, “They shoot like that, … they’re going to be a tough out for a lot of people.”

Deriece Parks scored 13 points for the Catamounts (3-7), who made two quick shots for a 5-0 lead. But they missed 16 of 17 shots and had an 8-minute scoring drought as the Tar Heels took over.

WCU: The Catamounts had already lost twice to power-conference opponents, falling by 28 points at both Clemson and Minnesota. This time, the Southern Conference program found itself trailing by 27 at halftime on the way to falling to 3-33 all-time against current Atlantic Coast Conference members.

UNC: North Carolina has had a packed-full schedule in recent weeks with seven games in 14 days, including its only loss to Michigan State in the PK80 Invitational in Portland, Oregon, on Nov. 26. At least now the Tar Heels will have some time to get in more practice, regroup and recharge a bit during an 11-day exam break.

SECOND AT THE POINT

The team announced before the game that sophomore point guard Seventh Woods is out indefinitely due to a stress fracture in his left foot, though he won’t need surgery. That did open more time for freshman Jalek Felton, who had a team-high 15 points and five assists.

Five players hit 3-pointers for UNC, with Felton making all four of his attempts. Fellow freshman Andrew Platek (3 of 5) and Williams each hit three, while Maye, Berry and Brandon Robinson each hit two.