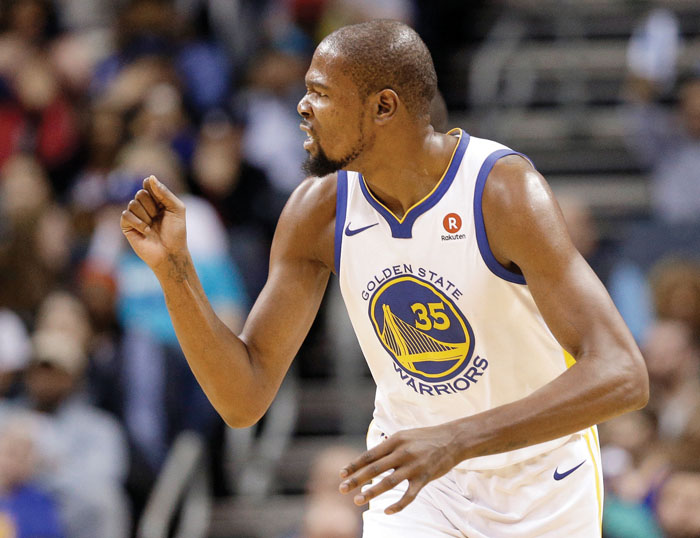 Golden State Warriors' Kevin Durant reacts to making a dunk against the Charlotte Hornets during the first half of an NBA basketball game in Charlotte, N.C., Wednesday, Dec. 6, 2017. (AP Photo/Chuck Burton)

It was Durant’s first triple-double of the season and his second since joining the Warriors before last season.

Klay Thompson scored seven of his 22 points in the fourth quarter for the Warriors, who have won five straight overall and seven in a row against the Hornets.

Curry will be sidelined for about two weeks with a sprained ankle, while Green is nursing a sore shoulder.

Durant set the tone, scoring 16 points on 6-of-9 shooting in the first quarter to help the Warriors build a 26-18 lead. The edge increased to 26 in the second quarter following back-to-back 3-pointers by Nick Young, who had 10 points.

Charlotte’s two big men off the bench — Cody Zeller and Frank Kaminsky — both left with injuries and did not return. Kaminsky injured his ankle in the first quarter, and Zeller left in the fourth with a strained left knee.

Charlotte cut the lead to 11 at the end of the third quarter behind 10 points from Batum but didn’t make a serious run at the lead thanks to a strong fourth quarter from Thompson.

With Curry out, the Warriors shared duty on bringing the ball up with Durant, Quinn Cook and Andre Iguodala all working as pseudo point guards.

Warriors: Cook got the start at point guard in place of Curry and had eight points and three assists. … Patrick McCaw did not play because of a bruised nose.

Hornets: Stephen Silas coached with Steve Clifford out indefinitely while dealing with a health issue. … Charlotte attempted one free throw in the first half after attempting 40 on Monday night against the Orlando Magic.

CLEVELAND (AP) — LeBron James drained a 3-pointer with 15 seconds left and finished with 32 points as the Cleveland Cavaliers tied a franchise record with their 13th straight win, 101-95 over the Sacramento Kings on Wednesday night.

James, who changed his sneakers three times, also had 11 rebounds and nine assists, helping the Cavs rally from a 14-point deficit in the third quarter to remain unbeaten since Nov. 11. His decisive 3-pointer in the final minute was in the face of JaKarr Sampson, who had jawed with James earlier.

This one wasn’t easy. The Kings gave the Cavs everything they had, but couldn’t contain James in the clutch.

NEW ORLEANS (AP) — DeMarcus Cousins had 40 points, 22 rebounds and four blocks, and the Pelicans won for the second time in three games without Anthony Davis.

The Celtics played without Jaylen Brown and Marcus Morris. Brown sat with an inflamed right eye, while Morris was out due to left knee soreness.

NEW YORK (AP) — Courtney Lee scored 24 points and Kristaps Porzingis had 18 after a slow start in his return to the lineup, helping the Knicks to the win.

Moving from forward back to shooting guard in Tim Hardaway Jr.’s absence, Lee fell just shy of his season high and was the catalyst in a big run to open the second half that largely determined the game.

Porzingis came back from his sprained right ankle and illness, but the Knicks announced Tuesday that Hardaway had a stress injury in his lower left leg and had begun a treatment and rehabilitation plan. He will be re-evaluated in two weeks.

Marc Gasol had 17 points for the Grizzlies, who were playing for the first time since ending their 11-game skid with a victory over Minnesota on Monday.

MILWAUKEE (AP) — Giannis Antetokounmpo had 25 points and nine rebounds, and Milwaukee won for the fourth time in five games.

Khris Middleton had 21 points for the Bucks, including four free throws in the final 20 seconds.

The Spurs shot 52.9 percent from the field and had seven players score in double figures. Bryn Forbes had 17 points, and Rudy Gay finished with 16 in San Antonio’s eighth straight win over Miami.

With Kawhi Leonard’s return looming from a season-long absence due to a quadriceps injury, Aldridge led the Spurs in scoring for the 20th time in 25 games.

Tyler Johnson led Miami with 25 points, and Dion Waiters had 22.

INDIANAPOLIS (AP) — Victor Oladipo scored 27 points, including a clutch 3-pointer with 31.1 seconds left that lifted the Pacers to the comeback victory.

The lowly Bulls led by as many as 17, but couldn’t hold off the Pacers in the final moments. Oladipo’s 3 gave Indiana its first lead at 97-96, and he tacked on a free throw with 12.8 seconds left.

ORLANDO, Fla. (AP) — Evan Fournier scored 27 points before departing with a right ankle injury, and the Magic rallied for the overtime win.

Aaron Gordon had 24 points and 15 rebounds for Orlando, and Nikola Vucevic added 22 points and 16 rebounds.

Fournier, the team’s second-leading scorer, left after falling on Vucevic’s foot on the first possession in overtime.

The Magic hit 6 of 10 shots in overtime, five of them layups against a tired and ineffective defense.