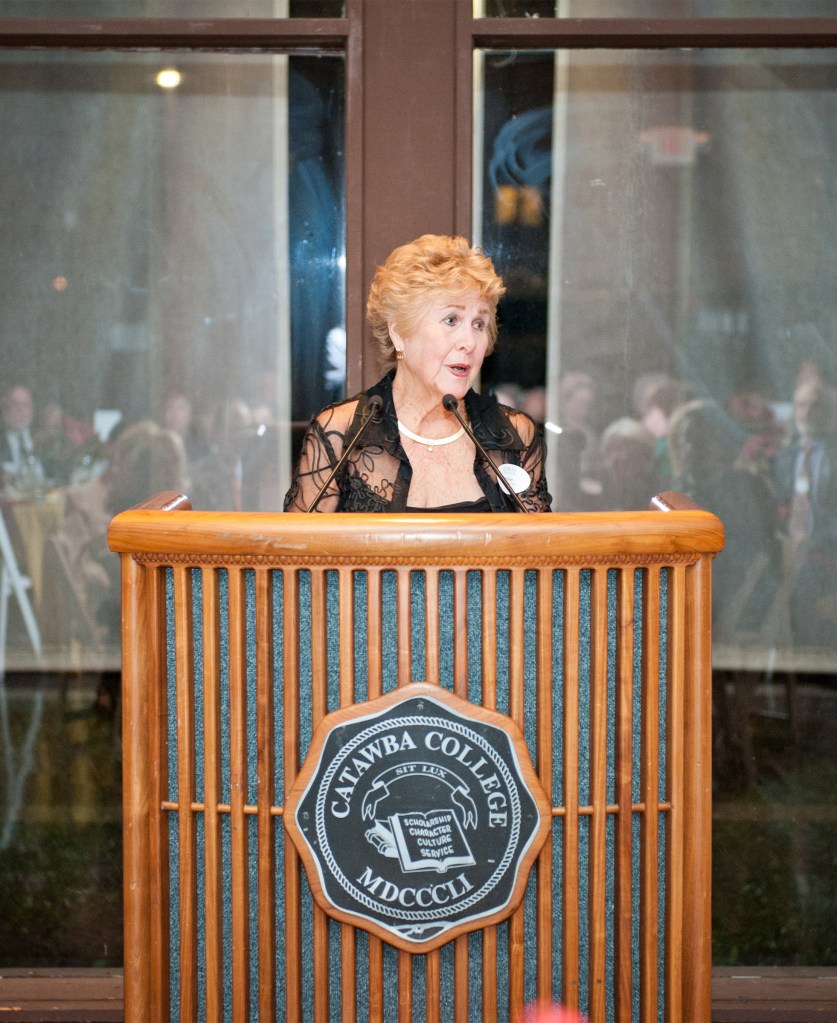 SALISBURY — Catawba College alumna and trustee Darlene Landis Ball of Salisbury was honored by her alma mater as the 2017 recipient of the college’s Adrian L. Shuford Jr. Award for Distinguished Service.

Ball, who recently stepped down as chairwoman of Catawba’s board of trustees, was presented the award by college President Brien Lewis during an 1851 Society celebration for the institution’s major donors. The event was held in Peeler Crystal Lounge of the Robertson College-Community Center on campus.

Lewis said college administrators and Ball’s peers on the board of trustees placed “value on her opinions and sage advice and look to her for counsel, knowing that she shares it with a great love for this institution.”

Ball, Lewis said, came south to Catawba from her home in Maryland with the words from her father that, “You can be anything you choose to be.” Ball took her dad’s advice to heart, majoring in biology and chemistry and becoming a self-described geek, but “a geek who got things done.” She was SGA president, a May Day Court attendant and the female recipient in her graduating class of the Whitener Award.

Ball also found love during her undergraduate tenure at Catawba. She ended up marrying the college quarterback, Ron Ball, a student athlete from West Virginia. The two were married for 46 years until his death in 2009 and had two children, daughter Kristin and son Vaden. Today she is grandmother of two.

Ball enjoyed a successful career, working first at Dan River Mills in its research division. She went to work for Burlington Industries in 1964 and held 11 different positions of responsibility, concluding corporate vice president of e-business development in 2001. From 2008 until now, she has been a partner in Seating Safety Solutions, a business that her husband co-founded.

At Catawba, she was recognized in 1976 as the recipient of the Distinguished Alumna Award. In 2009, she was inducted into the Ketner School of Business Hall of Fame. She has been a perennial member of the Chiefs Club and has served on the Alumni Association board, including a term as president.

She was tapped for the board of trustees in 1999 and served as chairwoman between 2012 and 2017. Ball has also consistently supported projects and campaigns at the college, including taking a lead role in moving her class of 1962’s endowed scholarship to the McCorkle’s Scholarship level.

Outside Catawba, she has been an active participant in many Habitat for Humanity builds in Greensboro and Salisbury. She is also a supporter of Rowan Helping Ministries.

Named in honor of the late Adrian L. Shuford Jr. of Conover, a businessman and a long-serving member of the college board of trustees, the award is presented annually to individuals whose actions and generosity to both the college and their communities emulate those of Shuford.

Originally named the President’s Award for Distinguished Service and first presented in 1983, the award was renamed to honor Shuford in 1984 for his service to Catawba.