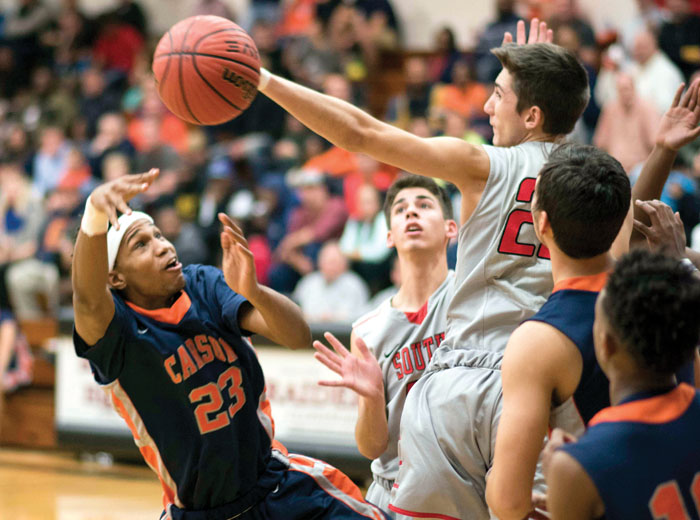 LANDIS —It’s a little too soon to take Carson’s temperature, but things are heating up in China Grove.

“We’re winning some games, but mostly we’re trying to get better every night,” coach Brian Perry said. “South Rowan is much improved and was playing without their point guard, which definitely hurt them. That allowed us to get some steals and make that little run in the second quarter.”

South (2-2) was minus the services of senior Dillon Kluttz, who missed his second straight game with an illness. Without him the Raiders fell behind early in the second period and never recovered.

“They came out with a lot of energy, like they wanted to prove something,” said Carson guard Jailen Williams. “We were able to hold them down.”

Williams topped all scorers with a season-high 24 points, including 20 in the first half. It was still a tight game when South’s Brendan Finger hit a 15-foot jump shot to give the Raiders a 15-14 lead just 40 seconds into the second quarter. Carson responded with eight straight points and an 11-2 run, surging ahead 25-17 when Cole Perry knocked down a 3-pointer. By the time Williams made a well-timed steal and drove for a layup with 1:08 remaining in the half, Carson had taken a commanding 17-point lead.

“He was just trying to get to the line,” South’s Bailey Graham said after Williams netted 13 second-period points. “He’d drive and kick or drive and get fouled every time. He’s just a good player.”

Coach Perry explained that Carson wasn’t playing its best in first quarter and early part of the second.

“We weren’t hitting shots early and defensively we had a couple of breakdowns,” he said. “But I didn’t think we were just going to go in and blow them out. They’re too good for that. We had to grind through that first quarter before we hit a little spurt that gave us some separation.”

South hung around without make any headway in the third period. Carson’s Jamarius Hairston flexed some muscle and scored on a three-point play before Williams drove the left side for a scoop layup that made it 54-35 midway through the quarter.

“When I’m getting my shot, I’m always going to take it,” Williams said. “But when it’s not there, I’ll kick it out and try to get one of my teammates and open shot.”

Hairston finished with 13 points, the last two on a crossover dribble-drive layup that provided a 20-point lead in the final stanza. Carson led by as much as 70-46 when speedster Cameron Prugh scored on a fastbreak layup with 4:20 to play.

“We’re happy with the win, but not satisfied with the way we played defense,” Hairston said. “We weren’t being vocal, weren’t moving when the ball was being passed. But we had a good second quarter. That’s when we changed the tempo of the game by pressuring them and forcing turnovers.”

Perry, a wispy, 6-foot-2 junior, scored a season-best 14 points for Carson — all but two of them in the first half. Big man Zach Powers led South with 12 points while high-energy reserve Jordan Oglesby contributed 11 off the bench.

“Losses like this we just try to forget the same night,” said Graham. “We’re already ready for Friday.”

NOTES: Carson is 5-0 for the first time since 2009. … The Cougars placed 10 players in the scoring column and South had eight. … Both teams play road games on Friday. South takes a 1-1 CCC record to West Davidson for a conference match. Carson visits A.L. Brown.