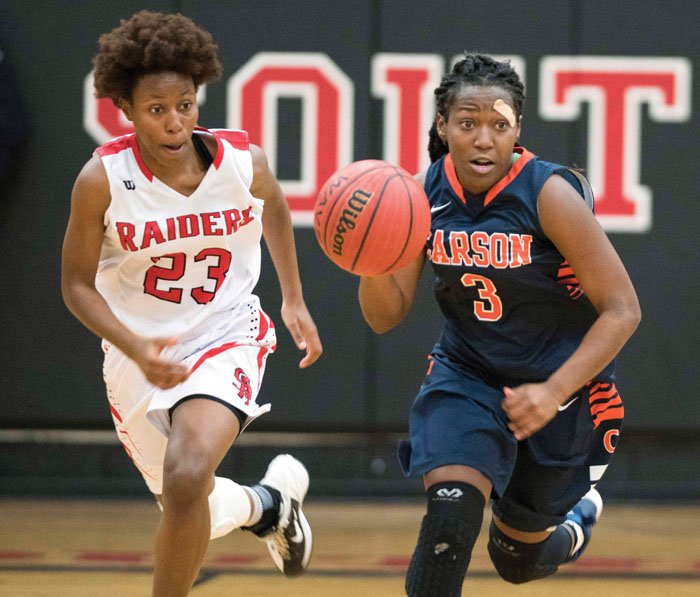 The Cougars squandered nearly all of a 16-point halftime lead before clamping down on a 49-41 non-conference win at South Rowan.

“It was tighter than we wanted it to be,” winning coach Brooke Stouder said, after Carson (5-1) held on. “We expected a tough game and nothing came easy. Give them the credit for that. South played a really good second half.”

If only the Raiders (1-3) had played better in the first half. Carson converted six three-point shots in the first two periods and led 25-8 when Olivia Gabriel knocked down her second in a row with 2:34 left in the half. She finished with 20 points.

“We gave up in the first half,” said South coach John Davis. “We tried to make passes we knew we shouldn’t make — and that led to tons of turnovers.

The Raiders worked their way back into the game in the third quarter and pulled within 38-31 when junior Janiya Downs banked in a 3-pointer from the left side as the buzzer sounded. “They definitely had all the momentum going into the fourth quarter,” Stouder said. “You could just feel it.”

In the fourth, Downs was held scoreless but teammate Riley Corriher’s 3-ball inched South within 38-35 with 4:55 to play. Carson held a five-point edge when junior forward McKenzie Gadson suffered a right ankle injury, forcing the Cougars to play the final 2:31 without her. She left the locker room with an ice pack taped to her leg.

The knockout blow was delivered with 1:24 to go. Carson’s Maren Shumaker struggled to find Gabriel on an inbounds pass from the baseline behind the South basket. After two attempts were swatted away, she unleashed a 60-foot pass to freshman teammate Lani Isley, who glided in for an uncontested layup and a 46-39 Carson lead.

“They set a screen trying to get Gabriel open,” said Davis. “But we took that away so the girl made a long pass.”

Stouder offered more insight. “Sure, we wanted the ball in Olivia’s hands,” she said. “Everyone in the gym knew that. But the play that happened was the play we were in. It’s the easy release play.”

Downs had 14 points to lead the Raiders. Gadson, who was injured after penetrating the lane and missing a layup, had 13.