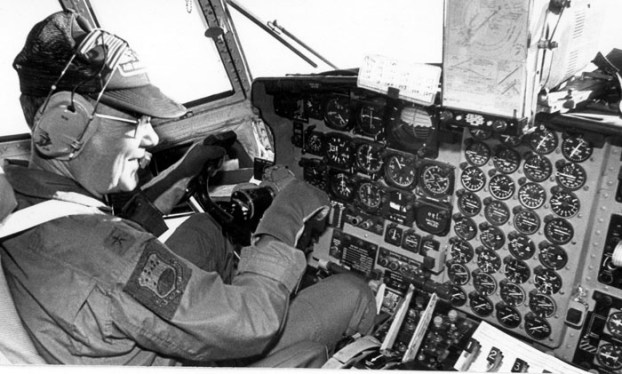 SALISBURY — I’ve been wracking my brain to figure out the last time I saw Harold Earnhardt. I still feel the handshake and see the friendly smile, but where were we?

Was it a fundraiser? Some kind of government meeting? The funeral of a mutual friend?

No matter the place, I shouldn’t have been in such a hurry. I should have stayed and caught up with him. I didn’t know it was the last time we’d see each other.

Earnhardt, 85, died Sunday at the Glenn A. Kiser Hospice House, which I guess was fitting. Earnhardt ardently supported the hospice mission, served on the local advisory committee and leaned on home hospice care five years ago for his wife, Helen.

It’s comforting to know hospice was there for him, too.

This will seem strange, but I will always associate Harold Earnhardt with Panama. Back in 1981, when I was a whippersnapper of a reporter with longish hair and a cocky attitude, I flew to Panama in a C-130 with Earnhardt and his fellow Air National Guard officers and crew.

At the time, Earnhardt was a colonel and commander of the 145th Tactical Airlift Group, which was the Charlotte unit of the Air National Guard. He piloted our C-130.

The 145th TAG’s commitment was for four weeks, providing theater airlift support for the Southern Command. In the days to come — he would be gone for a week — Earnhardt knew he would be flying C-130s and transporting cargo and personnel into Peru and Argentina.

But he and the other Charlotte Guardsmen had some down time in Panama, and they graciously allowed photographer James Barringer, ad man Don Stiller and me to tag along for a couple of days.

With Earnhardt’s help, I learned how the C-130 rotation of planes flying into Howard Air Force Base in Panama allowed a part-time military, of which the N.C. Air National Guard was a part, to provide the total airlift requirements for all of South America.

As Capt. Preston Linn told me at the time, “Instead of having someone sitting around on active duty all the time, we do it.”

Before we had to fly back home (without Earnhardt as our pilot this time), we visited the Miraflores Locks — the first locks a ship meets if it’s passing through the Panama Canal from the Pacific to Atlantic oceans.

I learned then, because of the way Panama is contorted, that this was probably the only place where the sun can seem to set in the Atlantic and rise in the Pacific.

That same night, we had drinks and dined on prime rib at the officers club.

The next day we took a train trip to Colon, a city on the Atlantic side of Panama. We later had dinner at a seafood restaurant in Panama City and paid a visit to a casino in the Holiday Inn. As I reported later, Earnhardt kept rejecting Linn’s advice on how to play his blackjack hands and ended up clearing about $36.

The reports of those winnings apparently had grown to $3,600 by the time some of his fellow officers had returned to Charlotte before him, Earnhardt told me later.

The men on that trip included Gen. Jerry Cochrane of Lincolnton, Lt. Col. Jim Melvin of Gastonia, Lt. Col. Bill Holtzman of  Lexington, flight engineer T.G. Lathan, Lt. Col. Bill Lackey of Statesville and Linn, a captain who was originally from Landis and then living in Chapel Hill.

Everywhere those guys went in their travels around Howard Air Force Base and Albrook Air Force Station in Panama, they were greeted with salutes and afforded all the military courtesies and accommodations full-time officers would receive.

It made me feel pretty important just being with them.

Away from the Guard, Earnhardt was part of the family business, Earnhardt Lumber and Trucking in eastern Rowan County.

By the time we made that trip to Panama, the Duke University graduate and Air Force veteran had been in the Air National Guard since 1960, when he started out as a first lieutenant. He was certified to fly 12 different aircraft.

“I never expected to do anything but fly,” Earnhardt told me once. “What I’ve gotten above that is gravy.”

From a newspaper reporter’s point of view, Earnhardt already was a big deal in 1981. He had close to 6,000 flying hours under his belt. He had flown combat missions in Vietnam. His missions with the Air National Guard had taken him all over the world, to places such as Western Europe, Africa, Turkey, Canada, Greece and Bermuda.

But what he especially liked about the Guard, other than the chance to fly great aircraft, was the ability to return regularly to his small-town life in Rowan County.

“One day you’d be here, the next day, Alaska,” he said. “When I got in the Guard, I got to fly and I got to live in Rockwell. I got to see a lot of places I’d never see.”

You probably know a lot about the rest of Earnhardt’s story. By January of 1983, he was named commander of the N.C. Air National Guard, replacing his friend Cochrane.

Earnhardt soon was promoted to brigadier general, the rank at which he would retire from the Guard in 1988. By then he was serving on the town board in Rockwell, and a lot of people were calling him ‘The General.”

He would be Rockwell’s mayor for 10 years, and even when he wasn’t on the official ballot in 1995, Rockwell residents voted him into office anyway with a write-in campaign.

Through the years, I ran into Earnhardt often as I covered various functions. I don’t know how to say this any other way than to tell you Earnhardt was one of the friendliest, nicest, most good-natured men you could know — at least to this whippersnapper.

He seemed happy, and I could tell ‘The General” was enjoying a life full of family, church, Duke University victories and golf. We always laughed about how we should make another trip to Panama.

I still feel that last handshake. I still see that last smile.

New era takes root in Granite Quarry with swearing in of Cress, Linker

GRANITE QUARRY — Things got off to a rocky start Monday night for a new Granite Quarry Board of Aldermen... read more