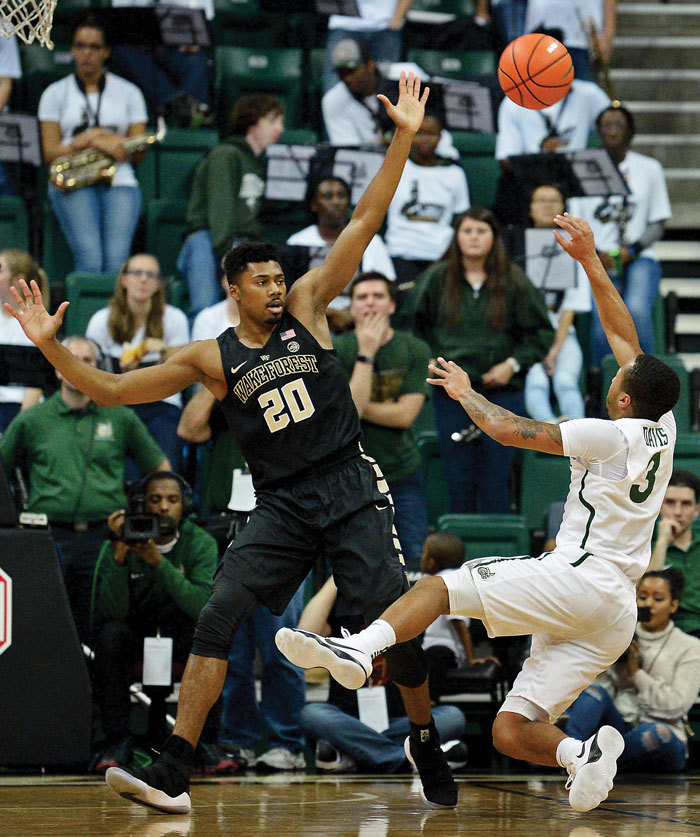 But Tuesday’s 80-57 win over the Charlotte 49ers improved the Deacons to 5-4 on the season and made that slow start seem like a distant memory.

“It’s been awhile ago,” said junior guard Keyshawn Woods, who had 15 points in his first game at Charlotte’s Halton Arena since he transferred away in 2015. “We’re making progress as a team and we’re getting closer to where we need to be.”

Woods, who volunteered to leave the starting lineup after the 0-3 start, provided another spark off the bench on Tuesday as he helped fuel a 20-1 surge in the middle of the first half that turned a close game into a blowout victory.

“I thought the game today got off to a really good start offensively,” Wake Forest coach Danny Manning said. “We moved the ball and got good shots.”

The Deacons hit nine 3-pointers in a first half that saw that surge turn a 20-16 lead into a 40-17 advantage with 3:53 left before halftime.

The Deacons game-breaking surge came after the 49ers had closed within 20-16 with 12:53 left in the opening half on Jon Davis’ steal and driving slam dunk.

Wake Forest then scored on nine of its next 14 possessions in a 20-1 surge that included two Woods’ slam dunks.

Charlotte (3-5) never got closer than 19 points the rest of the way.

Wake Forest, which had opened the season with home losses to Georgia Southern and Liberty in addition to a tournament loss to Drake in Lynchburg, Virginia, pushed the lead to as many as 33 points at 69-36 with 11:32 to play.

Charlotte was led by Davis’ 14 points.

The 49ers struggled mightily on offense, hitting 32 percent (15 of 47) of their field goals and committing 20 turnovers.

“Against a team like this, you’ve got to make shots and you can’t turn the ball over,” Charlotte coach Mark Price said.

Price said his postgame message to his team was quite simple: “I just said, ‘You’ve got to go back to work.’ There’s not much to say. It’s disappointing.”

“This is not the Charlotte team that we saw on tape,” Manning said. “Some nights are like that.”

The game was Wake Forest’s first-ever at Charlotte’s on-campus Halton Arena after having played the 49ers at two other Charlotte venues — Bojangles’ Coliseum and Spectrum Center.

Wake Forest: After starting 0-3, the Deacons have now won five of six games as they gets closer to the start of the ACC’s first-ever 18-game league schedule that starts for the Deacons on Dec. 30 at North Carolina.

Wake Forest’s season-opening loss was its first since Jeff Bzdelik’s first year as coach in 2011 when the Deacons finished 8-24 overall and 1-15 in ACC play. The Deacons’ 0-3 start was their first since 1968 when they finished 5-21 overall and 3-11 in the ACC.

Charlotte, which is located in the geographic center of the ACC, always looks forward to meetings against those teams. But Tuesday’s loss dropped the 49ers to 7-38 all-time against ACC members, with their last win coming against Clemson in December 2008.

Wake Forest: The Deacons host Army on Friday at 4 p.m. Wake Forest then visits Coastal Carolina on Dec. 18 and hosts Tennessee on Dec. 23 before their Dec. 30 ACC opener.

Charlotte: The 49ers hit the road to play at Chattanooga on Sunday, the start of a month-plus road stretch before returning home on Jan. 11.