Taggart leaving Oregon to be next Florida State coach 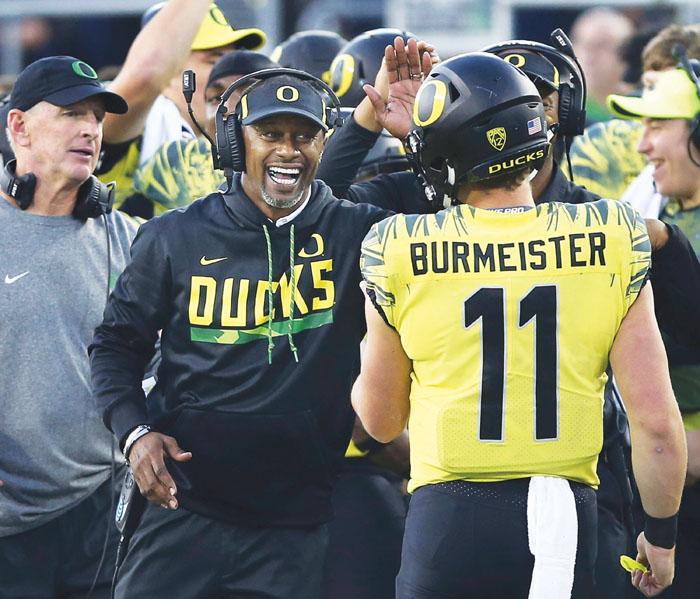 TALLAHASSEE, Fla. (AP) — Willie Taggart is returning to the Sunshine State, this time as head football coach at Florida State.

Taggart has agreed to become Florida State’s next coach, replacing Jimbo Fisher. Taggart told his Oregon players during a team meeting on Tuesday that he is leaving.

Florida State has called a news conference for Wednesday morning to introduce Taggart.

The 41-year old Bradenton native coached at South Florida for four seasons before going to Oregon. Fisher resigned Friday to accept the opening at Texas A&M .

Taggart has a 47-50 career record, including 7-5 this season, but is known as a rebuilder. He arrived in Eugene after four years at South Florida, where he guided the Bulls from a 2-10 record his first year to a 10-2 mark last year and a spot in the Birmingham Bowl.

Before that he spent three seasons as head coach at his alma mater, Western Kentucky, inheriting a winless program that he turned around with back-to-back winning seasons.

Taggart, and Odell Haggins — Fisher’s replacement on an interim basis — are the first black head football coaches at Florida State. Haggins will hold the position for two games before turning over the reins to Taggart.

Haggins led the Seminoles (6-6) to a 42-10 win over Louisiana-Monroe in Saturday’s regular-season finale. He will coach the Seminoles in the Dec. 27 Independence Bowl against Southern Mississippi.

This was the first time Florida State had to conduct a coaching search since 1975.

Bobby Bowden was the Seminoles’ coach for 34 seasons and put the program on the map with two national championships. Fisher was hired as offensive coordinator in 2007 and was also named as the head-coach-in-waiting. He took over in 2010 following Bowden’s retirement.

When Taggart was hired by Oregon , he said he had three basic tenets: “Make no excuses, blame no one, do something.” ‘Do Something” became his tagline for his first season with the Ducks.

Oregon started this past season 4-1 and even briefly popped into the AP rankings, but starting quarterback Justin Herbert broke his collarbone and the Ducks floundered, going 1-4 without him.

Herbert returned for the final two games of the season, both wins that got the Ducks into a bowl game in Taggart’s lone season. Co-offensive coordinator and offensive line coach Mario Cristobal will be the interim head coach when Oregon faces Boise State in the Las Vegas Bowl on Dec. 16.

Taggart will be tasked with restoring a Florida State program that has failed to live up to expectations the last two seasons.

Taggart’s contract with Oregon was for $16 million over five years that includes a $3 million buyout if he left before Jan. 31, 2018. He was offered a four year, $20 million extension a week ago when it appeared that the Florida State job would be open.

His first job at Florida State will be salvaging a recruiting class that saw six prospects over the past week announce that they were reopening their searches of where to attend college.