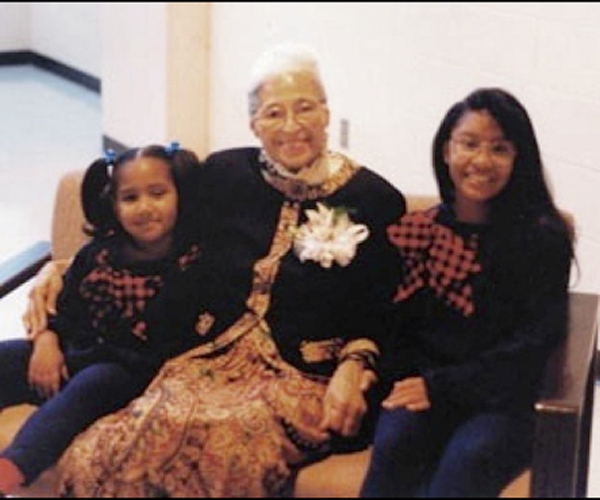 Simone Martin and her sister Summer pose with Rosa Parks in 1997. Submitted photo

It’s meaningless because Trump obviously has no real idea what Parks did or what it meant. If he did, he could never have cursed Colin Kaepernick.

Oh, sure, he can mouth the words, as he did in the slick video posted online Saturday. To the accompaniment of swelling music and historical images, Trump narrated Parks’ famous act of defiance 62 Decembers ago, her refusal to give up her seat on a Montgomery, Ala. bus to a white man after the “white” section of the bus became full.

Her arrest ignited the 381-day Montgomery Bus Boycott, the first act of the Civil Rights Movement, and brought to prominence a 26-year-old preacher named Martin Luther King, Jr. And yes, Trump spoke truly when he lauded Parks for bravery and a legacy that inspires. But given the source, that praise could not have been emptier.

You cannot truly understand Parks’ legacy or appreciate her bravery and still declare, as he did in September, that NFL owners should say “Get that son of a b—-h off the field” if a player follows Kaepernick’s lead and kneels during the National Anthem. This is not to equate the athlete and the seamstress; her impact obviously dwarfs his — at least, thus far. But it is to say that, in terms of motive, method and reaction, there is little substantive difference between the two.

It’s important to remember that it wasn’t just the indignity of being told to surrender her seat that made Parks say no that day. Rather, it was also decades of living with white people’s abuse, exploitation and violence under a system that assumed, as a matter of policy, that she was filthy, ignorant and unworthy. Which is not fundamentally different from Kaepernick’s frustration with police brutality that kills and wounds African Americans while the courts do nothing.

Yes, his protest is often called unpatriotic and offensive. The same was said of Parks’ protest. Not incidentally, she broke the law; he didn’t. And as Kaepernick is called names and threatened by outraged white people, so was she.

Parks once said she refused to stand because she was “tired of taking it.” The things that made her tired were in plain sight, as obvious as a “Whites Only” sign. Yet, they were invisible to most white people.

Sixty-two years later, we can all easily see the things that fatigued her and other black people back then. We marvel that there was ever a time some of us could not. And Parks, 12 years dead, is unthreatening enough to be “honored” by a Donald Trump.

Well, this is the same Trump who has led the metaphorical lynch mob against black athletes for doing essentially what Parks and her generation did. Moreover, he’s the same Trump who retweets white supremacists and Islamophobes, the one who found moral equivalence between neo-Nazis and those who protested them.

So this “honor” is cynical, hypocritical and deeply insulting to the memory of a great woman. Trump needs to take Rosa Parks’ name out of his lying mouth. He sullies it by speaking it.

Meantime, that football player Trump loathes risked his livelihood because he got tired of “taking” the brutalization of black people. He has faced condemnation and threat for demanding that all of us see what some of us refuse to. Like the seamstress on the bus six decades ago, Colin Kaepernick has ignited a generation because he decided he literally would not stand for it anymore.

He honors Rosa Parks more meaningfully than Donald Trump ever could.

D.G. Martin: How NC can learn from Alabama’s special election

What could we North Carolinians learn about ourselves when we sort out the results of the Dec. 12 Alabama special... read more