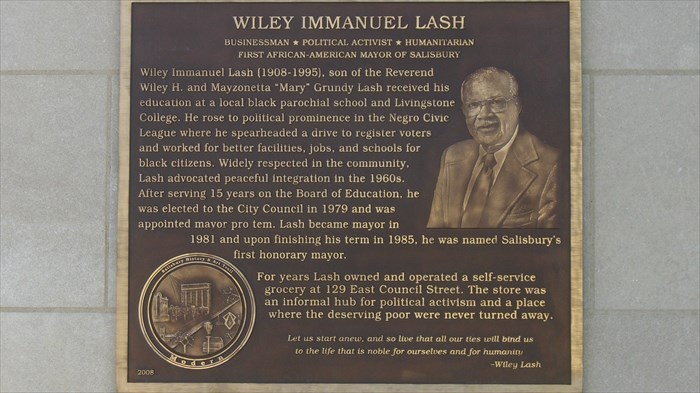 A plaque at the corner of North Main and Council streets honors Salisbury's first African-American mayor, Wiley I. Lash.

That was the inimitable Wiley I. Lash, a businessman and public servant to the core.

The owner of a successful business, Lash Self-Service Grocery at 129 E. Council St., Lash rose to political prominence in the Negro Civic League, a powerful organization in the community at the time. He advocated peaceful integration in the 1960s, spearheaded the Civic League’s  drive to register voters and worked for better facilities, jobs and schools for black citizens.

His daughter, Adrienne Jones, once said Lash taught her to drive so she could drive people to the polls.

Known more as a negotiator than a politician, Lash carried out his convictions in quiet ways.

In 1962, when movie theaters were still segregated, some 16 Livingstone College students were jailed for trying to sit in the white section of the Capitol movie theater in downtown Salisbury. About a week later, two prominent citizens picked up the protest, perhaps knowing they were unlikely to be arrested — Lash and Dr. Samuel Duncan, the president of Livingstone College. Lash and Duncan bought tickets, went into the “white” section, sat down and watched the movie. As the Salisbury Post later reported, they went back the next day and the next. “Reports at the time indicated that they broke the law daily for about a week, even though the movie changed only once.” Racial restrictions at the theater soon disappeared.

Lash served 15 years on the city school board before first running for City Council in 1979. He came in second behind Don Weinhold, who became mayor. Two years later, Lash led the field, and Council Member Jim Dunn nominated him for mayor, calling Lash “one of the most distinguished citizens in the history of this city. Not only is he a gentleman and a very fine man, but he has dedicated the last two decades of his life to service to the city.” Lash served as mayor from December 1981 to December 1985.

Even then he was not finished with city government, or vice versa. The council asked Lash to fill in temporarily while the city was between city managers, and he may be the only person ever named Salisbury’s “honorary mayor.”

Lash died in 1995 at the age of 86. A plaque honoring him can be found at the corner of North Main and Council streets, where City Hall was located during Lash’s tenure. The inscription ends with a quote from the honorary mayor:

“Let us start anew, and so live that all our ties will bind us to the life that is noble for ourselves and for humanity.”