D.G. Martin: How NC can learn from Alabama’s special election 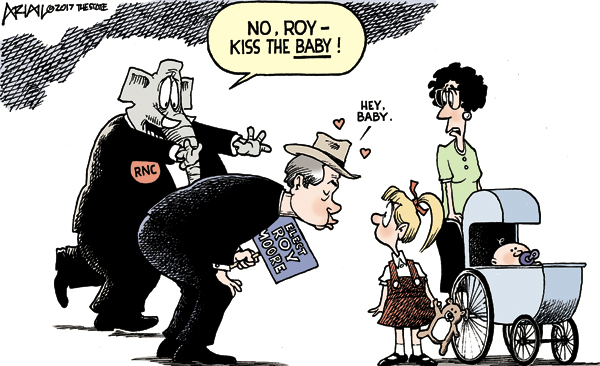 What could we North Carolinians learn about ourselves when we sort out the results of the Dec. 12 Alabama special U.S. Senate election?

Nothing, you say. We are not like Alabama. They are Deep South. We are mid-South. They are mired in their George Wallace “stuck in the mud” tradition while we North Carolinians have thrived in our Terry Sanford “New South” progressive tradition.

Remember when those traditions clashed in 1972? Wallace and Sanford faced each other in the Democratic presidential primary in North Carolina. Wallace beat Sanford by more than 100,000 votes, effectively ending Sanford’s presidential bid.

But you say that was a long time ago.

It was, but if given the same choice even today, many of today’s North Carolinians would choose Wallace over Sanford.

And, today, if they had the opportunity, they would join their brothers and sisters in Alabama and vote for the Wallace clone, Republican Roy Moore, rather than Democrat Doug Jones, the Sanford stand-in.

Almost certainly, Alabama has a greater percentage of people in the Moore-Wallace camp than North Carolina has. But the significant presence of such voters presents a formidable challenge to Democratic candidates in both states.

First, inspire, mobilize, and get to the polls hard-core Democrats, including liberals, African Americans, pro-choice advocates, those concerned for the poor and downtrodden, and the poor and downtrodden themselves. If they go to the polls, they would be reliable Democratic voters, all. But to get them there requires well-organized registration and election-day efforts.

Be prepared to cut off or minimize diversions from this core support group. In 1972, third party candidate U.S. Representative Shirley Chisholm, an African-American from Brooklyn, garnered about 60,000 votes. Almost all of them would have gone to Sanford if Chisholm had not been in the race.

In Alabama, people disgusted with Moore need a message that makes them angry enough to believe they have a public duty to vote against him.

Being angry might not be enough to motivate some of these people. In addition to the anger with a Moore-Wallace type of candidate, some will demand a positive message to show how the alternative is really going to make a difference.

Secondly, find ways to discourage people who would vote for a Wallace-Moore candidate from going to the polls. Dampen their enthusiasm with constant reminders of the Republican candidate’s sins and inconsistencies. Roy Moore’s alleged misconduct seemed to present a God-given opportunity to discourage more voters from voting for him. But Alabama Democrats’ difficulty in exploiting Moore’s weaknesses shows that this task is not always easy.

Thirdly, find an appeal to conservative and moderate voters who generally vote Republican, but are concerned about what the election of a candidate like Roy Moore would do to their state. These potential supporters need assurances that their vote for a Democrat will not elect someone who is going to push a far-left agenda. The trick is to accomplish this objective without pulling the rug out from under the core Democrats whose enthusiasm, election-day work, and votes are critical.

If the Doug Jones campaign finds a way to win by mobilizing the Democratic base, discouraging Moore supporters from voting, and finding ways to appeal to moderates and conservatives who usually vote Republican, North Carolina Democrats will have a model to follow in the 2018 and 2020 elections.

D.G. Martin hosts “North Carolina Bookwatch,” which airs Sundays at noon and Thursdays at 5 p.m. on UNC-TV. Today’s guest is Tim Tyson, author of “The Blood of Emmett Till,” which was just named one of The New York Times 100 Notable Books of 2017.