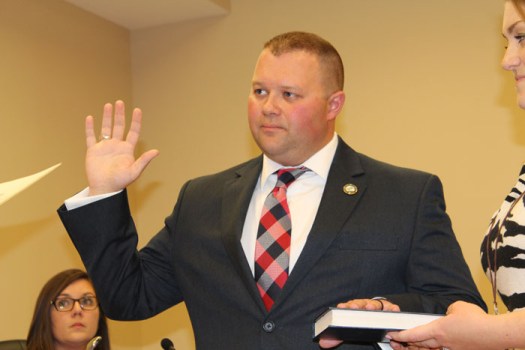 Brian Linn is sworn in as a member of the China Grove Town Council on Tuesday night. Andie Foley/Salisbury Post 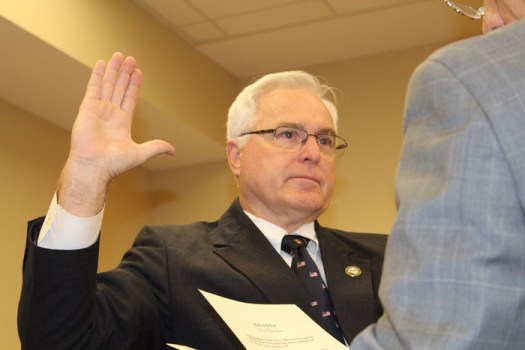 Charles Seaford was sworn into another term on Dec. 7 as a member of the China Grove Town Council. Andie Foley/Salisbury Post

CHINA GROVE – One new town councilman and two incumbents were sworn in for terms on the China Grove Town Council on Tuesday night.

Brandon Linn and Charles Seaford were both re-elected in the Nov. 7 municipal election. This will be the third four-year term for both men.

Arthur Heggins is the council’s newest addition, taking the place of Mike Upright, who had served two four-year terms.

Heggins is the first African-American to run for elected office in China Grove.

“I want to … thank the citizens and especially my community for all the support that you’ve offered, even from this board in … thinking that I could possibly be an aid and help in this community,” Heggins said. ” … I hope to be an asset.”

“I’d just like to take this opportunity and thank the citizens of China Grove for my re-election,” Linn said. “It’s definitely an honor whenever the citizens come out and vote and they appoint you to hold an office for them and to be a voice for them.”

In other business at Tuesday’s meeting:

• Local veterans expressed disappointment with the removal and uncertain replacement of the town’s Vietnam War memorial.

The memorial was taken down from Main Street two years ago and has yet to be replaced. Gary Johnson of Landis spoke on behalf of local veterans.

“We understand that it wants to be put back up at the community center. That’s our main concern,” he said. “We feel like these fellows died in combat fighting for our rights … They deserve more than being on a back street.”

Mayor Lee Withers explained that the project was waylaid because of scheduling problems with local high school students, who were to rebuild the memorial as a service project.

“Their schedules have taken longer than we thought they would, so the time has come that we … (may) have to pay for something instead of letting them do it for free,” he said. “It was never about it being free, but it was about the experience of what they were going to do.”

Johnson said local veterans are willing to donate money to have the memorial replaced on Main Street, if funding is an issue.

“I was proud to be a resident of this town,” he said. “I’m not proud of the way you handled this Vietnam memorial.”

• Withers was appointed as the representative for the town Transportation Advisory Committee, with Linn as the alternate.

• Franklin Gover was appointed as the representative for the town Technical Coordination Committee, with David Ketner serving as alternate.

• Withers said that in 2018, the council will focus on economic development, with attention on identifying local properties and letting the council connect them with viable business developers.

“I think it’s a great idea,” he said. “I think we need to be more proactive in driving economic development. … Partnering with the Board of Trade is the right thing to do.”