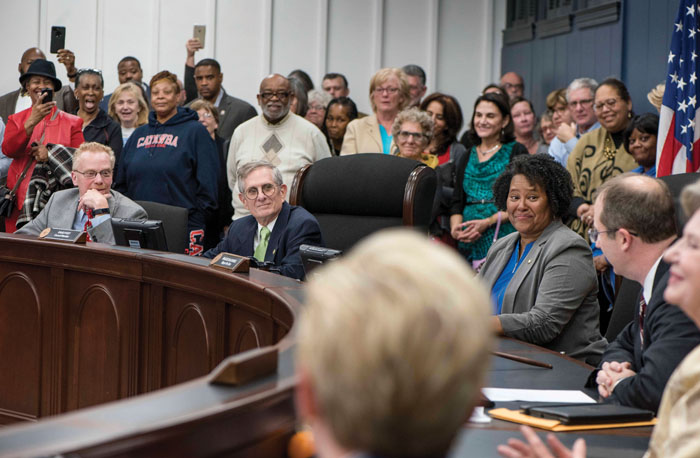 The meeting began as any other would have, with the previous council — Post, Maggie Blackwell, Karen Alexander, Brian Miller and Kenny Hardin — seated behind the dais.

The difference from most meetings was that the council chamber was filled with people — so many that numerous onlookers had to stand shoulder-to-shoulder in the corners of the room to see the proceedings.

Before the previous council adjourned to allow the new members to be sworn in, Blackwell and Hardin were given a moment to speak.

Hardin said that “regardless of how it appeared,” he appreciates his time on the council.

“Most of all, I appreciate the opportunity to have served with people who truly care about this city, about this community. I’m a better person for it, two years later,” Hardin said.

Blackwell referenced a time when her best friend encouraged her to build a park after she had told her that their neighborhood needed one.

“We did not post on Facebook, ‘We don’t have a park.’ We did not write a letter to the editor saying, ‘Why don’t we have a park?’ We scrapped it out and worked it on our own and then approached the city in a polite, positive manner,” Blackwell said. “And so my words to you citizens today is, there is no ‘they.’ It is all of us.”

Blackwell and Hardin were both given recognitions from the city for their service.

Once they had taken their seats, Miller said he had been selected as the temporary chairman — the person who would take nominations for mayor — because he had served on the council for the longest time.

Before Miller was able to ask for a vote, the audience erupted into applause and excited exclamations that lasted for nearly 30 seconds.

Miller then asked for other nominations and, when he heard none, asked the council members to vote. They voted unanimously for Heggins.

When Heggins took the oath of office, she asked her family to join her. She also asked Flora Calderon-Steck to translate the oath for the Spanish speakers in the audience.

“Welcome to the people’s meeting,” Heggins said after taking her seat. The audience responded with another round of applause.

She then asked for nominations for mayor pro tem. Alexander nominated Post, and the audience applauded.

When Post was sworn in, he used the Old Testament. His oath was also met with prolonged applause.

Each council member was then given a chance to speak.

Sheffield, who is the first openly gay Salisbury City Council member, said it is “an honor to be able to represent all citizens.”

“I am so excited about this team. And I hope that you all share with me that excitement,” Sheffield said.

When she thanked her wife of 27 years, Maryja Mee, for all her support, the crowd applauded.

Miller thanked the retiring council members and those who have supported his candidacy.

“To our new members, let me just say that I am also looking forward to our journey together,” Miller said. “…We have the tough challenges ahead of us. So, for what it’s worth, I’m looking forward to doing it together with all of us.”

Post congratulated Al on being elected mayor and said that it was a blessing to have four mayors in the same room at the same time. Former mayors Paul Woodson and Bill Stanback were in the audience.

He also thanked Blackwell, who he said really helped him through his first term on council.

Alexander said that she was excited to continue serving her community.

“And I’m especially excited about being in this seat this time,” she said, referring to her non-mayoral seat. “My family is also very, very excited because they’ll get to see me again.”

Heggins, who spoke last, stood up when she spoke because she said it was an honor to the people.

She said that, although the tradition of having only one black councilmember was not broken in this election cycle, several other traditions were.

“We have our first openly gay council member ever, who is not afraid to talk about loving her wife. We have seated our first Jewish mayor pro tem ever. And now me. I’m the first African-American woman to serve on this council and it just so happens I happened to get the most votes,” Heggins said.

Before adjourning, the new council approved the consent agenda, held a public-comment period, and tabled consideration of new board and commission appointments until its January meeting.