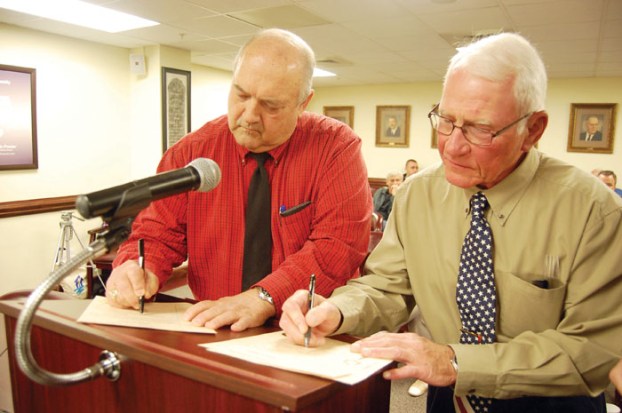 LANDIS — The faces of Landis’ Board of Aldermen changed at the board’s meeting Monday night.

Corriher and Brown won the two available seats in the Nov. 7 election. Brown got the most votes — 195 — and Corriher received the second-highest number of votes — 182.

Abernathy, who served one term on the board, received 137 votes. Roger Safrit, another former board member, received 149.

Before the new board was sworn in, Abernathy thanked Brown and Corriher for being willing to serve the community.

“Anytime an individual tells his community he’s willing to pledge four years of his life and service to his fellow man needs to be commended,” Abernathy said.

Abernathy listed all of the “opportunities and challenges” that the next board would have the chance to influence, including the restoration of north-south traffic on Central Avenue, the repaving of Main Street and the reshaping of Old Beatty Ford Road.

He offered some advice to the incoming board members: “… Read much, study much, listen much, learn much.”

Dennis Brown reiterated what Abernathy said and added that he had enjoyed “every minute” of his service to the town.

Mayor Mike Mahaley gave each outgoing board member a plaque and thanked them for their service.

Abernathy and Dennis Brown then stepped down from the dais and Judge James Randolph was invited to the podium to swear in Corriher and Bobby G. Brown.

After they were sworn in and had assumed the seats of their predecessors, Corriher nominated Tommy Garver for mayor pro tem, which had been Abernathy’s position.

The board voted unanimously to support Garver for the position.

Other items on the agenda included:

• Town Manager Reed Linn requested that City Hall be closed from noon to 2 p.m. Dec. 21 so that City Hall and Public Works Department staff members could have an annual lunch together.

Linn said that in years past, office staff members have had to answer phones during the lunch.

“So this year, I’d like for everybody to be able to get together at one time,” Linn said.

Isenhour said the new software, E-Crash, will be available on the Landis town website by Jan. 1.

New era takes root in Granite Quarry with swearing in of Cress, Linker

GRANITE QUARRY — Things got off to a rocky start Monday night for a new Granite Quarry Board of Aldermen... read more