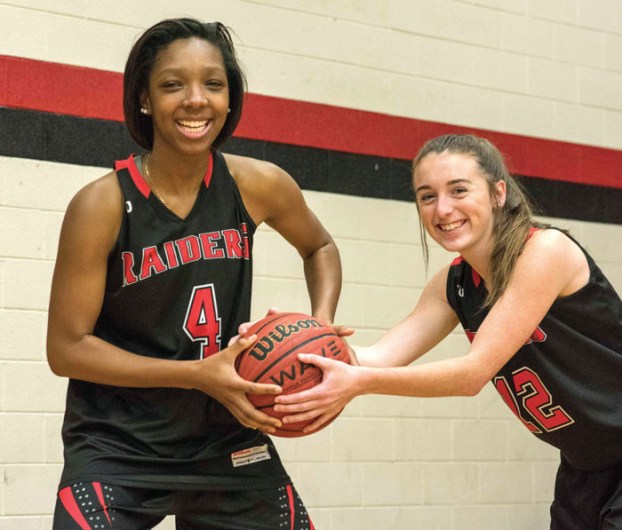 LANDIS — Inspirational players like Janiya Downs don’t come along all that often, so South Rowan’s girls program really wants to take advantage of her talent.

Good things should happen for South in Downs’ junior season because the Raiders are blessed with more than the rangy guard who is the reigning Rowan County Player of the Year. All five starters are back in red and black, plus two experienced reserves.

Davis said team chemistry is excellent. Downs, 5-foot-11, is well on her way to becoming the top scorer in program history, but she’s also a good passer, ball-handler, rebounder and shot-blocker. She’s personable and gets excited when her teammates experience success, and that’s important.

South’s girls are making a slight downward move as far as the level of competition, sliding from the 3A South Piedmont Conference to the 2A Central Carolina Conference.

The CCC boasts some fine girls basketball teams, notably Ledford, East Davidson and Salisbury. South is going to see teams that shoot better than anyone in the SPC did, but it’s unlikely South will encounter anyone as talented and physical as Hickory Ridge was or anyone as quick as Central Cabarrus was.

South concluded the 2015-16 season, when Downs was a freshman, by winning four of its last five games. South built on that strong finish and went 14-12 last season.

South was 0-6 against the SPC’s top trio — Hickory Ridge, Central Cabarrus and Carson — but managed to tie for fourth place and made the 3A state playoffs. South played some exciting games. The 86-83 overtime loss to West Rowan — Downs tossed in 38 in that one —  had to be seen to be believed.

Davis says Downs, who recently finished an all-county volleyball season, is better than she was as a sophomore, which is not great news for opponents.

“She’s jumping higher, she gets up there and slaps the backboard with both hands,” Davis said. “And her jumpshot is definitely improved. That’s where you’re going to see the biggest difference in her offensively.”

Downs averaged 20.8 points per game and scored in double figures in 25 of South’s 26 games. Carson held her to nine points last January.

Downs scored 31 on opening night this season and surpassed 1,000 career points in her second outing.

Senior guard Tazah Hardin was second team all-county in 2016-17 and turned in amazing performances. She basically averaged a double-double with 10.7 points and 9.9 rebounds per game.  She also led the county with 5.7 steals per game. Her ability to create steals allowed her to register three triple-doubles.

Hardin is exceptionally quick, seriously fast and jumps well.  Most of her points are going to come in transition. Her flaw is that she can be so aggressive she gets in foul trouble. She’s got to find the right balance because South needs her on the floor for 30 minutes.

“Hardin is really good at playing the passing lanes and really good attacking the basket,” Davis said. “She’s worked hard on her jump shot, and it’s gotten better. She should be a college player.”

Senior guard Riley Corriher averaged 8.5 points and 3.3 rebounds and was Honorable Mention on the all-county team. She has an unusual release, but she’s an accurate 3-point shooter. When Downs or Hardin penetrates and draws defenders, Corriher frequently has an open shot.

“She really worked in the off-season and she looks quicker,” Davis said. “A lot of our girls have put in a lot of time in the weight room, and she’s one of them.”

Whitley Arnott, a 6-foot, all-county softball pitcher, averaged 3.5 points and 7.2 rebounds as a varsity freshman. Her job is going to be to rebound and provide presence in the lane on defense.

“She’s worked on her ball-handling and her post moves,” Davis said. “She’s still just a baby as far as her age, but  she can be a big factor.”

Guard Jalee Rollins has been a varsity reserve the last two seasons and probably will be the first to jump off Davis’ bench. She knows the system and she can knock down an outside shot.

Madison McGuire, a good cross country runner and a sophomore with point guard skills, will be another important backup.

“She shoots well, and she’s not afraid to handle the ball,” Davis said.

The rest of South’s bench is new. Davis hopes to get scoring punch from juniors Chrishea Massey (returning from an injury) and Courtney Mullins and rebounding help from juniors Abigail Chabala and Jaleah Butler.

“We’ll play hard and we’ll see what happens,” Davis said. “We just have to take care of us. If we don’t beat ourselves, we’ll win our share of ballgames.”

Davis coached the South boys for 13 seasons (114 wins) before taking a few years off. He returned to the sideline to coach the South girls the same year Downs arrived at South.

The Raiders began this season by taking on East Davidson and Ledford, possibly the CCC’s two best. They got in foul trouble, didn’t move well defensively, and got off to a disappointing 0-2 start.

But don’t be overly alarmed by that. At the very least, the Raiders should enjoy another winning season.

Janiya Downs, 5-11, Jr. — On track to become the school’s all-time scoring leader as a senior. She also rebounds. She had 20 double-doubles last season.