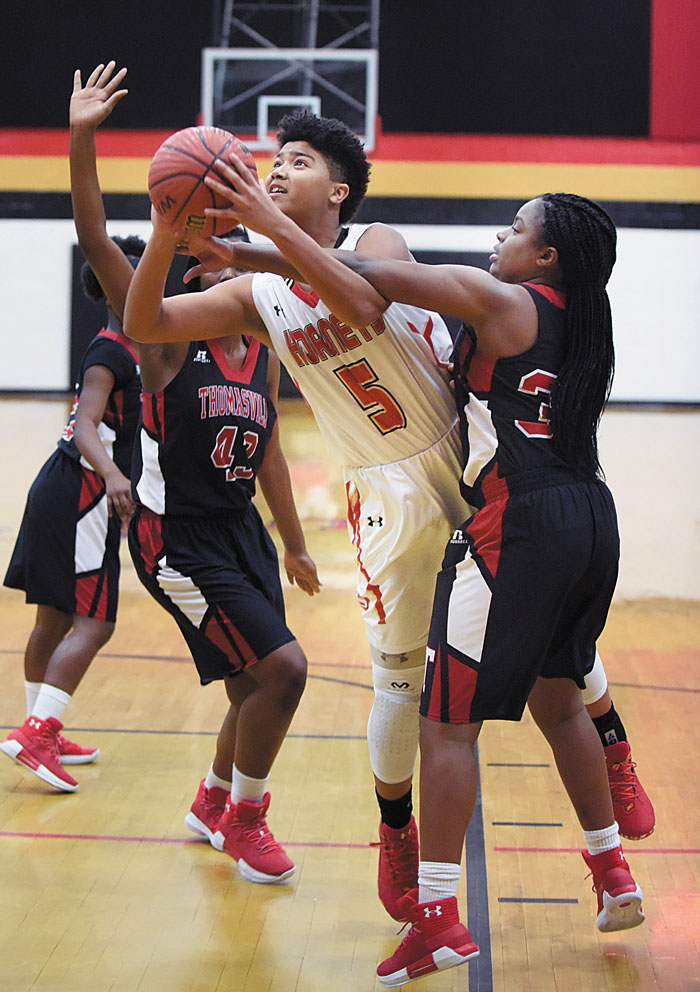 SALISBURY — It was such a crazy Tuesday night for Salisbury’s girls basketball team that their comeback started with an airball.

The Hornets trailed, 8-2, after five ugly minutes when a Maria Capito 3-point try fell short of the rim. Fortunately for Salisbury, the ball landed right in the hands of Bryanna Troutman, who knew what to do with it. Troutman’s stick-back put the Hornets on the road to a 60-44 Central Carolina Conference victory over visiting Central Davidson.

“In spurts, we played pretty well,” winning coach Lakai Brice said. “We rebounded the ball well, at times, and I thought we got the key stops when we needed them. At other times, though, we let them get to the basket way too easily and we didn’t do a good job offensively.”

Troutman, a talented, 6-foot-1 junior, had an extraordinary outing, a triple-double, accounting for 22 points, 15 rebounds and 10 steals. Sophomore point guard Anayia Fulson was superb as a floor-leader. She had 14 points and eight assists.

After struggling for three quarters, Capito broke loose in the fourth, scoring 11 straight Salisbury points in a little over a minute in a sizzling stretch that sealed victory. The senior guard finished with 17.

For Central Davidson (2-3, 1-3 CCC), Desara Hunt tossed in 18 with three 3-pointers and some nice mid-range stuff, while Mikayla Sink buried enough second-half free throws to get to 14 points.

Despite their woeful start, the Hornets went ahead for good with 1:30 left in the first quarter when Lexi May made a 3-pointer for an 11-10 lead. A Troutman 3-ball made it 16-10, and May beat the buzzer with a put-back for an 18-11 lead after a quarter.

Troutman scored seven in the second quarter. The Hornets took a 29-16 lead to the break.

The Hornets stumbled into another lull in the third quarter, jacking up misses from long range and forgetting about Troutman, who had an enormous advantage in every way against Central’s defenders.  With the Hornets’ lead down to 29-21, Brice had seen enough and got her point across during a timeout.

“I just asked them why were we settling for 3-point shots,” Brice said. “Let’s let Bryanna touch the ball.”

The Hornets showed more patience, Fulson got the ball to Troutman with an accurate lob, and Troutman scored easily with a short banker. Then Troutman made a steal and finished the play with a layup. Then a cutting Troutman accepted a nice feed from Fulson and scooped in two more. After Troutman’s personal, 6-0 run the Hornets led, 35-21. Central answered, but then Salisbury executed a textbook, inside-out halfcourt sequence. They got the ball inside to Troutman. She whipped it back out to a wide-open Capito, and Capito made the 3.

Fulson made the last key play of the night early in the fourth quarter. The Hornets had a 2-on-1 break, with Capito on the left side and Fulson whirling down the lane. Fulson could’ve flipped up a 5-foot shot, but instead she passed to her open teammate. That easy layup finally got Capito rolling, and Capito’s scoring binge finished off the Spartans.

“Anayia made that play and made a lot of key plays,” Brice said. “She made plays that helped her teammates, plays that let us keep momentum.”

Salisbury (4-0, 4-0 CCC) stayed unbeaten, but Brice is well aware tougher games are on the horizon. Games in which the Hornets are going to have play four good quarters to be successful.

“East Davidson and Ledford are next week,” Brice said. “That’s going to tell us a lot.”