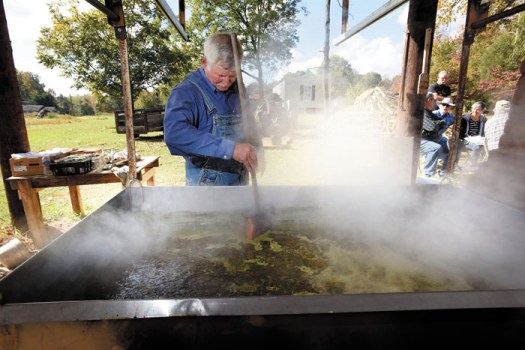 While the sorghum juice boils and steams, Donald Connor skims the waste impurities off the top of the juice. . photo by Wayne Hinshaw, for the Salisbury Post 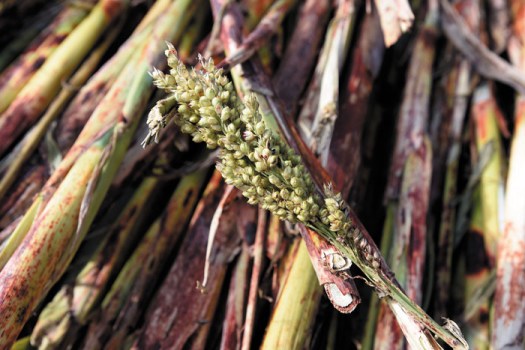 Each sorghum cane has seeds at the top that are not used in the molasses. photo by Wayne Hinshaw, for the Salisbury Post 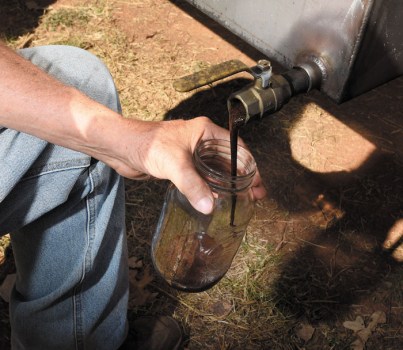 the finished sorghum molasses flows into the pint and quart glass jars. photo by Wayne Hinshaw, for the Salisbury Post 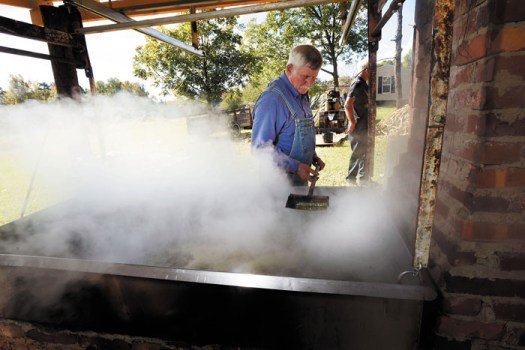 While the sorghum juice boils and steams away the water, Donald Connor skims the waste impurities off the top of the juice. . photo by Wayne Hinshaw, for the Salisbury Post 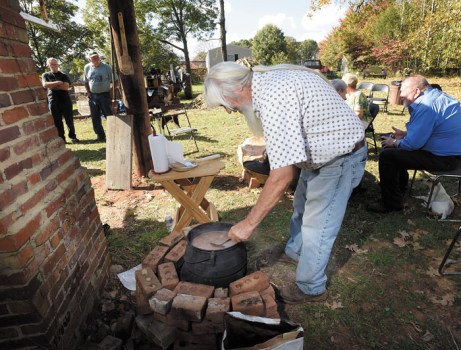 While the sorghum juice boils, Jerry Newby stirs the pinto beans and ham that is cooking over the wood fire that will be lunch for all the worker volunteers and neighbors. photo by Wayne Hinshaw, for the Salisbury Post 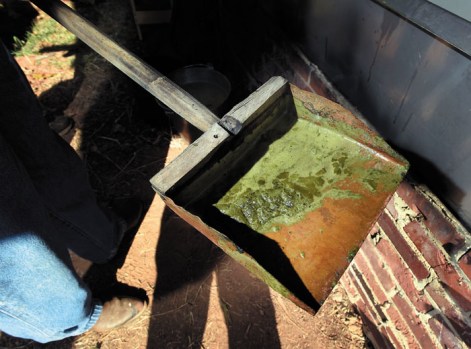 As the sorghum juice is boiled over the hot fire, you have to skim off the green residue impurities that floats to the top. It is part of the sorghum cane plant that will made the molasses bitter if you don't remove it. photo by Wayne Hinshaw, for the Salisbury Post 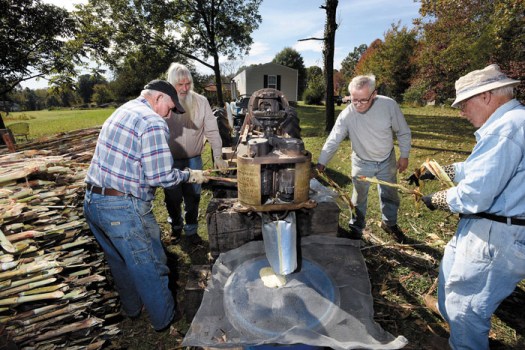 Donald Connor, Jerry Newby, Ronald Connor, and Wayne Fogleman running the cane mill. Coming out of the cane mill the sorghum cane is flatten out when the watery juice is taken out. photo by Wayne Hinshaw, for the Salisbury Post 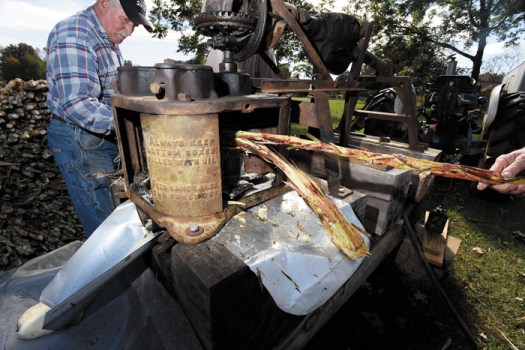 Coming out of the cane mill the sorghum cane is flattened out when the watery juice is extracted. photo by Wayne Hinshaw, for the Salisbury Post 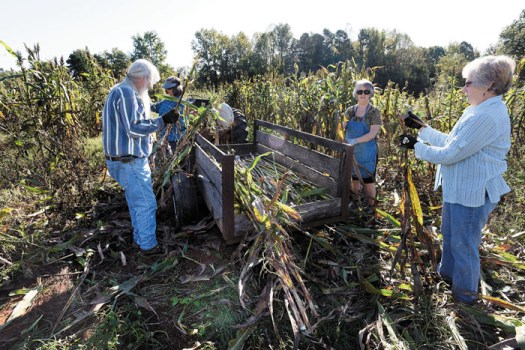 Jerry Newby, on the left, with family members and volunteers stripping the leaves off the cane and loading it into the wagon. photo by Wayne Hinshaw, for the Salisbury Post

Jerry Newbiy cutting sorghum cane with a machete. photo by Wayne Hinshaw, for the Salisbury Post 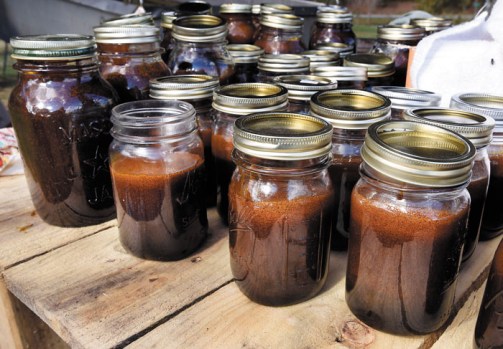 The finished sorghum molasses cools in the pint and quart glass jars. photo by Wayne Hinshaw, for the Salisbury Post 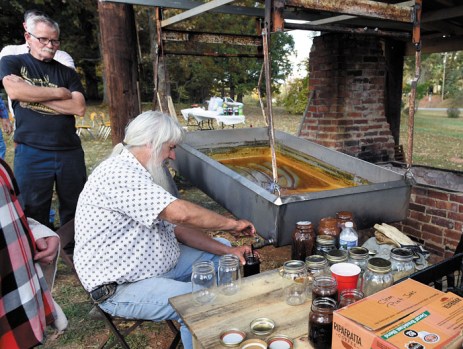 Jerry Newby drains the finished sorghum molasses into the pint and quart glass jars. photo by Wayne Hinshaw, for the Salisbury Post 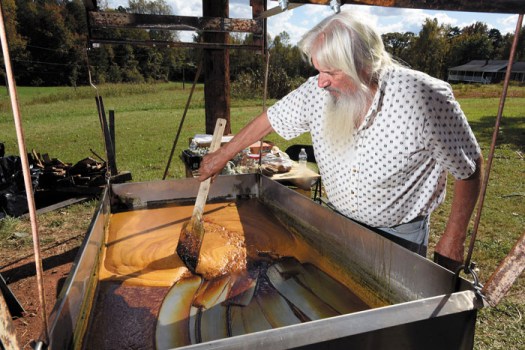 Jerry Newby pushes the thick sorghum syrup molasses to the bottom of the cook pan. photo by Wayne Hinshaw, for the Salisbury Post 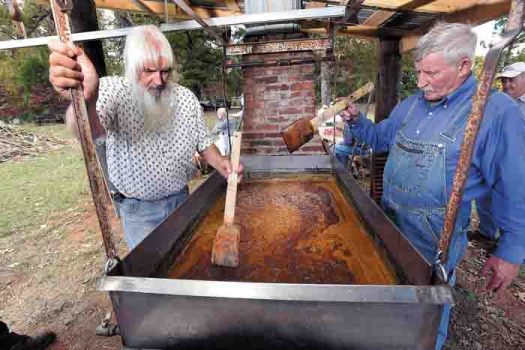 As the sorghum syrup finishes cooking and begins to cool and thicken Jerry Newby and Donald Connor keep stirring and testing the thickness of the syrup by watching it drip from a paddle. photo by Wayne Hinshaw, for the Salisbury Post

SOPHIA — Years ago, in the rural South, the clock would alarm in late October and early November to let the farmers know it was time to make molasses.

Summer crops were harvested and the weather, in most years, was dialing the temperatures  down. The maple trees were turning yellow or red. The fall tradition was to make molasses.

In the deep South where sugarcane grew, the molasses was called Blackstrap molasses and was a product made from sugarcane or sugar beets by boiling the juice for hours to remove the water

In the upper regions of the South like North Carolina, Tennessee, Georgia and West Virginia, sugarcane will not grow because of the climate.

Around 1853, the sorghum plant was introduced from Africa to the Southern states. It would grow in poor soils. Sorghum is considered a grass. Following the process of making blackstrap molasses, but using the sorghum plant juice, farmers could make sorghum syrup that was most often called sorghum molasses. It could be used as a sweetener for foods like baked apples, cakes, in coffee, baked beans and barbecue sauces or just on breakfast biscuits.

In Rowan County, the practice of making sorghum molasses has died out with the passing of the farmers who were skilled in the art or craft of cooking the sorghum juice.

In Randolph County, there are at least three households still making the molasses. One such farmer is Jerry Newby who lives in Sophia. Newby is a slender, tall man with flowing white hair over his shoulders and a equally flowing white beard covering his face. He says he grows the acre of sorghum “just for fun.” He has been growing it for fun for the past 15 years.

This year, because of the weather, he had to plant his sorghum three times to get a crop started back in May. Seeing all the labor that goes into the making of sorghum molasses, one would have to look hard to see the fun part of the job.

Newby, in the field on cutting day, swings a long machete, chopping the sorghum off near the ground and whacking off the seed pod at the top of the plant. Sorghum looks like a corn stalk without ears of corn.

While cutting, Newby explains, “It takes three trailer loads (of sorghum) to make a batch of molasses.” He has assembled volunteers, friends and family members to help with the intense labor of cutting the sorghum and stripping the leaves off the stalks.

The ladies working in the field with him strip the leaves while Newby cuts the stalks.

The women stripping leaves says with a chuckle, “We are the sorghum strippers.”

While avoiding fire ant hills in the field, Newby’s sister, Louise, one of the strippers, stopped to try to pull up a very healthy, robust-looking weed. She announced that she couldn’t pull the weed out of the ground. Newby answered without even looking up from his machete cutting, “No need to pull up weeds. One weed won’t make that much difference.”

The next day, after cutting the sorghum and a night’s rest, the sorghum crew gathered to start the juicing process. All stalks of cane must be fed, one stalk at a time, into the 130-year-old cane mill to crush the juice from the cane. The mill is run by a tractor that has been geared to the mill. Newby describes how the mill used to be turned by mules or horses walking in a circle turning the mill crushing cane.

Sixty-eight-year-old twins Ronald and Donald Connor joined Newby in feeding the cane into the mill. Talk continued among the workers. Newby said the the sorghum grows best in red clay soil. The taste of the molasses depends on the soil where it grows.

“When I planted, it wouldn’t come up this year. It came a packing rain after I planted it one time. Everybody’s cane didn’t do good this year. Too dry, wasn’t any rain on it. It is shorter this year than usual.” Sorghum can grow 12 feet tall but most of Newby’s crop was 6 feet and shorter this year.

The antique cane mill has a one-eighth inch opening between the iron rollers that flattens the cane to one-sixteenth of an inch when it squeezes the watery juice from the cane. Catching the flattened cane coming out of the mill, Ronald Conner said, “Ain’t it flat” as he tossed the crushed cane into a growing pile.

At one point, a bolt inside the cane mill sheared off and work had to stop while the men repaired the 130-year-old mill. One of he men said it did the same thing last year and was to be expected.

On day three of labor, the molasses was cooked starting at 8:30 a.m. and finishing around 2 p.m. On this hot fall day, the cooking will take five and a half hours of tending to the boiling, steaming mixture.

The 60 gallons of juice was poured into the 6-foot stainless steel cooking pan protected from the weather under the molasses cooking shed. The pan has a wood fire underneath to keep the juice temperature high and boiling. The two methods of cooking molasses are evaporation and batch. Newby uses the batch method, cooking the entire batch at one time.

The cooking of the juice is where the ancient art and craft of making molasses becomes important. If you cook molasses too long, it will taste strong and be thick. If you cook it too short, it will not be done and remains runny. As the greenish juice bubbles and boils, the impurities float to the top and must be skimmed off the juice. If you don’t skim the impurities off, they will cook into the molasses and make a bitter taste.

Donald Connor is a real pro at making molasses. He and his brother started helping as young boys going into the field with their mother to cut the sorghum cane.

He talked about the process during the hours of cooking.

Connor said, “It’s getting bubbles now. That’s when it’s boiling. All you could smell was green at first, but now it is beginning to smell like molasses. It is really a time consuming thing, but not as hard as stripping the cane. We always used the evaporation method at home, but this is the batch method using a pan. This is a dying art, ‘cause nobody wants to do it anymore. When we are gone, nobody will do it anymore. I’ve been around making molasses for 50 years. We usually cook it in the fall when it is cool, but it is hot today. (The temperature was in the 80s.)  I just do it for the fun, and I like people to come and watch me have fun.”

Connor admitted that he didn’t eat much molasses. “I don’t use it much. I only eat a pint a year. I just love doing it. Oh, I would like to have molasses cake like mother used to make.”

Nearing the end of cooking, Connor advised, “ When you get down to the last bit, you have to start pulling the fire away so you won’t scorch it. When it is done, it will run off the spoon like thick corn starch. It if is runny, it’s not done. If it is clumpy, it’s too done. Don’t ever cook it on a rainy day. It won’t ever get done because of the humidity.”

Volunteer Wayne Fogleman interrupts, “It’s about time. I can about taste it in the air.”

At the end of jarring the sorghum molasses into pint and quart jars, Newby gave all the volunteers, family and neighbors a pint or more if they wanted to last them until next year.

The tradition survived another year. Everyone went home with a jar of molasses and a heart full of memories. Everyone enjoyed the neighbors and friends getting together for a pinto bean lunch and the sharing of stories from the past and catching up on current conversations.