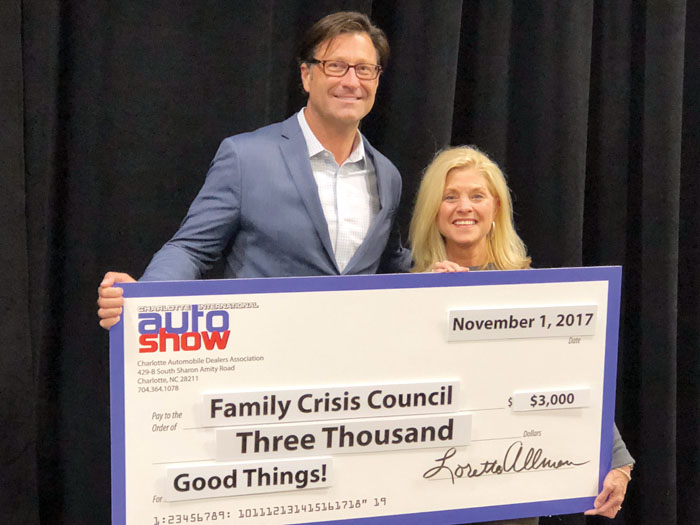 Brad Wood may have been named automobile Dealer of the Year, but a local organization feels like the true winner after his victory.

The title comes from the Charlotte Automobile Dealers Association’s first “Dealer of the Year” competition, started in an effort to raise awareness about car dealers’ impact in local communities.

General managers and owners were nominated by employees and customers. The top three finalists were awarded $1,000 for the charity of their choice.

The council is a local partner organization of United Way.

“I spent a lot of time with United Way on their allocation committee,” Wood said. “This gave me a lot of firsthand experience with the needs of the organizations they fund.”

Domestic violence, he said, is a cause that resonated with him. Some 25 percent of women have experienced this type of abuse, statistics show.

“The numbers are staggering,” he said. “Regardless of the economy, politics, it’s always a constant problem.”

Wood said he knows that even $1,000 would greatly help at the Crisis Council, though he wanted to contribute more.

Renee Bradshaw, executive director of the Family Crisis Council, said she was excited to learn about Wood’s nomination.

“Brad is such a wonderful man,” said Bradshaw. “(He and his father) have helped the people that work for me, victims that have needed cars. … They have done their best to put people in cars and take good care of them. People need to know what their dealership has done.”

After the presentation of the award, Bradshaw extended heartfelt thanks.

“I thank Brad so much,” she said. “You don’t know how much this means to the victims of abuse in Rowan County.”