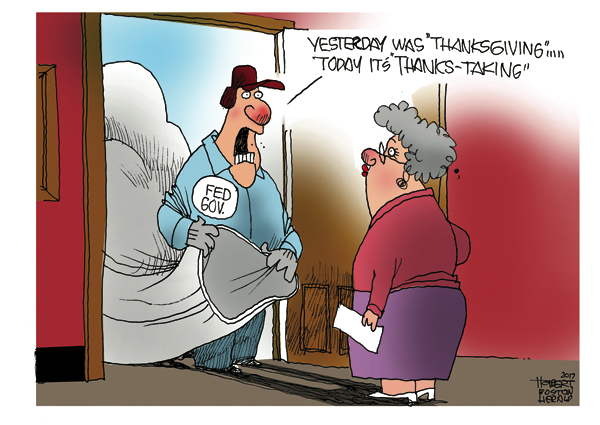 One way to kill a predatory animal is to deny it sustenance. The tax-cut bill passed by the Senate, if it clears a conference with the House and President Trump signs it, may be the first step toward starving the big government beast.

Reporting on the Senate vote early Saturday morning reflected the biases of various media outlets. Predictably, The New York Times and Washington Post characterized the cuts as favoring the “rich,” while doing nothing for the poor. Bulletin: Relatively few low-income people pay federal income taxes. They join the 46 percent of Americans who pay no taxes to Washington.

Two frustrating things about this: One is that too many people expect more from government than they expect from themselves. The Founders never intended government to be a nanny. That it has become one, egged-on by many politicians who preserve their careers by making people dependent on Washington, is why liberty shrinks and debt deepens.

The second and perhaps biggest frustration is that solutions to growing debt exist, but are ignored by many of these same politicians. They fear attacks by liberals who claim conservatives don’t care about children, the sick and elderly. One need only consider now-Speaker Paul Ryan’s proposal to reform Medicare and Social Security a few years ago. Rather than debate the merits of Ryan’s proposal, a liberal group hired an actor who was shown pushing an elderly woman in a wheelchair over a cliff.

Google “cut federal spending” and you will see dozens of suggestions. Mostly liberal and some Republican politicians don’t want to embrace them because cutting spending would reduce their power over us.

Two of these proposals deserve serious attention. One comes from Downsizing the Federal Government, a website designed to highlight where federal spending goes and how to reform each government department, which proposes shrinking “every federal department by cutting the most harmful programs. This study proposes specific cuts that would reduce federal spending by almost one-quarter and balance the budget in less than a decade.”

The philosophy behind their proposal (which is too long to reprint, so look it up) is this: “The federal government has expanded into many areas that should be left to state and local governments, businesses, charities and individuals. That expansion is sucking the life out of the private economy and creating a top-down bureaucratic society that is alien to American traditions. So cutting federal spending would enhance civil liberties by dispersing power from Washington.”

A similar proposal comes from The Heritage Foundation, a Washington, D.C.,-based conservative think tank. Nothing has changed, except more debt, since senior fellow Brian Riedl wrote it seven years ago. It includes empowering state and local governments by transferring programs and power out of Washington to governments closer to the people, consolidating duplicative programs, of which there are many, privatizing the many programs that could be done better by the private sector, elimination of outdated and unnecessary programs and the familiar elimination of waste, fraud and abuse.

I would add reform Social Security and Medicare, the main drivers of increased spending, which President Trump has hinted Republicans may try next year.

Ignoring solutions and letting the debt increase is irresponsible. With this Congress, as with many before it, sexual harassment isn’t the only example of irresponsibility.