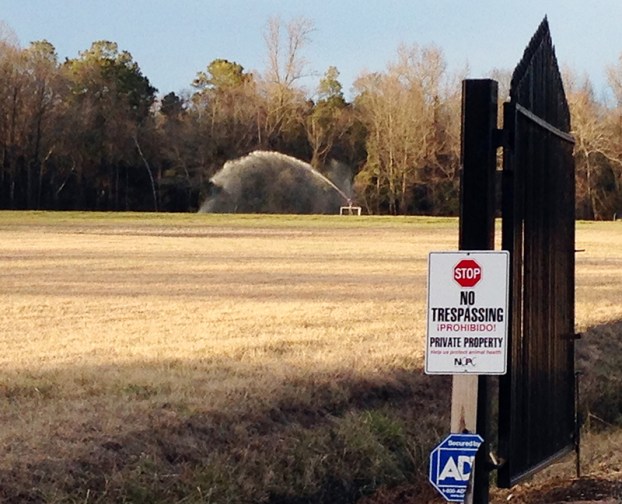 In this Jan. 29, 2015 photo, a sprayer soaks a field with liquefied manure and urine from a large-scale hog farm in Duplin County, N.C. A driving force behind some of these large-scale hog farms is Murphy-Brown LLC, which became part of the world’s largest pork producer when China-based WH Group bought corporate parent Smithfield Foods in 2013. WH Group aims to feed China’s appetite for meat with cheaper hogs from the United States according to lawsuits filed by more than 500 people across eastern North Carolina. (AP Photo/Emery Dalesio)

RALEIGH — Trials that could alter the operations and profitability of eastern North Carolina’s pork industry will start in April, a federal judge decided Monday.

The Salisbury law firm of Wallace and Graham is representing the neighbors.

The litigation by often-poor neighbors represents one of the biggest legal and financial threats to pork producers since industrial-scale hog farming took off a generation ago. Hogs were a $21 billion industry nationwide in 2015, with North Carolina operations racking up $2.3 billion of that, according to the U.S. Agriculture Department.

The neighbors contend that operations confining thousands of animals create intense nuisances like smells, noise and clouds of flies. Neighbors also have complained that wind-driven spray sometimes coats home exteriors in liquefied excrement and the smell clings to clothes.

Britt said the initial trial will involve eight to 10 households with similar complaints chosen by their lawyers. The second case following two weeks after the first trial ends will focus on the experience of a single plaintiff household chosen by livestock company Murphy-Brown’s lawyers, who said a narrowed focus was needed to understand potential liability.

New trials then would start every month until the cases are decided or dismissed or settlements are reached.

Trials reviewing the complaints of just one or two plaintiffs are needed to avoid confusing jurors, who will have to consider the location of other nearby livestock operations, how neighbors specifically use their land, and how living near hog farms affects each person individually, said an attorney representing Murphy-Brown, a subsidiary of Virginia-based pork giant Smithfield Foods.

“That sort of testimony is specific to each property,” lawyer Tennille Checkovich said. Trials involving “larger groups is going to lead to prejudice.”

Smithfield was bought in 2013 by a division of China-based WH Group, the world’s largest pork producer.

Neighbors aren’t claiming any health harms by hog operations, so a handful of trials involving groups of many plaintiffs would be best, said Mike Kaeske, one of several Texas-based attorneys working with the Wallace and Graham firm to take on politically powerful pork producers.

“There are only so many different ways somebody can say, ‘When I go outside, it stinks,'” Kaeske said.

North Carolina legislators this year considered derailing the pending lawsuits with a law limiting damages farming and forestry operations could face. The move was aimed at undercutting attorneys willing to represent neighbors with the promise that if they win they would take a cut of liability awards. The law was amended to apply to cases filed in the future.

Better Business Bureau  While phishing scams are common throughout the year, consumers may be especially vulnerable around the holidays as... read more