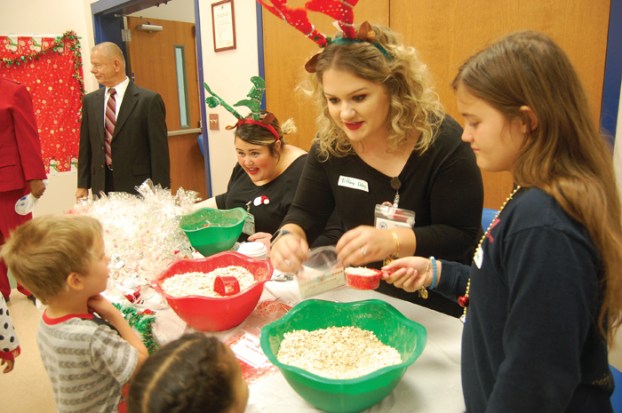 SALISBURY — Social Work Program Administrator Lisa Berger thinks of the annual Foster Family Holiday Party as one of the department’s most important days of the year.

“It gives us an opportunity to give back to our foster parents and spend some time with our children,” Berger said.

Berger said that her typical workday is “very busy,” between home visits, transporting kids to various appointments and working in the office.

But she said that it is “absolutely” worth it to come in on a day off to be with the kids and their foster families.

“We are very dedicated to all of the children that we serve,” Berger said.

On Saturday, the 16th annual edition of the Foster Family Holiday Party, there were activity stations for every age group between 0 and 18 — the age range that the Rowan County Department of Social Services (DSS) serves.

“We’re making some reindeer food. We’re doing some hot chocolate packets to take home. We have a snow cone station. All of our volunteers in here are social workers that work with these children,” Berger said.

One of those volunteers was Social Work Services Program Manager Micah Ennis, who ran the name tag station.

Ennis has been coming to the annual holiday party since it began, and she said that she tries to attend every one.

“Last year I was sick, and I was devastated. That was worse than being sick, not being able to be here,” Ennis said. “Because this is just such a special event. It’s such an opportunity to say thank you and just to honor families who make a place in their homes and their hearts for the kids that need them.”

Ennis said that about half of the children placed in foster care have to be placed outside of the county but there are not enough licensed families to place them with in the county.

She said that the difficulty of getting licensed and the slow economy could be two reasons why. But she said that DSS is working hard to give potential foster parents the support that they need.

“If someone can help us with one child, you know? … That’s one child,” Ennis said.

DSS celebrated its first ever adoption commemoration the week before the annual holiday party, on Nov. 30. The ceremony honored every Rowan County DSS child whose adoption was finalized this year.

Berger said that, moving forward, they’ll do an adoption commemoration every November, which is National Adoption Awareness Month.

“A new tradition for us,” Berger said.

The annual holiday party, which took place from 11 a.m.-1 p.m. Saturday at Rowan County DSS, was filled with both cherished traditions and new surprises.

Some of the traditions included having DSS board members serve pizza and having staff donate cookies for dessert.

There was also a photo booth where kids could get photos with Santa and a large trimmed Christmas tree.

Berger estimated that about 80 people would attend the event, with about 60 of them being children.

By Shavonne Walker shavonne.walker@salisburypost.com SALISBURY — The holidays aren’t quite the same for a local family who, a year later,... read more