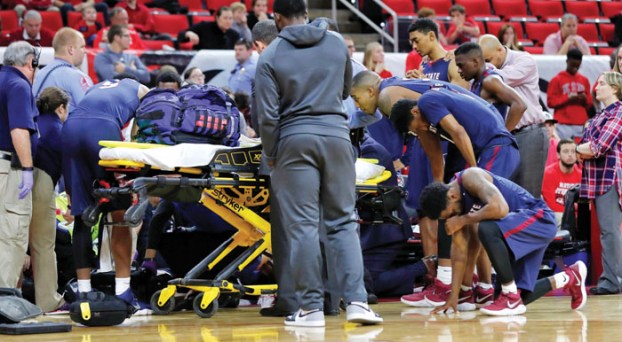 Ethan Hyman/The News & Observer via AP ... S.C. State players react as Tyvoris Solomon is attended to after he collapsed during the first half of Saturday afternoon’s college basketball game against N.C. State at PNC Arena in Raleigh.

N.C. State defeats S.C. State but that wasn't the story RALEIGH (AP) — After their teammate collapsed on the court in a terrifying scene, South Carolina State’s players wanted to honor him by resuming the game.

Tyvoris Solomon was taken to a hospital after collapsing during the first half of the Bulldogs’ 103-71 loss at North Carolina State on Saturday.

A Rex Hospital spokeswoman said Solomon was in fair condition.

Emergency medical personnel administered chest compressions to Solomon before he was removed from the court on a stretcher. The game resumed after a 40-minute delay.

S.C. State assistant coach Rio Pitt said afterward that Solomon was “up and aware” at the hospital.

South Carolina State said Saturday night that Solomon was awake and responsive and would remain in the hospital for tests and observation.

“He’s conscious, and he was talking some,” Pitt said.

“They said they would do what Ty would do, and Ty would tell us to go out there and play,” Pitt said. “That was the response the guys gave us. We let them decide.”

Solomon collapsed near the bench at the 13:08 mark. The arena went silent. Cries rang out from people around the Bulldogs’ bench as staff members fanned Solomon with a jacket.

Pitt declined to provide any details about the moments leading to Solomon’s collapse, and S.C. State players were unavailable for comment.

Bulldogs coach Murray Garvin, who accompanied Solomon to the hospital, thanked people for their “support and prayers.”

“It puts everything else in perspective,” N.C. State coach Kevin Keatts said. “At that moment, basketball is not important.”

Players and coaches from both teams looked on with concern as Solomon received medical attention. Pitt said S.C. State coach Murray Garvin dropped to his knees in prayer.

Pitt led South Carolina State for the rest of the game after Murray left.

Once they knew that Solomon was conscious and able to speak, S.C. State’s players decided to continue playing.

Donte Wright scored 16 points and Rayshawn Neal had 12 for the Bulldogs (1-7).

S.C. State: The Bulldogs competed hard in difficult circumstances after Solomon was stricken. They trailed 22-5 when Solomon left the arena, but they outscored N.C. State 28-26 over the final 13 minutes of the first half.

N.C. State: The Wolfpack started a string of three consecutive Saturday home games in predictable fashion, dispatching an overmatched opponent. They also joined their home crowd with a standing ovation for the Bulldogs when they returned to the court after Solomon was taken to the hospital.

Torin Dorn had 16 points and 10 rebounds as the Wolfpack shot a season-best 63 percent from the floor. Freeman, Yurtseven and Dorn combined to make 23 of 24 shots from the floor, with Yurtseven (8 for 9) logging the lone miss.

N.C. State scored the game’s first 15 points en route to improving to 6-0 at home. . Markell Johnson had a career-high 12 assists for the Wolfpack. . Yurtseven scored in double figures for the eighth time in nine games. . The Bulldogs lost by at least 25 points for the sixth time this season.

The teams returned to their locker rooms after Solomon left the court. While the Bulldogs pondered whether to play, Yurtseven called his family in Turkey. “I just had to reach out to my family because it’s been a while since I’ve seen them,” he said. “A situation like that makes you remember those people you care about.”

“We weren’t even worried about basketball anymore. It was more just concern for that kid and his family and hoping that he’s all right. You try to lose yourself in the game. But when something like that happens, you forget all about basketball and worry about life.” — Torin Dorn.

N.C. State hosts UMKC on Dec. 9 in the Wolfpack’s lone game this season at Reynolds Coliseum.

BOONE (AP) — Taylor Lamb passed for four touchdowns and ran for another to help Appalachian State wrap up a... read more