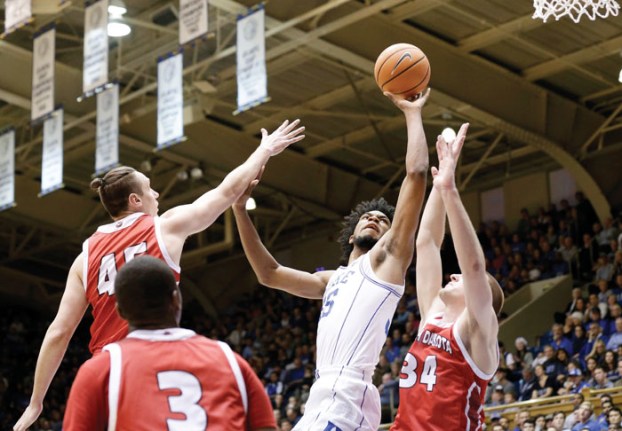 DURHAM (AP) — Duke dominated the first half to build a big lead, only to see South Dakota answer with a 50-point second half in the top-ranked Blue Devils’ famously hostile Cameron Indoor Stadium.

And for the most part, Hall of Fame coach Mike Krzyzewski was good with that.

Grayson Allen scored 15 of his 25 points in an 8-minute opening blitz to help Duke beat South Dakota 96-80 on Saturday in its first home game in nearly two travel-filled weeks.

“What I saw was a team that put the (previous) nine games behind them and showed up ready to play,” Krzyzewski said. “And I didn’t help my team as much as I could in the second half because I subbed differently.

“But that was OK, because we needed to get time for a bunch of kids. I saw us beating a good team today, overall.”

Duke (10-0) got its usual strong performances from top-liners Allen and freshman Marvin Bagley III, who had 19 points and 12 rebounds. Duke got a boost from sophomore Javin DeLaurier off the bench as Krzyzewski took a long look at his reserves in the second half.

Duke shot 62 percent to lead 56-30 by halftime, then maintained a comfortable margin the rest of the way — though South Dakota (7-3) shot 50 percent after halftime and made 7 of 13 3-point attempts to outscore the Blue Devils 50-40 after the break.

“I feel like everyone had good intensity,” Allen said. “It just kind of dropped off a little bit in the second half when they got 50 points. It’s something we have to continue through the whole game.”

Tyler Hagedorn and Nick Fuller each scored 16 points for the Coyotes, though top scorer Matt Mooney (18.3 points) struggled to just three points on 1-for-5 shooting with four turnovers.

“They did a great job of making him work for everything,” South Dakota coach Craig Smith said, adding: “He’s seen that before but certainly not against this level of competition.”

South Dakota: The Coyotes fell to 0-6 against ranked opponents in their Division I era since 2008, though this was the first matchup against No. 1 for a Summit League program.

Duke: Duke had played four straight games away from Cameron Indoor Stadium, first with three games in the PK80 Invitational in Portland, Oregon, followed by Wednesday’s visit to Indiana in the Big Ten/ACC Challenge. That win capped an opening month that saw Duke travel roughly 8,500 round-trip miles that included a win against Michigan State in the Champions Classic in Chicago on Nov. 14 — and prompted Krzyzewski to note his team has played much more than it has practiced.

“Look we’re 10-0, and with this schedule, it’s been really good,” Krzyzewski said.

Krzyzewski said DeLaurier provided “a good jolt” off the bench.

The 6-foot-10 sophomore finished with a career-best 13 points to go with nine rebounds. He also had some hustle plays, such as when he ran over to a corner and dived on the court to force a first-half tie-up — which brought Krzyzewski to his feet in applause.

“Sometimes your shot’s not always going to fall,” DeLaurier said, “but you can always play hard.”

Allen made 6 of 7 shots with three 3-pointers in the early flurry that had him single-handedly outscoring the Coyotes midway through the opening half. He made 8 of 11 shots for the game and 4 of 5 3s while also aiding the defensive effort on Mooney.

TOPS IN THE USA

Bagley posted his eighth double-double of the season to tie Minnesota’s Jordan Murphy for the national lead.

RALEIGH (AP) — After their teammate collapsed on the court in a terrifying scene, South Carolina State’s players wanted to... read more