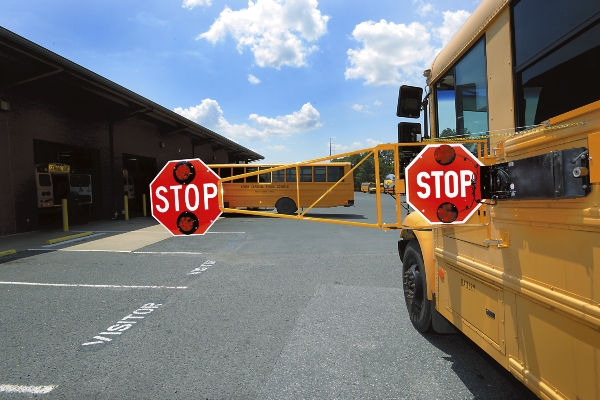 The Rowan-Salisbury Schools Transportation added a 4 foot extension to the stop arms on several buses. Photo by Wayne Hinshaw, for the Salisbury Post

My article published in November, about how some students’ bus stops aren’t safe —  like mine, at the curve where Gold Knob Road meets Luther Barger Road — got a lot of talk going, but the people who can fix the problem won’t.

The NC Board of Education Transportation Guidelines Policy Manual section on bus routes says, first, “Superintendents shall plan bus routes in a way designed to conserve fuel and to use buses efficiently,” and safety was considered third on the list. When did saving fuel become more important than the lives of students?

When my mother and I ask the Rowan-Salisbury Schools System Director of Transportation Tim Beck about moving the bus stop to a safer place because I was almost killed walking home from, as Mr. Beck refers to it, “a safe stop,” all I hear from him is they are following guidelines

I guess that all their repeated lines about safety and hoping that I and my family are satisfied with the bus stop was just a bunch of stuff they decided to say to make us think they were really going to help us but they aren’t. It doesn’t seem to matter to them what happens during the tenth of a mile I walk to and from my bus stop.

When is what happens in that tenth of a mile going to be important to the Rowan-Salisbury School System transportation team, and how many students have to be hit or killed by a car before new “guidelines” are made? I guess The Band Perry’s song, “If I Die Young,” had it right. “Funny when you’re dead how people start listenin’.” But in the end who will the joke be on, me or Tim Beck?

Barger is a senior at East Rowan High School.

In response to a letter in the Post on Nov. 30, “New collection plan will fail”: The Salisbury public services... read more