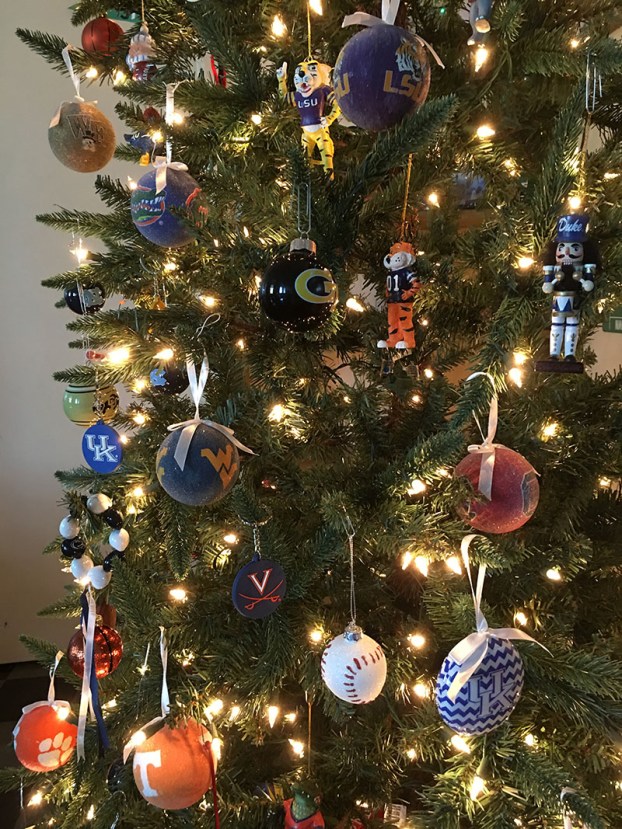 Larry Efird: The kid in all of us

Many people collect things. I happen to collect college Christmas ornaments. About five years ago, my wife lovingly implied that we had enough college stuff on our tree at home, so I begrudgingly realized she was right (she usually is). When we both noticed we had more team ornaments than Hallmark baubles, I realized I needed to redirect my fascination with college memorabilia.

I then took our old Christmas tree to school and started decorating it with all my college ornaments. Having that many school-specific decorations didn’t happen all at once. It happened over a decade or so. I think I can trace the beginning of this obsession to purchasing a gold Wake Forest ornament for my parents. They both attended there in the early 1950s, in the days of Arnold Palmer, so Wake Forest has always held a special place in my heart.    I must have liked their ornament so much that I decided to go back and buy another one for myself—and another and another.

Then I began noticing the same style of ornament for other North Carolina schools, along with the ACC and SEC, and my collecting obsession was firmly established. The main problem, however, was that the price of college ornaments is usually greatly inflated, so I had to wait until I found them marked 75 percent off after the holidays in order to justify their purchase.   It also became apparent that whenever we traveled out of state or were on vacation, I could uncannily spot a college ornament almost anywhere in a store. I had developed an eye for them, and my collection, although not an addiction, had become a bona fide hobby.

Even teenagers collect things. I teach high school boys—not girls—who have obsessions with collecting shoes. One student admitted he had over twenty pairs of tennis shoes in his closet that he only wears occasionally . Little kids enjoy collecting items as well. My grandchildren are into Pokemon. I hardly know the difference between the characters Pikachu or Charmander, but I can understand why they get so excited whenever they a get card they don’t already own.

Oftentimes, my students, and some that aren’t mine, want to take their picture with the tree. Others want to see how many different schools are represented by looking all the way up at the UNC tree-topper down to the packages placed beneath which are wrapped with bright, college-themed paper. If they can’t locate their favorite school, they interrogate me by inquiring about its conspicuous absence. Others count how many of one particular school I have and mildly reprimand me for not having enough of their favorite team.

Originally, I began collecting only Southern schools, but somewhere along the way a Penn State or Wisconsin ornament appeared on the tree, along with a Colorado and a Nebraska. I think I must have made the compromise when I found an assortment of ornaments from schools outside our region that were marked well below their original price, thus causing me to succumb to temptation.

I’ve made a practice not to hang rival schools on the same branches. That’s why you’ll never see South Carolina and Clemson in close proximity or UVA and Virginia Tech beside each other. Some State fans wish I had more Wolfpack memorabilia, but to be honest, I try to remember it’s the season of “good will to all men,” so I have attempted to make the collection equitable. After all, I am an educator.

An Oregon ornament represents the school that is farthest away, but the three from Kentucky are perhaps the most unlikely ones to be represented, due to their strained basketball relationship with ACC schools. I looked past that when I bought them because whether or not you like Kentucky, their blue is a pretty shade, though true Duke fans and Tar Heels would not want to admit it.

Perhaps the reason I enjoy my college tree the most is for the smiles that I see on the faces of unsuspecting students when they walk into my room around Christmastime.  They get to experience the wonder and innocence of childhood again at least for a moment or two. And so do I.