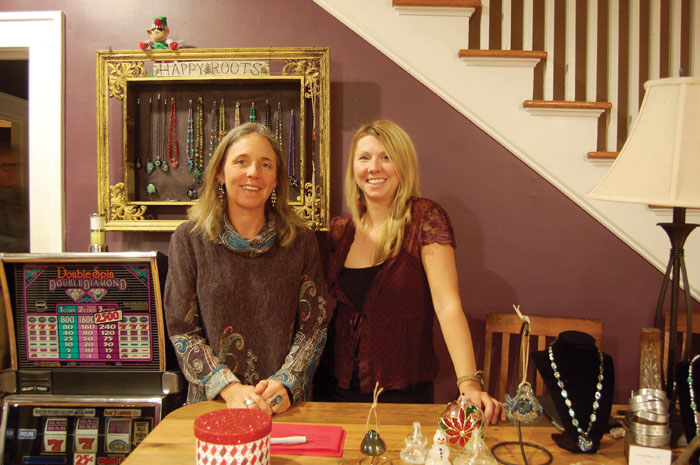 Happy Roots board members Stacey Carter and Ashley Honbarrier pose in front of one of the many displays in Happy Roots' new artist collective space. Happy Roots and SoFul Yoga were the first businesses to be featured on the annual Fulton Heights Home Tour. Photo by Jessica Coates, Salisbury Post.

But she said that this is the first year she’s featured businesses.

“Because we have the two exciting new things coming up on South Fulton,” Pitner said.

Those “two exciting things” are Happy Roots and SoFul Yoga and Wellness, both located in the 1000 block of South Fulton Street.

SoFul Yoga opened in October; Happy Roots opened in May, but got its 501(c)(3) status in February.

Stacey Carter, one of the three Happy Roots co-founders, said that the original idea of Happy Roots was to, among other things, provide youth programming in Happy Roots’ building, located at 1026 S. Fulton St.

“But then, kind of looking into the operation of that, we thought maybe it would make more sense for us to try to support other programs with what we have to offer, rather than running a separate thing,” Carter said.

Carter and her fellow co-founders, Ashley Honbarrier and Nye Hartwick, are now hoping to develop programs like equine therapy and gardening that local schools and nonprofits can incorporate into their youth programs.

Hartwick is also one of the founding yoga teachers at SoFul Yoga and Wellness.

“We have talked to the principal at Henderson (Independent High School) about starting a gardening club for their students, but the class will be open to everybody, you know, the community as well,” Carter said.

The shift in programming has left Happy Roots with space in their building, which led them to start the Happy Roots Artist Collective.

“We…consider art as, like, a natural healing. So we wanted to support the local artists and give them a space. You know, especially during the holidays,” Honbarrier said.

When an artist’s work is sold, 60 percent of the profits go to them and 40 percent go to Happy Roots.

Carter said that she’s also hoping the store will make people feel more comfortable getting to know the nonprofit.

“If people stop in and we can talk to them and meet them, then they want to be involved. It just is a little more open and inviting,” Carter said.

Pitner said that opening up the two new businesses to the public is exactly what she was trying to do.

“That kind of stuff is what I want folks to come into Fulton Heights and go, ‘Oh my gosh, I’ve always wanted to go there’ or ‘I wonder what that is,’” Pitner said.

Pitner, who has lived in Fulton Heights since 2000, has been working with the Holiday Tour since 2006.

“One of the reasons why I love this so much is that people open their homes. I want people to see what Fulton Heights is. I want folks to think, ‘I could do this. I could live in this house,’” Pitner said.

Pitner said that Fulton Heights has one of the “tightest” neighborhood associations in Salisbury. She said that, in addition to the holiday tour, it also organizes an Easter egg hunt, community picnics and holiday caroling.

“We just do lots of different activities just to invite the community in (and say,) ‘This is Fulton Heights; this is what we do,’” Pitner said.

In addition to SoFul Yoga and Happy Roots, three homes were featured on this year’s tour.

One of the homes, described as a “1930 Stucco Spanish Eclectic House” in the holiday tour brochure, is for sale. It’s located at 507 Wiley Ave.

Bret and Sarah Busby bought the house — which used to be a dilapidated rental property — this year. With the help of their children and parents, they were able to restore it in months.

“And so we are so excited that not only this house is no longer a rental but now is up to what it needs to be,” Pitner said.

The other two homes were a Wiley Avenue 1926 “Arts and Crafts” bungalow owned by Linda Jones and Buddy Farnan and a Maupin Avenue 1925 “Colonial Revival Cottage” owned by Mike and Susan Williams.