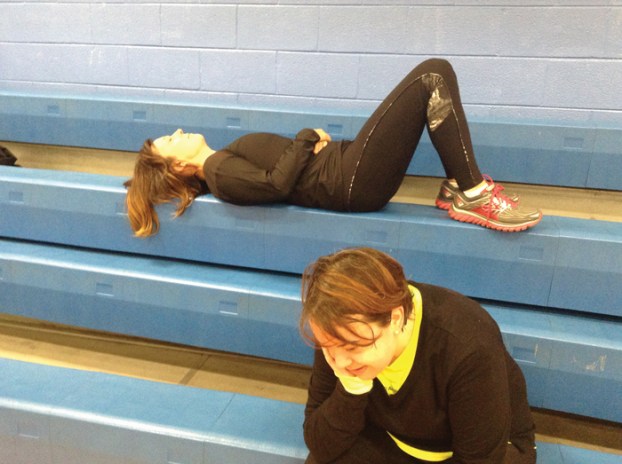 Brooke and Michelle relaxing on the bleachers at the Hurley YMCA after another 5 mile run. Photo by David Freeze

David Freeze: Brooke and Michelle — just a month to go!

With things winding down on their 2017 wellness program, Brooke Taylor and Michelle Patterson have experienced some ups and downs during November but have continued to push forward.

Brooke, circulation manager at the Rowan Public Library, had been very consistent throughout the year but suffered from soreness and tightness in the Achilles area late in November. She said, “I never thought I would be someone who would like to run, but I absolutely love it, even when it’s hard, even when I am not very good at it. It’s still a great feeling of accomplishment. Missing those few days running was not easy.

“Using My Fitness Pal has really opened my eyes to the amount of calories from fat that was in the foods I used to choose. So now when I am choosing what to eat, I can’t help but think ‘is it worth it?’ and if I have to think that, then it’s most likely not.”

Director of Fun at Patterson Farms Michelle said, “The healthiest change I have made is sticking to an exercise routine which has helped me lower my blood pressure medication. I am now down to a quarter of my early 2016 medication every other day.”

Both know they have things to still work on. Brooke included, “Overeating/eating out on the weekends has been an issue. I have a pretty strict routine that I stick with during the week, but my weekends are less ‘scheduled’ so I make poorer choices.”

Michelle added, “I have several bad habits I still need to conquer. I know I need to get more rest. I also need to drink more water and I have a tendency to skip meals during very busy times.”

I told both women that we need a big finish for December and asked how they are going to make it happen?

Brooke said, “Avoid social gatherings with lots of foods that I no longer eat, or bring my own snacks to the party. I’m wondering if I need to recalculate daily calories to maximize weight loss like in the first few months. Of course, I will keep running and riding the bike at least five days a week. I have to lose a minimum of five more pounds this month.”

Michelle said, “I will continue to incorporate exercise into my daily life. I try to make plans with friends which include exercise or a race. During the holidays, I will make healthy choices.”

With these two ladies, we often end up laughing during a portion of the workouts. Today’s climb up Marsh street after taking the long downhill on Jackson was not Brooke’s favorite. She said, “Well, that was fun!” — of course meaning that it wasn’t. I laughed. They didn’t.

But even better was a five-mile run from about two weeks ago. We were on our way east on Innes and ready to make a right turn when I cut across a parking lot at the intersection with Long Street. Brooke and Michelle both said something similar to “Hey, where you going? Are you cutting the course?” I just laughed and jumped back in behind them and we made the turn on the sidewalk.

Later that same morning at The Forum, Sheriff Kevin Auten came over and made a point of asking about what he had seen earlier that morning. He said, “I just want to tell you what it looked like to me. Were you cutting the course and they called you back in line?” I admitted that he had it exactly right.

And Richard Reinholz, executive director of the Hurley Y, mentioned to Brooke, “This 5-mile run thing is probably getting a little old, isn’t it? When are you going to step it up to six or even eight?”

When it comes to the bottom line, Brooke weighed in at exactly the same weight as she did at the end of October. As she mentioned, she struggled some with holidays and weekend eating. With just a few days to go, Brooke seemed destined to have a weight gain but she didn’t allow that to happen. Five pounds lost during December is Brooke’s final goal. She remains at 46 pounds down.

Michelle dropped another two pounds, giving her a five-pound loss since rejoining us at the end of September. She is hoping to drop four more to complete her goal of losing the nine pounds that she had gained since her final weight of 2016.

Both Brooke and Michelle ran the Santa 5K on Saturday. They also plan to do the Resolution 5K on January 1st and Winter Flight 8K on January 28. For my money, I bet they meet or exceed their December goals.

See you at year’s end!

Lynna Clark: Joy to the World

David’s mother was born on Christmas day and loved the holiday with all her heart. The first year I was... read more