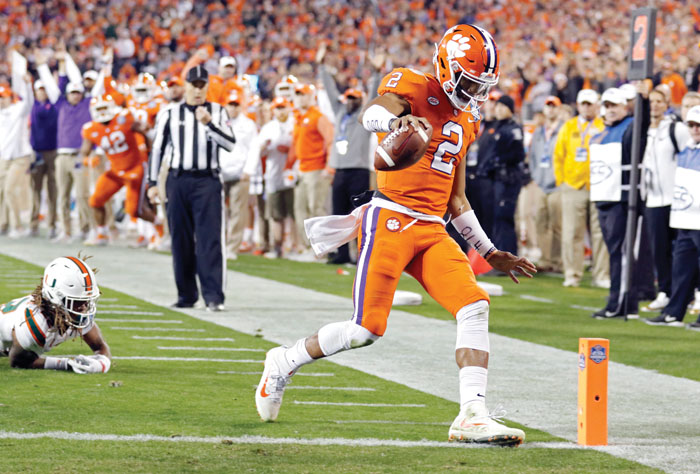 AP Photo/Bob Leverone Clemson QB Kelly Bryant (2) runs for a touchdown against Miami during the first half of the Atlantic Coast Conference championship game in Charlotte.

CHARLOTTE (AP) — No. 1 Clemson emphatically claimed its spot in the College Football Playoff with a 38-3 victory over No. 7 Miami in the Atlantic Coast Conference championship game Saturday night.

The Tigers (12-1) came in ranked atop the CFP and should remain that way following Sunday’s final poll after their decisive show left little doubt the defending national champs are looking to go back-to-back.

Clemson coach Dabo Swinney said in the postgame celebration he hadn’t been to New Orleans since going with Alabama in 1992, the then wide receiver part of that national championship squad. This time, the Tigers as top seed get their pick of sites and Swinney left no wiggle room about what he’ll choose.

Kelly Bryant set a championship game record — and surpassed his friend and former teammate Deshaun Watson’s mark of 13 — by completing his first 15 passes and finished with 252 yards passing and a 27-yard TD pass to Deon Cain on the way to Clemson’s third straight ACC crown.

“It’s just in our DNA. We’re built for moments like this,” said Bryant, named the game’s MVP.

Bryant had one of Clemson’s four rushing touchdowns and the Tigers defense made it stand up against a Hurricanes team that has been spurred on to its turnaround season by their glitzy, bling-covered “Turnover Chain” — jewelry worn by any Miami player with a pick or a fumble.

Instead, it was the Tigers who won the turnover battle (3 to 1) and held Miami to its fewest points and yards of the season to spoil the Hurricanes’ first appearance in the contest since the one-time powerhouse joined the league in 2004.

Clemson’s Travis Etienne opened the scoring with a 4-yard touchdown before Bryant’s twisting, 11-yard run for a 14-0 first-quarter lead. It was essentially over after that as the Hurricanes (10-2, No. 7 CFP) have lost two straight after rising to No. 2 in the CFP two weeks ago.

“Obviously, it didn’t go well at all,” Miami coach Mark Richt said. “It just shows they’re the class of our league and they’re the measuring stick.”

Miami fell apart in the third quarter with a pair of Malik Rosier interceptions leading to 10 points for the Tigers. The Hurricanes, who had averaged 440 yards a game this season, finished with 214 yards. The broke the shutout on Michael Badgley’s 29-yard field goal with 3:29 to go.

Miami: The Hurricanes showed they still have some growing to do to catch up with the ACC’s elite program. Miami let early chances get away — a long pass to an open receiver overthrown by Rosier, a recovered muffed punt in Clemson territory — and paid for it as the Tigers relentless offense and dominating defense took control.

Clemson: The Tigers have methodically proven themselves at every turn this year when the doubters were sure they’d falter with so many (11 new starters) fresh faces after last year’s national championship. Once more, Clemson answered the questions and will head to its third straight College Football Playoff, a likely No. 1 and favorite to win a second consecutive crown.

The title game came back to Charlotte after a year in Orlando, Florida, due to the ACC’s ban on awarding championships to North Carolina for a law that limited protections for LGBT people. The law was repealed earlier this year, the ban lifted and the contest restored to Bank of America Stadium.

Miami will most likely head to the Orange Bowl in the ACC’s usual spot.

Clemson should maintain the top spot in the CFP rankings and, with the option to choose location, will certainly choose the Sugar Bowl in New Orleans over the Rose Bowl to ensure it gets a strong crowd in the stands for the national semifinals. Its opponent will be announced Sunday.