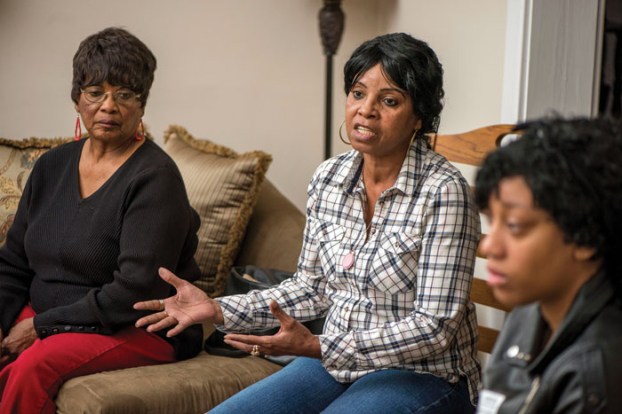 SALISBURY — The holidays aren’t quite the same for a local family who, a year later, are still filled with sadness and questions, longing for the days gone by when they could hug 7-year-old A’yanna Janae Allen. The second-grader was shot and killed Dec. 4, 2016, while she slept in the bedroom she shared with her grandmother.

Allen died instantly after a barrage of bullets swept through the Harrel Street home of her paternal grandmother, Shirley Robinson, who survived with a bullet wound to the leg. The shooting occurred around 4 a.m., just three hours after someone shot Sharod Raheen Mathis in the parking lot of Firewater Restaurant and Lounge.

Mathis, 22, was taken to the hospital where he later died. Salisbury Police have said the two crimes are connected but have not provided specific details as to how they are linked. The only arrest in either remains that of 21-year-old Savannah Marie Queen, charged with felony obstruction of justice.

Today, the senseless killing of the lovable, “never-met-a-stranger,” Koontz Elementary School student has remained a death plagued with even more questions a year later. Police continue to investigate, but no arrests have been made. No one has come forward with information that has led to an arrest despite the offer of a $20,000 reward.

The Post reached out to A’yanna Allen’s mother, Shequita Woodberry, for comment but did not receive a response by deadline. Woodberry has moved out of state, her mother says, in part because of the memories of A’yanna left here in Salisbury. Her mother explained she can’t bear to look at social media posts or reminders of A’yanna.

This Thanksgiving was just as hard as spending Christmas last year without A’yanna. April Woodberry said she and her daughter Shequita spent hours on the phone just consoling each other.

“I told her to just keep praying about it,” April Woodberry said.

Her aunt, Roneshia Woodberry, said the family celebrated even though “it didn’t feel right to celebrate a birthday for a child that’s not here.”

Rashedia Woodberry, another of A’yanna’s aunts, said her niece was an old soul in a child’s body.

The days before the shooting, A’yanna spent the weekend at Rashedia’s house. The young girl had asked to sleep over again, which Rashedia agreed to, but “next weekend never came,” she said.

The family says they’ve been told the names of a number of people who are believed to be responsible for A’yanna’s death.

“People are scared of the person responsible,” Roneshia Woodberry said.

On Dec. 4, 2016, April Woodberry received an early morning phone call from her daughter, Shequita. The young mother called to say her daughter had been shot.

“She was screaming and crying,” April Woodberry recalled.

Shequita managed to tell her mother where the shooting occurred. When April Woodberry arrived, her daughter was inside the Harrel Street house, waiting.

Shequita waited to find out from police investigators if her fears proved to be true. She was told first responders were working on the 7-year-old and Robinson, who shortly thereafter was brought out on a stretcher and taken to the hospital.

April Woodberry arrived around the same time that Robinson was brought out of the house. She waited with her daughter to learn the fate of her granddaughter.

“Fifteen minutes passed, then 30 minutes. I told her, ‘She’s got to be dead because they would be rushing her to the hospital,’ ” Woodberry said to her daughter.

When the two women realized A’yanna would not be taken to the hospital, they waited for the body bag that would soon come in order to see for themselves. They would go on to wait a couple of hours at the Harrel Street home.

“They told us we would see her at the hospital,” April said.

After sitting at the hospital for several more hours, surrounded by other family, the Woodberrys were told to go home. It would be eight hours later that the family would receive the confirmation they knew to be true. They all went to the hospital where it was explained that the 7-year-old’s body was taken to Raleigh for an autopsy.

The Woodberry family say they also waited to visit Robinson but weren’t allowed. The 56-year-old Robinson was released from the hospital the same day.

According to April Woodberry, who said she’s spoken with Robinson on a number of occasions about the shooting, she is still not clear on what occurred inside the house.

Woodberry said she was told A’yanna was lying on Robinson when the shooting took place and at other times was told the little girl slept at the foot of the bed away from her grandmother. Woodberry said she’s also been told that Robinson covered the child’s body with her own.

Woodberry said she is still unsure of where the truth lies. Shequita Woodberry has also said she’s gotten conflicting stories as to how the events unfolded during the shooting.

“My question is, ‘How did A’yannna get shot 20 times and she got shot once?’ ” April Woodberry said.

“It just doesn’t sit well with me,” Cunningham said.

The findings of the autopsy report were released in February, which showed that up to 13 shots caused 20 different wounds on the young girl’s body from her head to her toes and fingers.

“I know the Bible says you have to forgive, but I can never forget about this,” April Woodberry said.

Perhaps what hasn’t been much discussed is the death of Sharod Mathis, April Woodberry noted. She said she doesn’t want anyone to forget that he also died that day.

“I want justice for Sharod Mathis,” she said simply.

Mathis dated Shequita years ago and was like a godfather to her oldest son, April Woodberry said.

Woodberry even saw Mathis a couple of weeks before his death. He took one of her grandsons out for a ride on a dirt bike.

She has no theories as to what occurred at Firewater Restaurant and Lounge the morning Mathis was shot.

Lynn Wood, A’yanna’s great aunt and sister to April Woodberry, said she understands law enforcement officials are doing the best they can with the manpower they have. She wants the community to know her family has faith Salisbury Police will solve this case.

It has been said by friends, teachers and family that A’yanna loved to hug people and she never met a stranger. But, the little girl also loved to be “the mama” to her younger cousins and often brought them snacks or crackers on her visits to her grandmothers’ houses and to the after-school program she was a part of at Gethsemane Missionary Baptist Church.

She would place her snacks in a backpack, and one day the bag contained crab legs, A’yanna’s favorite meal.

“She said, ‘Grandma will you make me some crab legs?’ ” April Woodberry said, laughing.

All the members of the family said they hold onto the memories they made with the young girl while she was alive. And all also agreed that if A’yanna were still alive, she’d spend her time eating.

She enjoyed food and oftentimes would indulge in seconds of her favorites, which included seafood.

Shirley Robinson said her family had planned to have a seafood dinner last Christmas because it was A’yanna’s favorite.

Robinson smiled when she remembered how her granddaughter would grab her cellphone and take pictures of her while she slept. Robinson said she didn’t know how to use her cellphone, but A’yanna did.

“My life without A’yanna…it’s been horrible,” Robinson said.

Robinson said the two of them would walk to Walmart or Kmart or the neighborhood park. She would watch A’yanna do cartwheels or dance to her favorite songs.

Robinson said she will miss her granddaughter just being with her. After Shirley’s son, Antonio “Shug” Allen, died Christmas Day 2009 when A’yanna was just six months old, she just couldn’t part with the baby.

Initially, A’yanna and Shequita lived in the house, her family said, but eventually when she decided to move to Raleigh she took her daughter with her.

A’yanna was a constant reminder of the son she’d lost and Robinson wanted the girl to stay as well. Woodberry reluctantly agreed and let the girl stay primarily with her grandmother.

“She looked so much like her daddy when she was born,” Robinson said.

Robinson said she doesn’t really know what happened the night A’yanna was killed. She described hearing a noise that she believed was an electrical problem, but then quickly realized it was gunshots.

“I jumped straight up out of the bed and hollered, ‘Somebody please call the police,’ ” Robinson said.

Her nephew, Ronald Robinson Jr., who was also at the home, heard her screams for help. Robinson said when she finally became alert, she grabbed the phone and called 911 herself. She said the dispatcher then said someone was at the door.

She said A’yanna fell asleep at the foot of the bed and she was at the top. She did not detail what happened during and after the shots were fired.

“I was just in a state of shock. I just couldn’t do nothing, but just hollered,” Robinson said.

When asked if she knew she’d been shot, Robinson said she felt it and jumped straight out of the bed.

Robinson said she can’t bear to return home and hasn’t since the shooting. She lives with her son.

“That just tore my whole heart out,” she said.

“Her life was cut short too soon,” she said of A’yanna.

Robinson, who was unable to return to work, still walks with a limp.

A candlelight vigil will be held at 7:30 p.m. Monday in memory of A’yanna Allen at Rowan Memorial Park where she is buried.

Salisbury Police Chief Jerry Stokes said detectives devote time to the case frequently and follow up on any information they receive.

“Just because the process is not public, does not mean that work is not taking place,” he said.

In fact, detectives have frequent contact with the family.

Stokes said Sgt. Travis Shulenburger just sent all of the police department staff an invite from the family to a memorial service.

He noted that just because it’s been a year, the case is far from forgotten and it is still a priority for investigators.

Stokes said since the Allen investigation began, they’ve partnered with two federal law enforcement agencies — the Bureau of Alcohol, Tobacco and Firearms (ATF) and the FBI — to provide additional resources.

“We have tried to access additional resources when investigating homicides or shootings overall. That is one of the areas OJP (Office of Justice Programs Diagnostic Center) will likely help us with as far as identifying training and technical assistance for our detectives.

The Office of Justice Programs Diagnostic Center will work with the police department and residents to come up with ways to work together to address issues such as violent crime, community engagement, and the low clearance rate of homicides and gun crimes.

Everyone in the community has concerns about this case, but police say there are also issues of witness’ fear because those involved in the related Firewater murder are local gang members.

“We have not received as much information as we would have liked,” Stokes said.

He said the Community Action Planning and now the implementation effort is one of the best ways for the community to address the violent crime issues.

Anyone with information in the shootings of A’yanna Allen and Sharod Raheen Mathis are asked to contact the Salisbury Police at 704-638-5333 or Salisbury-Rowan Crime Stoppers at 1-866-639-5245.

By Jessica Coates jessica.coates@salisburypost.com CLEVELAND — After 40 years of narrating the entries at the Cleveland Lions Club parade, Terry... read more