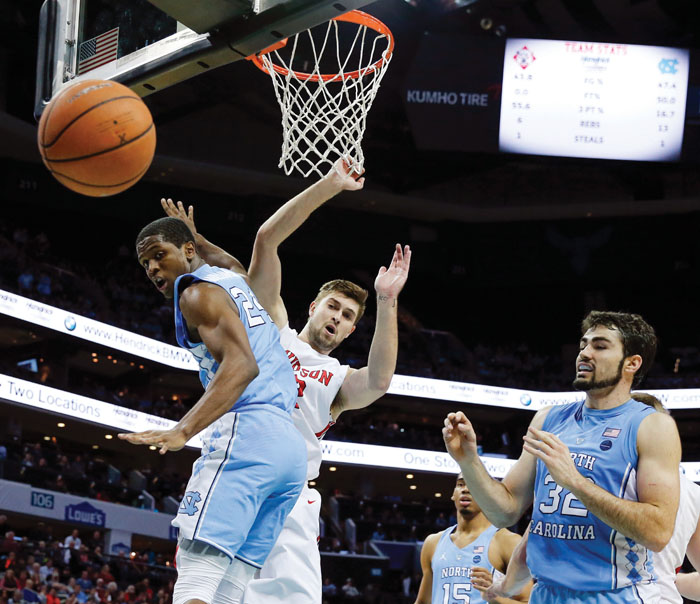 North Carolina guard Kenny Williams, left, looks back at the ball while facing Davidson during the first half of an NCAA college basketball game in Charlotte, N.C., Friday, Dec. 1, 2017. (AP Photo/Jason E. Miczek)

In the end, Maye passed up a chance to play for his hometown school and landed at North Carolina, where he is quickly developing into one of the nation’s top players.

Joel Berry II had 27 points, Maye had 24 points and a career-high 17 rebounds and No. 13 North Carolina defeated Davidson 85-75 on Friday night.

“I spent more time recruiting that young man than a lot of players,” McKillop said. “I thought he could have been a star for us, and he’s clearly a star for North Carolina. He’s sensational and I’m very happy for him.”

Maye grew up in Huntersville, North Carolina, a 10-minute drive up Interstate-77 to Davidson. He and his three brothers regularly attended McKillop’s summer basketball camps.

However, he eventually signed with North Carolina, where his father Mark played football.

“Coach McKillop was unbelievable and treated me and my family with the most respect anybody could have had,” Maye said. “It has been a place that I could call home for a long time. But I felt like I had a better opportunity to reach my goals coming to this program. I look back sometimes and wonder what would have happened, but I have no regrets. I still have tremendous respect for Davidson’s program.”

North Carolina coach Roy Williams said the biggest advice he gave to Maye’s father during the recruiting process was “don’t settle. Luke is going to be special.”

He keeps on showing it.

Maye was 10 of 18 from the field and helped the Tar Heels (7-1) dominate the Wildcats on the boards, 54-23. It was Maye’s fourth double-double of the season and second time this season he’s reached that mark in the first half.

Davidson (3-3) was led by 22 points and seven rebounds from Peyton Aldridge. Jon Axel Gudmundsson had 19 points and Kellan Grady 18 in the loss.

The Tar Heels blew open a four-point game midway through the second half with an 11-1 run led by Sterling Manley and Theo Pinson.

Manley scored on an and-one on a nifty move in the low post and followed with another short jumper. Pinson then gave the Tar Heels their first double-digit lead with two strong driving left-handed layups, including an and-one, to push the lead to 14.

Maye added two put backs on the offensive glass, including a dunk that brought the crowd to its feet, to push the lead to 18.

“They really killed us on the offensive glass,” Aldridge said. “Every time they missed it seemed like they were right there to get the rebound.”

Davidson stayed with North Carolina for the entire first half, leading in the early going and never trailing by more than six points. Berry gave the Tar Heels a 43-37 lead heading into the locker room after scoring on a drive and then burying a 3-pointer from the right wing.

North Carolina: The Tar Heels took an early punch from Davidson falling behind by seven, but didn’t panic and methodically wore down the less talented, but scrappy Wildcats with tireless work on the glass. They are playing through the soft part of their schedule now with upcoming games against Tulane, Western Carolina, Tennessee and Wofford.

Davidson: This was a solid effort for the Wildcats, who figure to be a contender in the Atlantic 10 this season. They were able to get open shots against the defending national champs with their motion offense and showed plenty of heart. Williams was forced to play his starters until the final minute of the game before emptying the bench.

SECOND-CHANCE POINTS: The Tar Heels really won the game on the glass. They had 19 offensive rebounds and outscored the Wildcats 25-5 on second-chance points.

“Their quickness to the ball, break on the ball — that was a big part of it,” McKillop said of the Tar Heels.

ROBINSON CHIPS IN: Williams was excited about the contribution of Brandon Robinson, who had a season-high eight points — all in the first half. Manley finished with seven points and four rebounds.