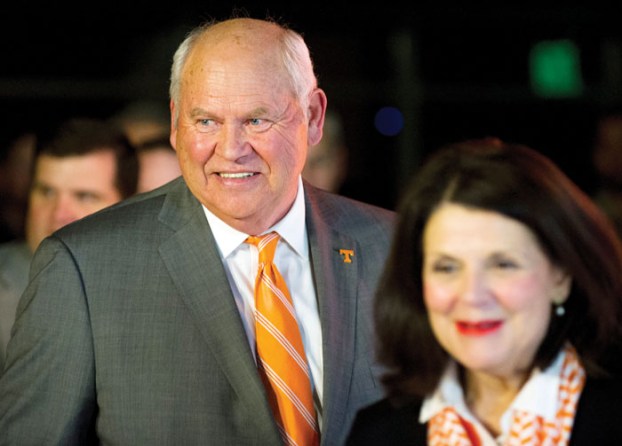 Phillip Fulmer follows University of Tennessee Chancellor Beverly Davenport into a press conference, Friday, Dec. 1, 2017, in Knoxville, Tenn., where he was named athletic director at the university. The university placed former AD John Currie on paid leave amid what has been a tumultuous and embarrassing football coaching search. (Calvin Mattheis/Knoxville News Sentinel via AP)

KNOXVILLE, Tenn. (AP) — Tennessee has turned to its familiar past to comfort its uneasy fan base in an attempt to rescue what has been a tumultuous and embarrassing football coaching search.

The man Volunteer faithful blamed for the chaos: John Currie.  Chancellor Beverly Davenport, who watched as the search was bungled seemingly at each turn, finally had enough.

So she turned everything over Friday to Phillip Fulmer, naming the College Football Hall of Famer Tennessee’s new athletic director. Fulmer replaces Currie, who was suspended and placed on paid leave just eight months after taking the job.

The chancellor said at a news conference that Fulmer will be Tennessee’s athletic director “for the foreseeable future” and “take the reins of our search.” In the meantime, the school is investigating whether it can fire Currie for cause.

“I think with the background that I have here and as well as we’ve done at different times here, with the facilities and leadership we have here, I definitely think there will be people that will be interested,” said Fulmer, who coached Tennessee to the 1998 national title.

Getting any coach interested in this job has proved challenging ever since the Nov. 12 firing of Butch Jones.

Tennessee was close to hiring Ohio State defensive coordinator Greg Schiano on Sunday before that deal fell through amid a public backlash.

It is unclear where talks with Leach currently stand.

Davenport said her decision wasn’t related to a single coaching candidate and was due to a “series of events” rather than a single tipping point.

“It has indeed been a difficult week,” Davenport said. “It’s been a difficult road to get to where we are. This has not been an easy process for any of us. I want you to know that I regret deeply any hurt that’s been caused.”

Tennessee is conducting this coaching search after possibly the most disappointing season in school history.

After being ranked in the Top 25 to start the year, Tennessee went 4-8 to set a school record for losses . The Vols were winless in Southeastern Conference competition for the first time since the league formed in 1933.

“Our football program has the history, the facilities, the tradition and the resources to play with anyone any time, and that’s what we’re going to do again,” Fulmer said.

Tennessee hasn’t won an SEC title since 1998 and hasn’t reached the SEC championship game since 2007, the year before Fulmer was replaced as coach. This marks Tennessee’s fourth coaching search since Fulmer’s exit.

Fulmer ruled out the possibility of returning to coaching by appointing himself as Jones’ replacement, but he believes his experience can help him choose an ideal candidate.

“I hope to be a stabilizing and unifying force through this just because we do have some gray hair and a lot of experience at this place,” Fulmer said. “Sometimes it’s when you’re younger that you’ve screwed it up so bad that you figure it out later and you don’t make the same mistakes again.”

Currie just took over as Tennessee’s athletic director in April . Currie agreed to a five-year contract worth at least $900,000 annually, and his buyout terms indicated he’d be owed $5.5 million if he got fired without cause. Davenport’s letter to Currie said Tennessee is investigating whether it can terminate him for cause, in which case the school wouldn’t owe him anything.

Fulmer and Currie have a complicated history.

Fulmer had publicly expressed his interest in the athletic director position, but Currie was chosen instead. Tennessee announced in June that Fulmer had been named a special adviser for community, athletics and university relations, a position that was paying him $100,000 annually. Fulmer instead will make $575,000 a year as athletic director.

Putting Fulmer in charge now won over at least some former players who had vented on social media as the coaching search dragged on .

“I think I can speak for most former Vols in that they’re excited and happy to see the person who entered their living room and sold them on Tennessee and what it meant to play at Tennessee is now leading Tennessee in a search for a head coach and a search for the person that’s going to help bring this football program back,” said Jayson Swain, a former Tennessee wide receiver who played for Fulmer and now hosts a Knoxville-based sports radio show.

It also could temporarily calm an angry fan base. About 100 fans had gathered on campus Sunday to protest a potential Schiano hire. A “Fire Currie” chant broke out a handful of times Wednesday during the Tennessee men’s basketball team’s victory over Mercer.

They got their wish. Getting a coach is the next step.

Tiger on round: ‘Successful,’ as he shoots a 68