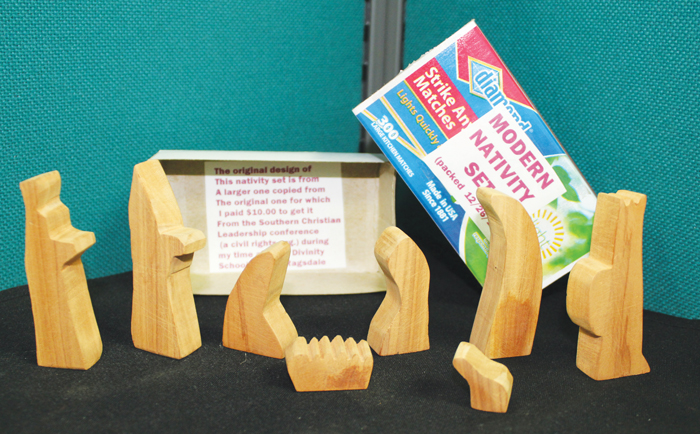 This set is a copy of the original nativity sold by the Southern Christian Leadership Conference in the late 1960s. Pastor Bill Ragsdale crafted his own design at a smaller scale using a scroll saw and cedar wood. Andie Foley/Salisbury Post

Born in 1940, the Methodist preacher was attending Duke Divinity School during the height of the Civil Rights Movement.

“I felt like things needed to get done,” he said.

So he decided to contribute.

The year was 1955, and the Montgomery Bus Boycott had begun after Rosa Parks was arrested for refusing to give up her seat to a white man on the bus. Some 381 days later, the boycott would end with the desegregation of the Montgomery bus system.

This well-known boycott was carried out by the newly established Montgomery Improvement Association, an organization that would become the Southern Christian Leadership Conference. Its president was Martin Luther King Jr.

To support the cause of the conference, Ragsdale would purchase a natural wooden Nativity being offered in a fundraiser in the late 1960s. He paid $10.

“It’s not what you would figure to be the traditional Nativity set,” he said, turning the simple silhouetted figures over in his hands. “In fact, when you look at Nativity sets … they’re done in the ethnic group from which the gospel story became real.”

Ragsdale said the natural and unpainted nature of the Nativity is a perfect reflection of that initial cause. Not only does it communicate the story of Christ’s birth with just a few simple figurines — Mary, Joseph, the manger, three wisemen, a shepherd and a sheep — but it’s an equalizer, easily transmuted to a variety of cultures.

“Missionaries have gone over there and spread the gospel … ,” he said. “People can take this and make it their own.”

Ragsdale was so fond of his initial, larger set that he made a replica in the early 1990s. That one was small enough to fit in a matchbox.

The preacher reports that, to date, he’s made eight to 10 replicas — each being sold for further charitable and Christian causes.