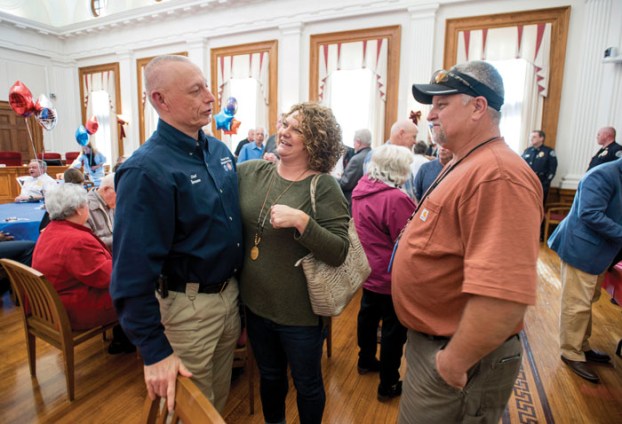 Frank Thomason (left) shares a few minutes with Joni Hobbs and Gregg Seaford at his retirement party. Thomason was showered with well wishes and mementoes from friends and colleagues he has made over his career serving Rowan County in Emergency Services. Jon C. Lakey/Salisbury Post

SALISBURY — After mingling with friends, colleagues and local leaders at his retirement reception, longtime Rowan County Emergency Services Director Frank Thomason was given the state’s highest civilian award — the Order of the Long Leaf Pine — on Thursday.

A surprised Thomason was presented the award by state Rep. Carl Ford, who said the Rowan County native is very deserving of the award and all others.

The Order of the Long Leaf Pine is given to those who have shown exemplary service to the state and their communities.

In addition to the award, Thomason received a North Carolina flag from Greg Atchley, area coordinator of the Emergency Management Division of the N.C. Department of Public Safety. Atchley said the flag was flown over the state capitol in Raleigh on Nov. 2 in honor of Thomason.

An emotional Thomason thanked everyone.

“I’m humbled and honored. My love and appreciation to each of you. I will never ever forget what you mean to me,” Thomason said.

“It has been an honor and a privilege,” he said.

“You’ve done so much to help us and the region,” Chavis said.

He said anytime he’s ever needed Thomason, all he’s ever had to do was pick up the phone and call.

Fire Division Chief Deborah Horne said she has worked with Thomason for 20 years and was brought to tears after learning of his retirement.

“He gave me my start in Emergency Services. He hired me part time as a dispatcher,” she said.

Horne would later go on to supervise fire investigators and inspectors for 29 county fire departments.

“He’s more than a supervisor; he’s our biggest supporter, our cheerleader. He pushes us to be the best we can be. If it wasn’t for him, I wouldn’t be able to live out my dream,” Horne said.

Horne and Rodney Pierce, director of the Davie County 911 center, recalled a time in the early 2000s when Thomason was in Manhattan and there was a train derailment. They paged him and he found a pay phone and talked them through the entire incident on New Year’s Eve.

“I’ve worked with Frank since the late ’90s. He does his job with care and heart. He’s more than the chief of emergency services; he’s your friend,” said Carolyn Barger, assistant to the county manager and clerk to the county commissioners.

EMS Division Chief Lennie Cooper has been in emergency services for 24 years and has worked alongside Thomason.

“We’re losing a significant amount of expertise and experience as well as a mentor and friend,” Cooper said.

In addition to friends and colleagues, Thomason was joined by his family, including sister Libby Fowler and her husband, their daughter and grandchildren.

“We are so very proud of him,” Fowler said.

Salisbury Fire Department Battalion Chief Jay Baker said he’s been working in the fire service with Thomason since 1987. He said Thomason has been on the cutting edge of local fire services and telecommunications. He said he’s always been a great resource and always gave people his best.

Thomason said he’s been lucky to have the opportunity to work in his hometown.

“To each of you, I want to say thank you for allowing me to serve you in this capacity,” Thomason said.

CONCORD — Just three weeks after the Texas church shooting that killed 26 and injured 20 others, Concord police are... read more