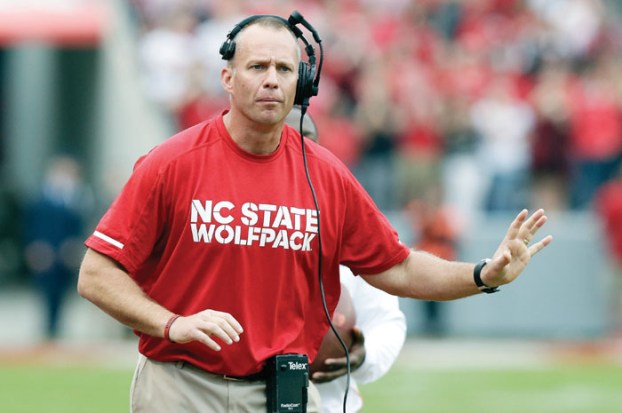 In this Saturday, Nov. 4, 2017 file photo, North Carolina State head coach Dave Doeren reacts during the first half of an NCAA college football game against Clemson in Raleigh, N.C. A person with knowledge of the situation says North Carolina State and Dave Doeren have agreed on a five-year deal after the coach had talked with Tennessee officials about the school’s opening. The person spoke to The Associated Press Thursday, Nov. 30, 2017 on condition of anonymity because N.C. State hasn’t publicly announced the agreement. (AP Photo/Gerry Broome, File)

RALEIGH (AP) — North Carolina State has announced that it has agreed to a new contract with football coach Dave Doeren.

A person familiar with the situation says the five-year deal came after Doeren talked with Tennessee officials about their coaching vacancy. The person spoke to The Associated Press Thursday on condition of anonymity because neither Tennessee nor N.C. State had publicly discussed details of the Volunteers’ coaching search.

Financial terms of the deal weren’t immediately available and it is unclear if Doeren was formally offered the Tennessee job to replace fired coach Butch Jones.

N.C. State officials announced the new agreement with Doeren on Thursday, pending approval from the school’s Board of Trustees on Friday.

“Dave has made significant strides in developing a complete program at N.C. State, and this new contract continues our commitment to his leadership,” athletic director Debbie Yow said in a release from the school. “We want to support the continued growth of the program under Dave, the culture he has established, the competitive and academic gains he’s helped us achieve and his continued progress in recruiting.”

The coach, who turns 46 on Sunday, is 33-30 in five seasons at North Carolina State. He is preparing the team for its fourth straight bowl appearance.

North Carolina State had been looking to lock up Doeren, whose previous contract runs through 2019.

Doeren had faced an uncertain future late last season before beating rival North Carolina in the regular-season finale, and after that game Yow said he would return for 2017.

His career record of 56-34 also includes two years at Northern Illinois. He’s 15-25 in conference play at the school, and his 6-2 record against ACC teams this season was by far the best of his tenure at the school. The Wolfpack (8-4) are unranked in the AP Top 25 but are No. 24 in the latest College Football Playoff rankings.

Earlier this season, North Carolina State made its first appearance in the national rankings since 2010, climbing to No. 14 in the Top 25 during a 6-1 start that was followed by back-to-back losses to top-10 teams Notre Dame and Clemson. Wins over Boston College and rival UNC sandwiched a tight loss at Wake Forest.

(This version clarifies the attribution of the length of the new deal.)

By Mike London mike.london@salisburypost.com CHARLOTTE — Colonel Bob Waggoner, a local athlete who was one of the heroes of Wake Forest’s 1955... read more