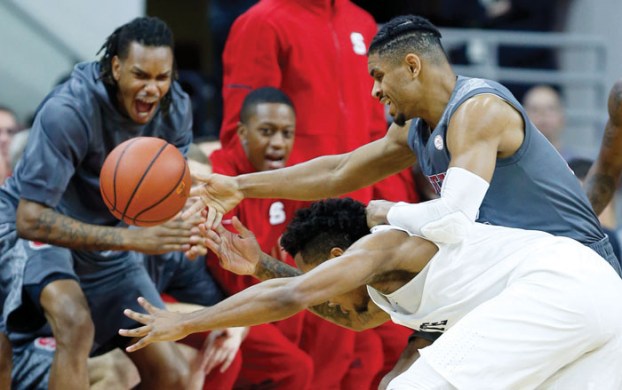 RALEIGH (AP) — North Carolina State built its big lead with sharp shooting from behind the 3-point line — then made it stand by shooting well from the free-throw line.

N.C. State held on to beat Penn State 85-78 on Wednesday night in the ACC/Big Ten Challenge.

N.C. State (6-2) hit 8 of 10 free throws in the final minute to snap the two-game losing streak that followed its upset of then-No. 2 Arizona last week in the Bahamas.

Coach Kevin “Keatts said we had the flu, and this game was our recovery,” Yurtseven said, “and now, we’re back healthy.”

Lennard Freeman finished with 10 points and Torin Dorn added 12 rebounds for the Wolfpack.

Tony Carr scored 29 points on 12-of-25 shooting for Penn State while Lamar Stevens finished with 13 points and Shep Garner added 10.

In losing for the second time in three games, the Nittany Lions (6-2) — who usually thrive on generating steals — instead had 18 turnovers, including two in the final minute.

And while they outscored N.C. State 42-26 in the paint and held a 43-35 rebounding advantage, coach Patrick Chambers said his team missed too many short-range shots and gave up too many rebounds at the wrong times.

“I love the fight that this team has,” Chambers said. “They came back, cut it to three. … We need stops. And we need to cover the glass. I thought they got some timely rebounds.”

The Wolfpack never trailed in the second half and led by 13 with just over four minutes to play before Penn State rallied, closing to 79-76 on Lamar Stevens’ stickback with 43.1 seconds remaining.

After Markell Johnson hit a free throw with 41.4 seconds left, the Nittany Lions threw the ball away on their next trip downcourt.

Braxton Beverly hit two free throws with 30.9 seconds left to stretch it to 82-76, and after Carr hit a jumper, Johnson added two more to make it a six-point game. Carr was called for an offensive foul with about 10 seconds left and Beverly iced it with a free throw with 4.7 seconds left.

Penn State: The Nittany Lions lost their first true road game of the season. Carr continued his scoring tear, but Penn State couldn’t get much from another of its key scorers.

N.C. State: The Wolfpack took care of some of the hallmarks of first-year coach Kevin Keatts’ uptempo system — shooting 3s and forcing turnovers. They have forced an average of 22.4 takeaways in their five home games, and even Yurtseven got into the 3-point-shooting act, knocking down three of them. “The thing is, if you treat every practice like games, then games are going to be just like practices,” Yurtseven said. “That’s basically the logic behind it, and whatever you do, it pays off at the end.”

The Wolfpack were down two players after forwards Darius Hicks and Abdul-Malik Abu suffered knee injuries. Abu, who missed the first four games with a sprained right knee, reported knee soreness and was held out. Hicks, who didn’t play in any of the three games in the Bahamas, tore his right anterior cruciate ligament in practice earlier this week and will miss the season. Keatts said

N.C. State’s bench outscored Penn State’s 39-9. The bulk of that was provided by Yurtseven and Hunt, as N.C. State went only three deep on the bench.

TORONTO (AP) — The Charlotte Hornets came to Canada in search of their first road win in November. They left... read more