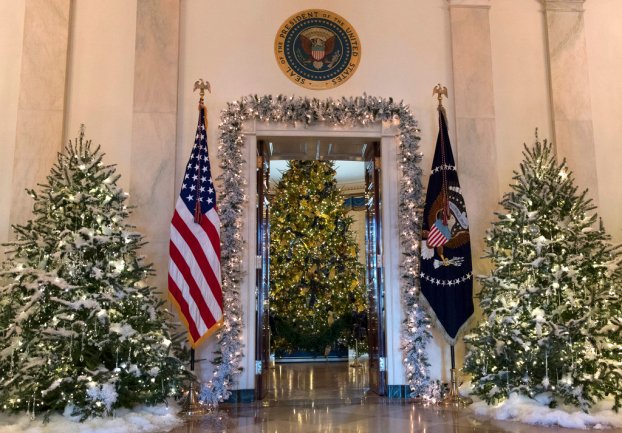 The official White House Christmas tree, center, is seen in the Blue Room during a media preview of the 2017 holiday decorations at the White House in Washington, on Monday. (AP Photo/Carolyn Kaster) Wow. That was a great one – Christmas 2012 – when the Obamas were in the White House. The president even signed an executive order giving federal employees off on Christmas Eve.

But they’re saying it was President Donald Trump who brought “Merry Christmas” back to the White House. Or at least that’s the story being peddled by Fox News, a handful of conservative bloggers and the White House itself.

The unveiling of the First Lady Melania Trump’s Christmas decorations this week – including an oddly stark and ominous hallway of bare, shadowy branches that launched a thousand memes – was hailed as some kind of victory for tradition. As though the Obamas did away with every scrap of Christmas cheer for the past eight years and ate tofurky under a Festivus tree. In Kente cloth.

The tiresome and ridiculous “war on Christmas” trope is one of the things that Trump dragged out during his campaign whenever he needed a quick cheer. He promised the nation would be saying “Merry Christmas” again, completely ignoring the fact that Obama had been saying it for years – in front of the National Christmas Tree, in the White House briefing room, to reporters, to crowds, on camera and perhaps off camera, too. MSNBC provided a delightful montage of the Obamas wishing the nation “Merry Christmas” over the years.

Keep that in mind when the Trumps and the National Christmas Tree Thursday night.

There is no war on Christmas. But there is a war on Jews, led by the white supremacists and neo-Nazis who marched in Charlottesville in August, carrying torches and chanting “No blood, no soil” and “Heil Trump” and “Jews will not replace us!”

And there is a war on Muslims, fueled by our commander in chief, who sees nothing wrong with trying to ban Muslims from entering the U.S. or fanning the flames of hatred by retweeting fake videos of purported Muslims doing despicable things.

What Christmas spirit! Perhaps we shouldn’t expect anything else from Trump, who kept claiming his predecessor wasn’t born in the United States. The Obama haters loved him for that. And they weren’t going to be dissuaded by actual facts.

Despite eight Christmases of glitter, ribbons, ornaments, gingerbread, snowflakes, Christmas trees and creches, the haters kept insisting that the Obamas tried to ban Christmas trees or even the traditional Christmas creche in the White House.

During Obama’s first year in office, one White House official had apparently floated the possibility of excising the creche from the holiday celebration. The idea was quickly shot down, and the Obama family continued the tradition of displaying the same nativity scene that has been part of White House Christmas decorations since 1967.

Still, headlines and photos of the Trump decorations this week heavily featured that creche, as though it was something new and novel in the White House.

And folks cooed at the 53 Christmas trees in this year’s White House collection, forgetting that the Obamas once had 54. To quote my favorite contemporary philosopher, Nigel Tufnel as he explained the need for a guitar amp that goes to 11: “Well, it’s one louder, isn’t it?”

But of course, the year the Obamas cranked Christmas up to 11 in 2012, they were soundly thumped for such excess in a tough economy.

“As Americans face a fiscal cliff, the Obamas make do with 54 Christmas trees,” snarked a headline in Investors Business Daily that year.

Speaking of excess, Trump’s first lighting of the National Christmas Tree promises to be an extravaganza that the American taxpayers are footing the bill for.

It’s going to cost us a little more than $128,000, which includes the price of bullet-proof glass that the Trump administration ordered up. Of course, that’s not as much as the $137,000 or so we’ve already spent on golf carts for security staff to follow him around on his 78 golf outings so far.