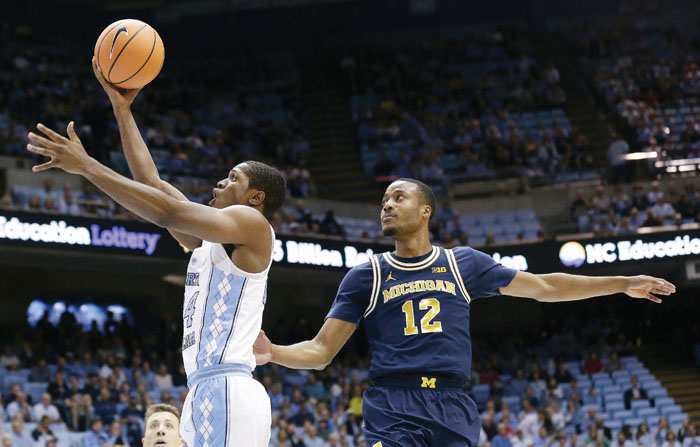 CHAPEL HILL (AP) — North Carolina coach Roy Williams spent a sleepless night stewing over an ugly weekend loss, then showed his players the film of what happens when they don’t play with the toughness or intensity needed to joust with a top-tier opponent.

It’s too early to say if his 13th-ranked Tar Heels learned from it just yet, though they at least refound their shooting touch against Michigan.

Joel Berry II added 17 points for the Tar Heels (6-1), who lost 63-45 loss to No. 3 Michigan State in the PK80 Invitational on Sunday night. That included them shooting a program-record-low 24.6 percent, making just 1 of 18 3-point attempts and meekly responding to a team that came after them defensively.

“I’m not one of those coaches that’s just going to say, ‘Oh it’s a bad game, well let’s go on,’” Williams said, adding: “You make those kind of mistakes and have people outwork you with more intensity and more effort, I think you’ve got to show them.”

“We’ve had seasons where we’ve lost early and the rest of the season went well for us,” Berry said. “So it’s not time to panic, it’s just time to get better and start buying into the system and understand what’s going on.”

Moe Wagner scored 20 points to lead Michigan (6-2), which cooled quickly after a hot start and couldn’t keep up once UNC got rolling.

“You’ve got to guard and rebound the ball,” Wagner said. “We didn’t do both of them in the first half really well, so if you put yourself in a hole like that the first half, it’s really hard to come back.”

While the Tar Heels let loose some pent-up frustration, it helped, too, that they were back home for the first time in two weeks after an extended trip west that included a win at Stanford before three PK80 games in Portland, Oregon.

“It was a little bit of a relief on Monday morning when we got here,” said junior Kenny Williams, who had 12 points. “just because we were out there for so long.”

Maye had eight points on 3-for-13 shooting against Michigan State, but made 11 of 16 shots for his fifth 20-point game this season.

“I kind of wanted to bounce back from our game against Michigan State,” Maye said. “I think all of us did.”

North Carolina didn’t miss consecutive shots from the field at any point and shot 65 percent during that first half. … This was the first meeting since UNC’s 77-71 win in the 1993 NCAA title game that included Chris Webber famously calling a late timeout that the Wolverines didn’t have. UNC honored members of that ‘93 team during a first-half timeout, too. … Michigan is 2-6 in Challenge road games. … UNC made 7 of 15 3-point attempts, with Berry and Kenny Williams each making three.

UNC: The Tar Heels travel to Charlotte to face Davidson on Friday.