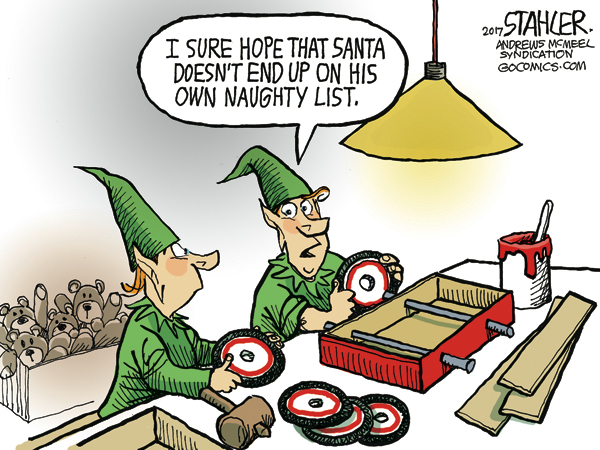 Yes, we did try to keep the PFLAG shirts on, but the parade staff did explain their policy on that aspect. We offered to remove our shirts, turn them inside out, cover them up, etc. We even jokingly wrote AVITA on our shirts with markers but we did comply with the policy and removed our PFLAG shirts.

The two volunteers we were dealing with stated they would have to speak with the pharmacy contact person when she arrived. They left, nothing else was said, so we thought everything was in order since we removed all PFLAG attire. And so we kept the rainbow adornments. A little later, one of the parade volunteers came back by and personally told me that my rainbow wrist bands would probably not be allowed. Or the rainbow stripe around our hats. Or any flags. …

When the pharmacy staff offered to show the parade volunteer pictures proving the rainbow theme is included in their company branding, the volunteer immediately said, “We can offer you a refund.”

The parade staff’s demeanor was not of one trying to resolve the confusion. It was dismissive. We asked other parade participants if they had to describe in minute detail what the costumes included and they stated no.

Yet another negative mark on this city I grew up in and love. It is angering and saddening that an event that has always brought our community together ended up being so wrongly discriminatory.

I’ve seen pentagrams (and other, let’s say, interesting symbols) in the parade but rainbows aren’t allowed. … I am proud of the police and Cline who supported Avita and were helpful to them. And of course proud of Avita for standing up for what’s right.

“Because group doesn’t reflect ‘values’ of parade.” Salisbury Post, where did you get this piece of information? I’m just curious.

I got that from Wesley Perry’s response via email to the Post’s request for comment. His entire comment was:

“As the Holiday Caravan Board is made up of individuals from the community much the same way as Salisbury PFLAG and Charlotte Pride groups. We also have the same ‘rights’ to decline participation at our events from any group or organization which do not reflect the mission, vision and values of our organization.

“You have been given information that they have been denied an entry for the last five years. We received an application from them in 2014 and 2015, which the board did not approve. We have received no other applications from them.

The Avita Pharmacy application was falsified as her intentions were to put the PFLAG and Pride banners on the float from the start. As we had made similar decisions to decline participation from other groups and organizations that we feel does not reflect the purpose of the Holiday Caravan Parade.

“Avita Pharmacy was removed from the parade based on our policy 2.B.” (“All units must be faithful to their descriptions a submitted to the parade …”)

Y’all mad because gays aren’t allowed in the parade, but where’s the outrage over crime and drug abuse? People need to sort out their priorities.

My sincerest apologies to PFLAG, the pharmacy and everyone else in the community affected by this hateful act of exclusion.

Unfortunately, this isn’t a very good representation of all the LGBT allies that live here. I’m furious and ashamed and I’m sorry my city has made you feel this way.

No parade geared toward families with children should feature an exhibit whose premise is centered around sexuality of any type. Good grief.

Let children have a normal childhood and leave it up to the individual sets of “progressive” (aka there is no such thing as wrong/if it feels good, do it) parents to confuse only their own into no chance of experiencing a normal childhood. Sex-oriented groups already have their own parade. They don’t need to show off everywhere.

Thank you, Holiday Caravan board, for doing the right thing — not what is politically correct.

Obviously these people wanted a parade without a homosexual agenda, but y’all just can’t have that. …

Well, double bless you. No one denied gay people from participating in the parade. They denied the promotion of their sexuality in the parade. The bedroom activity is what makes the homosexuals. It ain’t rocket science, darlin’.

It had nothing to do with sexuality. It was advocacy for the LGBTQ community. Everyone should be able to be who they are. I am a Christian and I think my God is a god of love, and he doesn’t make a mistake in creating us.

I have always been taught to be kind to others because we do not understand the struggles they go through. If it is your child or someone you love in your family, it really changes how you understand the LGBTQ community.

The events at play in this specific circumstance had nothing at all to do with an “agenda” and everything to do with a small group of LGBT allies wanting to participate in a celebratory community event.

When we reduce people to “issues,” we remove empathy and humanity from the conversation. And that, to me, is the biggest shame in all of this.

… Residents should roll up sleeves and help City Council

I am looking forward to watching what these five talented minds can do when they come together as a council and put the citizens of Salisbury first in all their decisions.

I am truly excited to attend the ceremony on Dec. 5 as Salisbury adds its name to the many similar historical events in other communities around the country and North Carolina by swearing in and welcoming the city’s first African-American woman mayor.

Thank you, Dora Mbuwayesango, for expressing so beautifully what so many of us are feeling.

And, yes, you are absolutely correct to say that we citizens must be accountable — and that means voting, participating in boards and committees, attending council meetings so that we understand the processes, and in any way each of us is able to contribute. It is in this way that transparency can be expected and demanded. It is in this way that we can help our council do the best job possible.

Let’s resolve to make this a sea change for Salisbury politics.

Ada Fisher is a Republican in the classically true sense of the word, whether one agrees with her or not. A major problem with today’s GOP is its takeover by those who favor exclusion through nativism, racism and vulture capitalism at the expense of citizens who do not share their world view.

I pray that Ada can influence enough positive and constructive changes in the party of her choice. If she and other like (minded) conservatives fail to do so, the Republican Party will no longer be grand.

Poachers and sport hunters have more in common than perhaps you have chosen to acknowledge. …

The sport hunter is supported by an arsenal of sorts … big, powerful, conservative/Republican politically, motivated by not the alleged concern for conservation or hungry African villages, but rather the NRA, and the preservation of “happiness is a big warm gun” and rich, usually great, white hunters, dressed in correct gear, smiling broadly, gloating in their photos, always positioned to make both dead animal and long gun even bigger than reality. Where is the sport?

OK, the commonality is that neither poacher nor sport hunters is in Africa for any other reason than to pilfer and profit in a continent that is reeling from internal and external exploitation.

It was the White House that wanted to remove existing protections. Now, since other GOP’ers protested and Trump backed off, now Trump is saving the elephants?

I don’t know about the other elementary schools, but the Morgan kids already have long bus rides. I hope they don’t get longer by having to go to schools farther away. And they just got a nice playground by their own efforts!

This will be a heavy lift. Good luck, school board members !

The school board deserves our gratitude for having the courage to begin a discussion about what to do with shrinking enrollment. It will not be an easy or pleasant task ahead, and not everyone will be pleased with the ultimate plan.

Constructive input from diverse stakeholders around the county will be vital to a productive outcome that reflects the values of our community as a whole.

RALEIGH — North Carolina has collected less state revenue so far than projected for the 2017-18 fiscal year, to the... read more