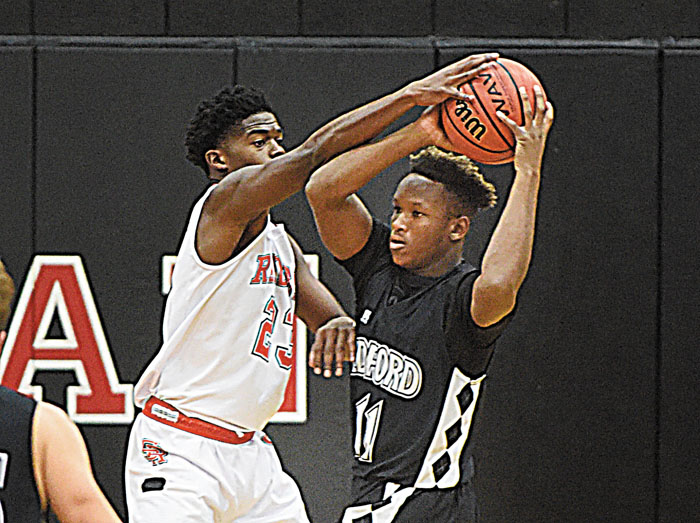 The league newcomers never trailed and picked up their first conference victory Wednesday night when they outlasted visiting Ledford, 66-60.

“It wasn’t a pretty win. It was an ugly win, but a W is a W,” coach Andre McCain said with a post-game smile. “We need games like this to learn how to win and continue growing.”

The Raiders (1-1 CCC) lost their first 23 games last season as members of the 3A South Piedmont Conference and snapped a 47-game losing streak with a season-ending victory against East Rowan. That made this — their second consecutive home triumph — a noteworthy occasion.

“We’re getting wins at the start of the season now,” senior Bailey Graham said after topping all scorers with 19 points. “We can’t stall anymore, can’t slow it down. We need to go, go, go.”

It wasn’t a breathtaking race to the finish by any means. Instead, South converted nine of 12 free throws in the last 1:26 to prevail, the last four by senior Dillon Kluttz in the final 12 seconds.

“Those are simple shots that you’ve got to knock down,” he said. “Everybody’s got to make free throws.”

South was beaten by eight points in its CCC opener Tuesday night at East Davidson, yet somehow took a 23-12 first-quarter lead against Ledford (1-1). Graham buried two 3-pointers while senior forward Tyrese Shaver scored nine of his 16 points in the first eight minutes.

“People came to see a show so we gave them one,” he said afterward. “We’ve been in these situations many times and didn’t come through. Tonight, right from the start, we all played our hardest.”

So did Ledford. Second-quarter turnovers hurt the Raiders as the guests closed within 29-25 at the half. And when junior Robert Little buried a short jumper from the inside the lane, it was tied 38-all with 2:32 remaining in the third period.

“Coming from behind — that was a constant battle all night,” said LHS coach Jonathan Leonard. “Offensively we had no identity. There was too much one-on-one. The one thing we didn’t want to do was get put in a hole, but that’s exactly what happened.”

It happened early in the fourth quarter, when first-year senior Jordan Oglesby drained a 3-pointer from the right side, then stole the ball and drove for an uncontested layup. By the time he snared an offensive rebound and hit a putback, South owned a 48-40 lead with seven minutes to play.

“He came off the bench and provided a spark,” McCain said. “He did it with offense and defense.”

Ledford inched within 50-45 when Walker Lackey beamed in a 3-ball from the top of the key — and later within 62-60 when he quickstepped down the lane for a layup with 13 seconds to play. Sandwiched between those plays was Graham’s bullet pass underneath to Shaver for a had-to-have-it layup that made it 52-45.

“Went right through two defenders,” Shaver said with a sideways glance. “(Graham) knows how to look in the right place.”

“That was just basketball,” Graham added. “While I was dribbling I was looking for a shot or a chance to make a play. All of a sudden a slot opened and I got it to him in a hurry.”

South’s last field goal came when Shaver muscled his way for a layup and a 57-50 lead with 2:11 on the clock. It set the stage for Kluttz’s foul-line marksmanship — and he didn’t disappoint.

“We’re trying to build a winning culture,” Kluttz said. “A game like this gets us in the right mindset. We don’t get down on ourselves anymore. We just want to continue winning.”