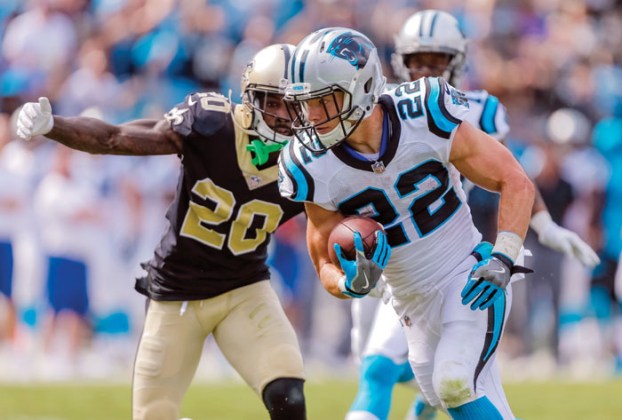 CHARLOTTE (AP) — The Panthers are heading into the biggest game of their season with some major injury concerns.

Carolina (8-3) is tied with New Orleans for first place in the NFC South entering Sunday’s pivotal showdown at the Superdome. But just how many Panthers will be available to play remains a mystery.

Three starters — running back Christian McCaffrey (shoulder), wide receiver Devin Funchess (toe) and tight end Greg Olsen (foot) — did not practice on Wednesday as the team returned to work after a road win against the New York Jets on Sunday.

“It’s always a concern,” Panthers coach Ron Rivera said Wednesday of the injuries. “You just don’t know. I’m like you guys — I won’t know until tomorrow.”

Newton is expected to play, although he’s still wearing a glove during practice to protect his banged up right thumb. The seventh-year quarterback struggled this past Sunday against the Jets with his accuracy after injuring the thumb the week before.

Rivera offered little else about the prospect of Newton’s top three targets in the passing game — McCaffrey, Funchess and Olsen — being ready for this week, although he suggested some players believed the turf at MetLife Stadium might have contributed to their injuries.

The Panthers have momentum on their side heading into Sunday’s game having won four straight games.

The Saints had won eight straight prior to last week’s loss to the Los Angeles Rams, which dropped them back into a tie with Carolina.

However, the Saints appear to match up well against the Panthers.

They dominated Carolina in Week 3, winning 34-13. They came into that game 0-2, but used it as a springboard for an eight-game win streak.

But Rivera said the Panthers are a better team than they were in September with Newton healthier following offseason shoulder surgery and the offense beginning to click.

“We struggled a lot, but I also felt like we were getting used to each other,” Rivera said. “I think we’re at a point now where our quarterback is healthier than he was at the start of the season and we have a better feel and understanding of the players we have — the playmakers. And our offense has settled in.”

Newton ran a season-low three times for 16 yards in the previous loss to the Saints as the Panthers were looking to bring him back slowly from surgery.

After the game, Saints defensive end Cam Jordan said he liked the idea the Panthers were trying to turn their quarterback into a pocket passer because it made Newton much easier to defend.

“I didn’t know he was a fan of my dress code,” Newton said Wednesday of Jordan. “Obviously he’s been paying attention. Nevertheless, that’s flattering to me. If he sends me his address, I can send him some sauce.”

If the plan was to make Newton a pocket passer, that plan was scrapped in Week 4.

The former MVP has been averaging around 8 ½ carries per game since the fourth week of the season. Not coincidentally, the Panthers are winning games.

Rivera’s main concern is shutting down Drew Brees, who he called a first ballot Hall of Fame quarterback. Brees completed 22 of 29 passes for 220 yards and three touchdowns against the Panthers in the previous meeting.

“We know what is at stake,” Panthers cornerback Captain Munnerlyn said. “We took it personal last time because they beat us in our house. We have a chance to play them in their house and take the lead in our division. I’m back this week and I’m excited.”