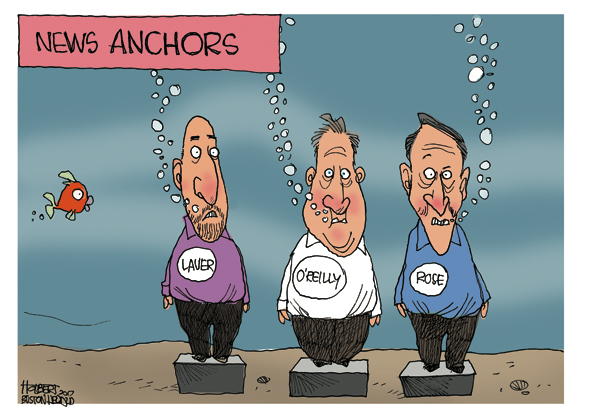 At the time, it looked like just the sort of coup befitting the titan of morning network news. Matt Lauer scored a headline-making interview with Bill O’Reilly six months after O’Reilly was ousted from Fox News over sexual-harassment allegations. Though Lauer missed a couple of fine points, he pressed O’Reilly over and over again on his history at Fox News.

“You were probably the last guy in the world that they wanted to fire, because you were the guy that the ratings and the revenues were built on. You carried that network on your shoulders for a lot of years. So doesn’t it seem safe to assume that the people at Fox News were given some information or given some evidence that made it impossible for you to stay on at Fox News?”

Lauer stuck with it: “But you don’t let your No. 1 guy go, unless you have information …,” Lauer said to O’Reilly, who attributed the firing to a “business decision.”

As Lauer blasted away at O’Reilly, firm denials and bluster came back. Amid the tension, Lauer admirably assumed one of his “Today” show personas, that of the earnest and prepared newsman. The takeaway was unmistakable: A fine and upstanding man was taking on a disgraced, arrogant and unaccountable man.

Now it appears that we were looking at a mirror-like reflection. On Wednesday morning, NBC News announced the termination of Lauer based on an allegation of sexual misconduct that violated company standards. Though NBC News didn’t initially release details on the misconduct, Variety has helped to fill in some telling context. Just sample this reporting:

“As the co-host of NBC’s ‘Today,’ Matt Lauer once gave a colleague a sex toy as a present. It included an explicit note about how he wanted to use it on her, which left her mortified.

“On another day, he summoned a different female employee to his office, and then dropped his pants, showing her his penis. After the employee declined to do anything, visibly shaken, he reprimanded her for not engaging in a sexual act.

“He would sometimes quiz female producers about who they’d slept with, offering to trade names. And he loved to engage in a crass quiz game with men and women in the office: “f—, marry, or kill,” in which he would identify the female co-hosts that he’d most like to sleep with.”

The Variety investigation was chugging along for two months, according to the trade publication. That puts its launch in the vicinity of Lauer’s Sept. 19 interview with O’Reilly. Who at NBC News could have decided that this pairing was appropriate? Was the culture of denial and entitlement and suppression so strong that Lauer could have pulled off this charade with a straight face? What the heck?

Those are just a few of the questions that merit answers from NBC News brass. A bigger one: As reported by Variety, NBC News employees had indeed lodged complaints about Lauer with company executives, but they fell on “deaf ears” because of the ratings that Lauer had helped to secure for the NBC News morning franchise. What happened to those complaints? How widely were they shared? Whose ears were deaf?

NBC News might consider divulging that information – or perhaps waiting for others to do so for them. Consider that NBC News in mid-November fired Matthew Zimmerman, who worked closely with Lauer on bookings for the “Today” show, for “inappropriate conduct with more than one woman at NBCU, which violated company policy.” For how long did NBC News brass know that Lauer – that wonderful guy on the set of “Today” – was perpetrating a creepy fraud on the viewers of NBC News?

Answers are starting to dribble out. NBC has released a statement: “We can say unequivocally that, prior to Monday night, current NBC News management was never made aware of any complaints about Matt Lauer’s conduct.”