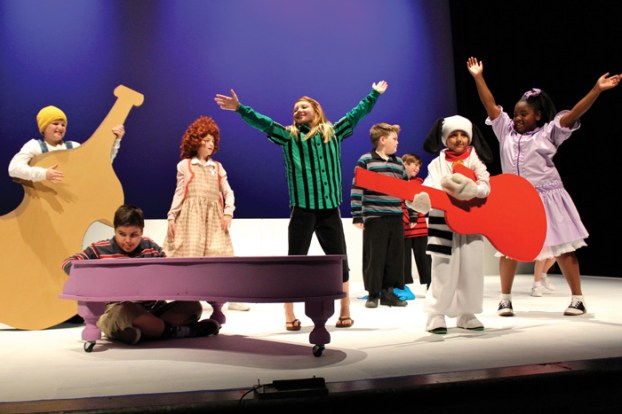 Photo by Josh Wainright The cast of 'A Charlie Brown Christmas' at the Norvell Theatre, Dec. 7-9 and 14-16.

Holiday classic comes to life on the Norvell Theater stage When Charlie Brown becomes discouraged by the materialism of the season, Lucy convinces him to direct the Christmas play. In typical Charlie Brown fashion, things go awry when he selects a tiny fir tree for the production in an attempt to restore the true holiday spirit. It’s up to Linus to save the day and remind everyone of the real meaning of Christmas.

The classic animated television special, “A Charlie Brown Christmas,” comes to life on the Norvell stage next Thursday in a faithful stage adaptation, in which Charlie Brown, Snoopy, and the rest of the Peanuts Gang discover the true meaning of Christmas. Piedmont Players Theatre’s production of “A Charlie Brown Christmas” was adapted for the stage by Eric Schaeffer and features the iconic jazz score by pianist Vince Guaraldi.

Based on the popular Peanuts comic strip by Charles Schultz, the Emmy and Peabody Award-winning television special by Bill Melendez and Lee Mendelson has become an annual broadcast in the United States, and has been aired during the Christmas season traditionally every year since its premiere, becoming the second longest running Christmas special after Rudolph the Red Nosed Reindeer.

Produced in less than 6 months with a shoestring budget of just $76,000 and despite predictions of failure by network executives, the original special premiered on CBS on Dec. 9, 1965 and was viewed by an estimated 15 million people (approx. 45 percent of people watching TV that night) receiving unanimous critical acclaim. Guaraldi’s soundtrack also achieved commercial success, selling more than four million copies.

The special marked the first time children voiced animated characters and established the half-hour animated special as a television tradition, inspiring the creation of numerous others, including How the Grinch Stole Christmas! (1966) and Frosty the Snowman (1969).

Beginning next Thursday night, Piedmont Players Theatre invites audiences of all ages to join the Peanuts characters at the Norvell Theater to share the magic of the season and rediscover the true meaning of Christmas.

Annual holiday downtown night out Share in holiday cheer while enjoying shopping opportunities in the many charming shops during... read more