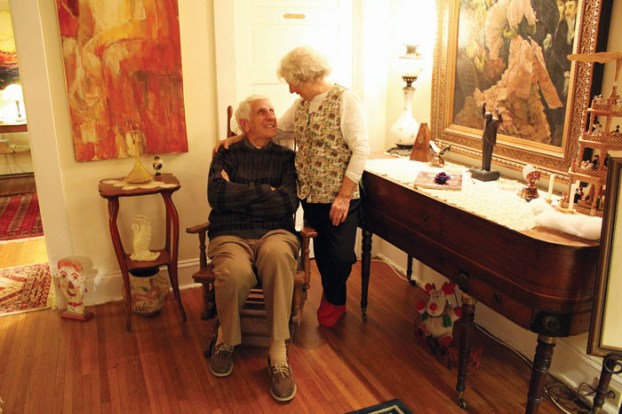 Buddy Farnan and Linda Jones' share a look near their tiny, early 19th century piano. Farnan and Jones' have an eclectic collection of art throughout their home. Andie Foley/Salisbury Post

SALISBURY — Linda Jones and her partner, Buddy Farnan, are avid supporters of the arts.

They both have a particular fondness for folk art, having bonded over Farnan’s personal collection some years ago. Jones was working as the marketing director for Four Seasons Town Centre in Greensboro, and Farnan worked with a company that decorated malls for the holidays.

Today, this shared love of art is reflected in the charmingly eccentric decor of their home, one of five sites featured on this year’s Fulton Heights Holiday Tour.

Jones and Farnan describe their home as a 1926 arts-and-crafts bungalow. It’s located at 715 Wiley Ave, and, after 30 years of shared collecting, holds so much more than just folk art.

“We like to joke and say that the house is mine, (but) everything in it is his,” Jones said.

The walls of the bungalow are lined with paintings, from classical styles to modern pieces. There’s a vibrantly colored fish by James Taylor, a Glenn Yost portrait of a violinist, even a faux Van Gogh, painstakingly painted by a professor in Poland.

Their collections extend far beyond paintings and folk-artsy, found pieces, of course.

Much of their furniture is from the 19th century, some dating as early as 1802 – a tiny piano in the home’s front room, for example.

Even the rugs in the home have a story. Farnan pointed out a piece he picked up at auction owned previously by country music singer Conway Twitty.

This is the pair’s first year participating in the holiday tour. As avid art and antique collectors, they enjoy opportunities to share their long-amassed belongings. Andie Foley / Salisbury Post – Buddy Farnan and Linda Jones’ carousel horse is already decorated for the Fulton Heights Holiday Tour this Saturday. Farnan and Jones’ home is one of five on the tour.

Farnan said he personally knew the artists behind at least half of his and Jones’ collection,

“The bad part about having friends who are artists is you have to buy their stuff,” he said, then continued with a laugh. “Fortunately for us, we like it.”

Locals will be able to tour Jones and Farnan’s place this Saturday for a $10 suggested donation.

There are four additional sites on the tour.

There’s a 1930 “stucco Spanish eclectic house,” as described in the brochure. Located on 507 Wiley Ave., it was recently renovated and is currently for sale.

Another is the 1925 Colonial Revival cottage at 701 Maupin Ave. The property includes three lots, and current owners Mike and Susan Williams have worked dutifully since 2008 to highlight its extensive landscaping.

The last two participants are area businesses: SoFul Yoga and Wellness and Happy Roots. Both spaces date back to the early 20th century (1905 and 1910, respectively) and are on South Fulton Street.

The Fulton Heights Holiday Tour started in 2006 as an informal viewing of homes in the neighborhood. By 2013, it saw a significant increase in popularity – both in participating homes and in potential attendees.

The Fulton Heights Neighborhood Association now orchestrates the tour each year. Participating homes and businesses are decorated for the season and open for tours for a nominal donation.

Residents of Fulton Heights can also pay their annual $20 dues at any participating site.

Visitors can pay the donation at any of the sites on the tour. Each site will have brochures available with information on participating locations.

Houses and businesses will be marked with red yard signs.

Both Jones and Farman said they are excited to share their collection with the public. They hope their home serves as a reminder to support the arts.

“(Art) adds color to my life,” Jones said. “It could be a black-and-white world without art, but art adds color and whimsy and heart. You can’t spell heart without art.”

“If it pleases other people for them to come and see what we’ve got, imagine what it does for us to share it,” he said.

SALISBURY — Every year for the past six years, Mayor Pro Tem Maggie Blackwell has used birthday cake as an... read more