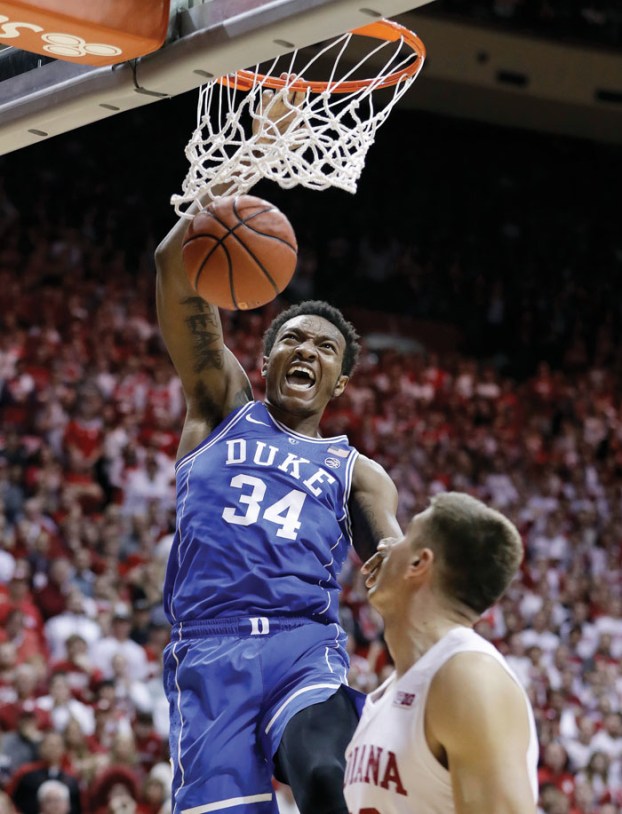 BLOOMINGTON, Ind. (AP) — Marvin Bagley III finished with 23 points and 10 rebounds and Grayson Allen added 21 points to help No. 1 Duke get past pesky Indiana 91-81 on Wednesday night in the Big Ten/ACC Challenge.

It sure wasn’t easy for the Blue Devils (9-0), who needed a late 17-4 spurt to finally pull away for their first true road win of the season. Wendell Carter Jr. had 18 points and 12 rebounds.

Indiana (4-3) was led by Robert Johnson with 17 points and De’Ron Davis with 16 as its three-game winning streak ended.

Duke turned what had been a back-and-forth game with a 10-4 spurt to close the first half, taking a 42-38 lead. When the Blue Devils jumped to a 52-42 lead just 94 seconds into the second half, it looked they would pull away.

Instead, the Hoosiers charged back with seven straight points, tied the score at 57 on Collin Hartman’s long 3-pointer and took the lead when Hartman made two free throws with 12:17 left to make it 61-59.

Neither team could take more than a two-possession lead until Gary Trent Jr.’s three-point play gave Duke an 86-77 lead with 2:24 left.

Duke: The Blue Devils might be even better than advertised. They’ve won nine games in 20 days, beaten two Top 10 teams and now have their first true road win. No, it wasn’t pretty, but they get the job done.

Indiana: The Hoosiers fought valiantly. They played defense, took care of the ball and hung around most of the game. It was an impressive performance, a better effort and the first big indication that new coach Archie Miller is getting things on track in Bloomington.