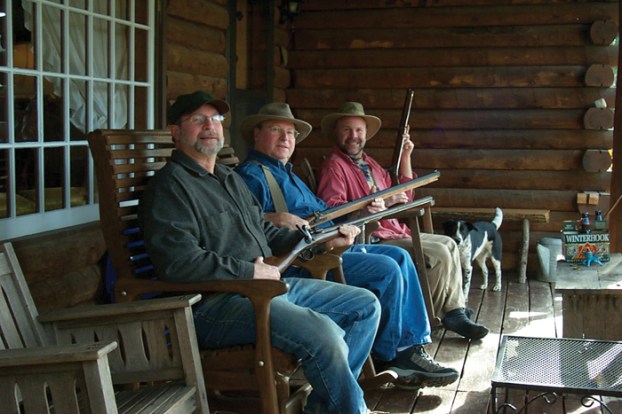 Brothers John, Donald and Charles Kesler fancied themselves as playing lead parts in the movie 'Second Hand Lions' when they posed for this picture on the porch of Donald's log house at Linville Falls. Submitted photo

Writer and his book Submitted photo Donald Kesler has authored several self-published books, one of which, ‘The Hill of Gold,’ weaves in stories from Kesler’s high school days in Salisbury and some mostly fictional intrigue from the old mining village of Gold Hill. Submitted photo Donald Kesler has authored several self-published books, one of which, ‘The Hill of Gold,’ weaves in stories from Kesler’s high school days in Salisbury and some mostly fictional intrigue from Gold Hill.

SALISBURY — Donald Kesler’s self-published “The Hill of Gold” comes in at fewer than 100 pages, but it still has everything you might be looking for in a novel — a suspicious fire, murder, scandal, nostalgia, history and romance.

And most of the story unfolds in Rowan County in the late 1950s.

Kesler, 74, is a nuclear engineer who discovered in retirement that he has a penchant for writing. As he entertained his grandchildren with stories from his imagination, they begged him to write them down.

He decided to give it a try.

“As I wrote ,” says Kesler, who lives in Matthews, “I found I really had a lot to put out there.”

All told, Kesler has now self-published four books, copies of which mostly wind up in the hands of friends and family members. He considers his first book, “Meadowake Trilogy,” an Old World fantasy made up of three different stories he used to tell his grandchildren.

“Jestershire” and its sequel are English village mysteries that were inspired by Kesler’s trips to Ireland, Scotland and England.

“I try to make it strange a little bit to make it interesting,” Kesler says.

But “The Hill of Gold,” which he wrote and published in 2014, brings things much closer to home. It’s filled with names, places and practices — such as “dragging” Main Street in Salisbury — that are familiar with any longtime resident of Rowan County.

Though Kesler says all the character names are changed to protect the innocent, he weaves nostalgic tales from his teen years at Boyden High School in Salisbury into a story of intrigue whose backdrop becomes the old mining haunts of Gold Hill.

The Gold Hill side of the story centers on the real-life death in 1969 of an old mining engineer, C.R. Hays, who was killed in a fire that destroyed Gold Hill’s hotel and assay office. Kesler took poetic license and had Hays’ death happening in 1958.

From that launching pad, Kesler brings in fictional elements such as illegal dumping, a lost vein of gold, a mysterious man in a black suit and a county coverup. Otherwise, the story puts its teen characters into many of the situations Kesler and his friends found themselves in during high school. Submitted photo In the late 1950s, Donald Kesler, left, and his high school friend Rolland Bassinger prepare for a rocket launch, which was recorded by a Salisbury Post photographer.

It’s evident pretty quickly that Kesler himself is a kid named Skip Kerr, the ultimate “wing man” to a friend who is much more outgoing with girls.

It’s also obvious that when Kesler describes the first date Skip has with a girl named Robin Brown from Granite Quarry, he’s talking about his earliest days of getting to know Roberta Brown Hudson Kesler, his wife of 53 years.

“Most of these things are things that happened,” Kesler says.

Donald and Roberta Kesler return to Rowan County regularly, often visiting her sister Annie Marie Seaford. Donald owns one-fourth of the Kesler Farm, which had belonged to his grandfather. As the fictional Kerr Farm, it figures prominently in one of the chapters of “The Hill of Gold.”

“We did have gold mines on that property,” Kesler says. “… I recently wrote a Christmas story about it.”

Here’s a postscript about the farm from “The Hill of Gold”: “The 1950s were an idealistic time and exploring the gold mines on my grandfather’s farm was part of my life then. To this day the farm remains the center point of our extended family and serves as the gathering place for weddings, reunions and many other happy family events.”

Kesler also writes about underground tunnels in downtown Salisbury and has some of his teen characters temporarily being lost in them. This is one thing that never happened.

“I just heard (the tunnels) existed,” Kesler says. “I understood they went to all the major businesses.”

As a youngster, Kesler always held a fascination for the Empire Hotel, which he says was populated by a most diverse set of characters. In “The Hill of Gold,” he describes a man who has to have been George McPoole, otherwise known as Lord Salisbury.

Kesler also mentions some of the little people, circus performers who ended up settling in Salisbury for good or over the winters between circus seasons.

“I guess as a kid,” Kesler says, “I didn’t realize how unique things were.”

“The Hill of Gold” also recounts the true story of when a 6-year-old Donald (Skip in the book) and his father had stopped at a Blue Ridge Parkway overlook. A black bear emerged from the woods and came to a worn path at the base of the overlook’s wall, apparently hoping the people above him would drop some food.

The young Donald climbed onto the wall to get a better look and fell directly onto the path behind the bear, who had just made a pass. Kesler still remembers the bear turning to look at him on the ground.

The young boy knew to get out of there quickly.

“Who knows how high that wall was? Probably 8 feet,” Kesler says. “I went up there like a monkey, I was told. I don’t know if my mother ever found out.”

In an autobiography he’s writing, Kesler says he recalls how he felt he was a superhero at a young age because of the way he had escaped the bear.

As for that autobiography or memoir, Kesler says he hopes he can leave copies to his children, grandchildren, brothers and maybe even cousins.

“Nobody else in the world is going to want that,” he says, laughing.

Kesler grew up on Holmes Street in Salisbury with brothers John and Charles.

John Kesler lives in Faith and is a retired dentist who had a practice in Landis. Charles Kesler is a well-known artist with a shop along Biltmore Avenue in Asheville.

For some 40 years, the boys’ mother, Elizabeth, operated the Jack & Jill nursery in the basement of their home. One of Donald’s high school friends, Rolland Bassinger, bought the Kesler home and has done a beautiful job of remodeling it.

“I’m so happy about it,” Kesler says.

There’s a character based on Bassinger in “The Hill of Gold.”

Donald Kesler graduated from Boyden High in 1960 and became a nuclear engineer through his studies at N.C. State. He spent 15 years at Newport News, Virginia, working for the private yard that built aircraft carriers, cruisers and submarines.

“I felt like I was in the Navy,” Kesler says.

Several of the characters he describes from his high school days in Salisbury — four to be exact, including Kesler — ended up being engineers together in Newport News.

Kesler later changed jobs to work as a nuclear engineer for Duke Energy. He settled in Matthews, was based in Charlotte and would pay visits to all the nuclear plants in Duke’s system.

Donald and Roberta married right out of college. Kesler can’t believe he has been retired for 15 years. Two of his older grandchildren — he and Roberta have six — already are studying engineering at Columbia University and N.C. State, respectively.

At present, Kesler says he is writing a sequel to “The Hill of Gold.” It will touch on Rowan County’s Peter (Marshall)) Ney and his supposed connection to Napoleon.

“I have written about half,” Kesler says. “I’m bogged  down. I don’t know where to go from here.”

Kesler recalls fondly the elementary school field trips he and his classmates took to places such as the Old Stone House and Third Creek Presbyterian Church, where Ney is buried in the church cemetery.

“It’s really, really surprising what you can remember from the fifth grade,” Kesler says.

Kesler confesses to several other writing projects he has started but has yet to see through.

“I probably have 10 books sitting in that computer,” he says. “That’s the nice thing about the computer. You can get back to it and easily start moving again.”

Donald Kesler’s books can be purchased through Amazon and Kindle. You can also email him at dorokesler@aol.com to ask about print copies.

SALISBURY — Within five minutes of meeting Tamara Brendle, you feel as though you’ve made a new friend. “She is... read more