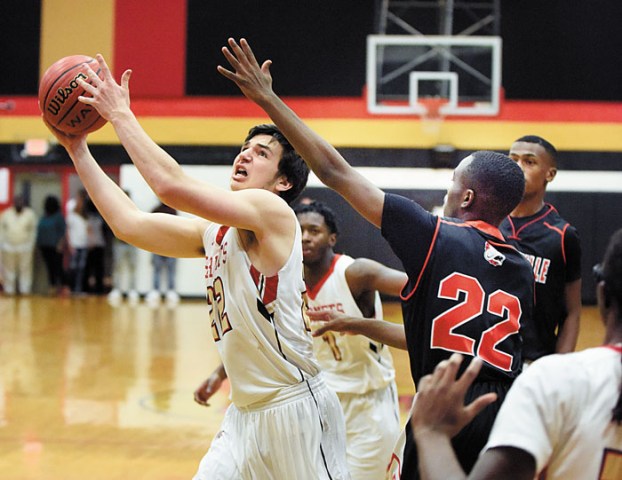 SALISBURY — Oshaun Robinson’s shot in the lane as time expired in the first overtime spun in and out, and he briefly dropped his head.

But Robinson came back with the game-sealing play in the second overtime, a steal and layup combination that clinched the Hornets’ zany, 91-86 win against visiting Thomasville that was frequently a festival of fouls.

“I’m a senior, and I needed to show some leadership,” Robinson said. “I had to show up and play, and one way or another, we had to find a way to win.”

There were 29 whistles before halftime in the Central Carolina Conference opener for both teams, but a lot of those parades to the foul line ended fruitlessly for both teams — with clanging free throws.

Thomasville standout Cameron Whiteside poured in 29 points. He was tough for the Hornets to keep off the glass. Nydrick Jenkins added 21.

Fisher laid in three early buckets and was Salisbury’s most consistent source of offense, but he had two fouls after three minutes and was saddled with three personals by halftime. Coach Bryan Withers’ Hornets managed a 39-33 lead at the break.

Fisher’s fourth foul came contesting a drive by  Jenkins with 2:13 left in the third quarter. He sat down again, and the Hornets held a precarious 56-54 lead after three.

Coach James Atkinson’s Thomasville club pushed ahead by six points and appeared to have the game under control late in regulation, but Baker calmly stroked a 3-pointer from the left wing with 31.8 seconds left to slice the Bulldogs’ lead in half. A steal and layup by Cameron Gill and a free throw by Gill that followed a wild, physical scramble in the lane, got the Hornets even at 74-all. Salisbury missed two shots in the lane that could’ve won it, and the teams headed to overtime.

Baker scored at the outset of that first overtime for a 76-74 lead, but the Hornets didn’t score again.

Fisher had the ball in the paint and offered multiple post moves, but he missed his shot and then got his fifth foul fighting for the rebound.

Whiteside’s free throws accounted for the only Thomasville points in the first overtime. Robinson missed his gliding, banking opportunity at the end, and the teams headed for a second OT period.

Baker hit another 3-pointer early in the second overtime, but Thomasville fought back to tie at 82-all.

Thomasville got back within 88-86 with a pair of free throws by Justin Cunningham with 25 seconds left.

Thomasville could’ve forced yet another overtime with a 3-pointer, but with 10 seconds left, Robinson darted in for his steal in the backcourt. His finish at the rim finished the Bulldogs.

“We just had to keep playing no matter what,” Salisbury veteran JaQuan Davis said. “We stayed together. We worked hard and we beat a really good team.”

Duke now unanimous No. 1, Arizona falls out of AP Top 25

By Aaron Beard AP Basketball Writer Duke pulled off two big comebacks to become the unanimous No. 1 in the... read more